What is the cause of tire marks at the extreme ends of runways?

At LAX, planes (usually) take off from east to west. On the west end of the runways there are dark tire marks.

What is the cause of thesey tire marks? Failed take offs? Late landings? Something else?

The marks are left by the tires of landing planes when they touch down -- that is, ordinary routine landings.

The wheels of a landing aircraft do not start rotating before they hit the runway -- so right at the moment of touchdown, the wheels will at first skid along the runway surface until the friction between tires and runway has delivered enough angular momentum to the tire to spin it up so it matches the ground speed of the landing plane. Once that happens, the wheel will roll normally.

This skidding causes the skid marks you have observed.

Even if the runway is usually used in the east-to-west direction, there are still enough days where landings are from the west that both ends of the runway will collect tire marks. How many days that are doesn't really influence how black the runway gets, only how long it can go between having the rubber buildup cleaned off.

At the few airports that are really only used in one direction (such as the famous Princess Juliana Intl Airport at St. Maarten, which does not even have charted approaches from the east due to terrain obstacles) you will find the tire marks only at the touchdown end of the runway.

That would be caused by the tires which are not rolling start rubbing away on the runway on touchdown. Since the tires are not moving, it is going to "scrape" on the runway and leave a mark. This problem is addressed by this question. It also produces some smoke as you can see in the image. 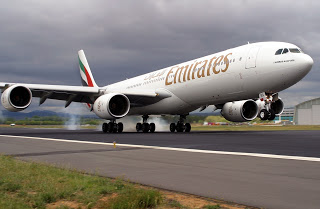 Same thing happens when a car spins on the road.

I can't find the source for this.

The reason for the marks is that this is the touchdown zone of the runway. The aiming point for landing is the 1,000' marker, the pair of solid white stripes. This is where the ILS glideslope and visual landing aids are aligned. Planes to float past the touchdown marker because of the flair at the end of landing so the densest tire marks tend to be at and just beyond the marker.

Not the answer you're looking for? Browse other questions tagged landing takeoff runways or ask your own question.

75
Why are aircraft tires not pre-spun prior to landing to preserve them?
6
Is it feasible to replace brakes on airplanes with electric motor/generator?

3
How are takeoff and stall different from each other?
9
What are the safety concerns and efficiency benefits of two in-line runways?
11
What is the optimal sequence of departures and arrivals on a single runway?
33
Southwest corner of LAX has peculiar airplane parts, what is this area?
8
What are the pros and cons of practising figure-eight landings on perpendicular runways?
27
Why do airports have directional runways instead of a large area to operate in any direction?
18
What's this turquoise stuff covering the overlap between the blast pads of KBOS runways 04L and 09?