How much efficiency gain can be attributed to aircraft handling?

Since the beginning of commercial jets, constructors thrived to make planes more fuel efficient. I assume most gains since then come from cleaner aerodynamic design, weight savings, and engine design.

However, these are not the only factors to take into account. For example, we have also became better at predicting meteo, or transmitting live information about airstreams so that planes can spend more time in the most favorable zones. Traffic control can also improve fuel efficiency by optimizing the landings of planes or reducing taxi/idle time.

How much of the gain in efficiency can be attributed to this factors ?

Another way to phrase it would be: How much more fuel efficient would it be to fly an old plane with modern avionics today?

In a paper written in 2010 several factors are laid out in addition to aircraft design that have improved fuel efficiency and cost over the years and possible improvements in the future. Several areas were highlighted.

It is estimated that up to 8% of all aviation fuel is wasted as a result of the inefficient routes aircraft have to fly.

The paper cites flight management systems on newer aircraft as contributing toward efficiencies in routing.

On certain oceanic routes, flight control computers are automatically plotting their own, most efficient routings with some impressive results. One airline, for example, has been working with Australian air traffic management to save almost 10 million litres of jet fuel and 772 hours of f light time in five years. It does this by exploiting the jet streams and tailwinds in the Indian Ocean.

The following charts show projected savings for implementation of NextGen air traffic systems in the US and SESAR in Europe. 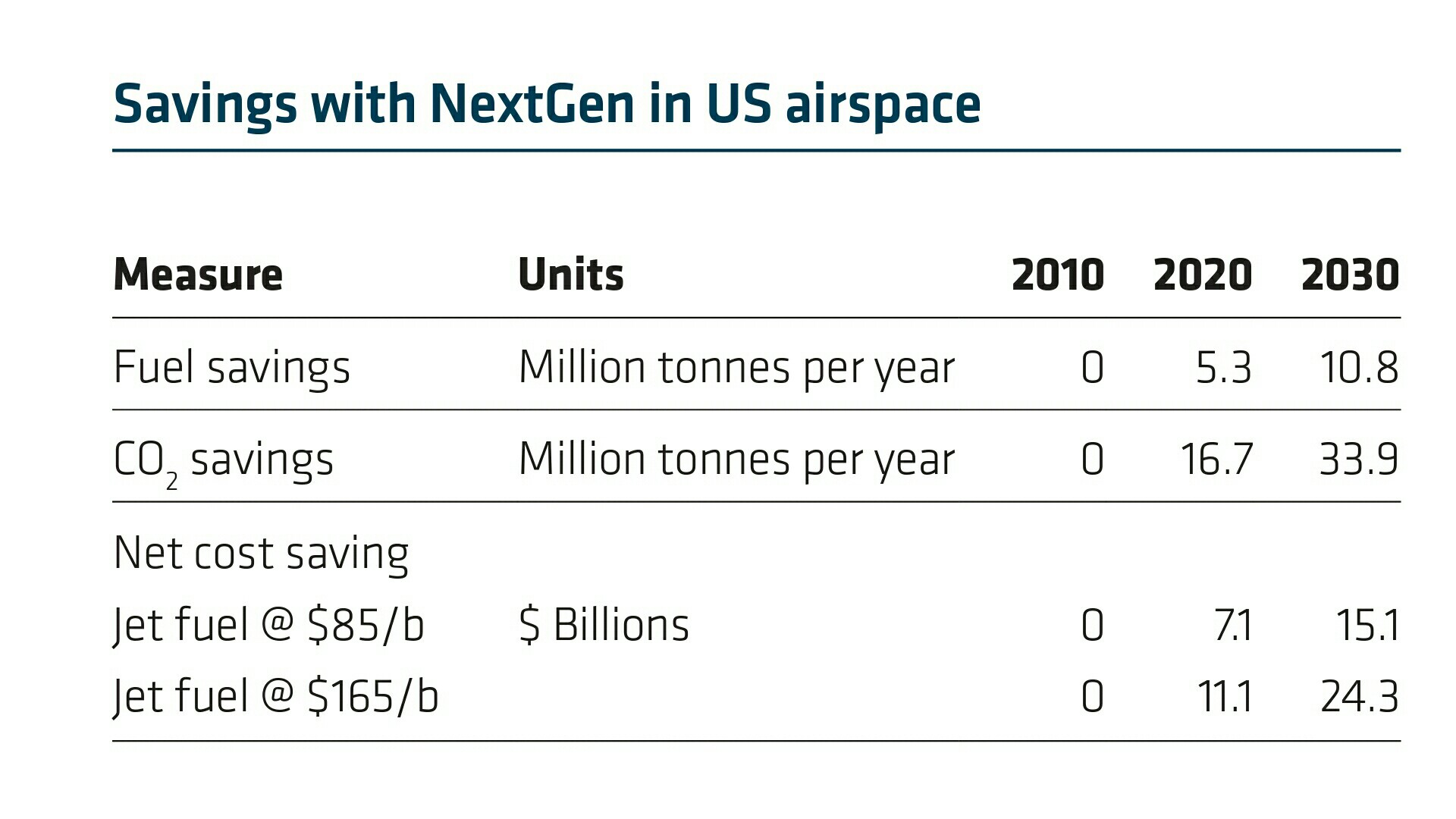 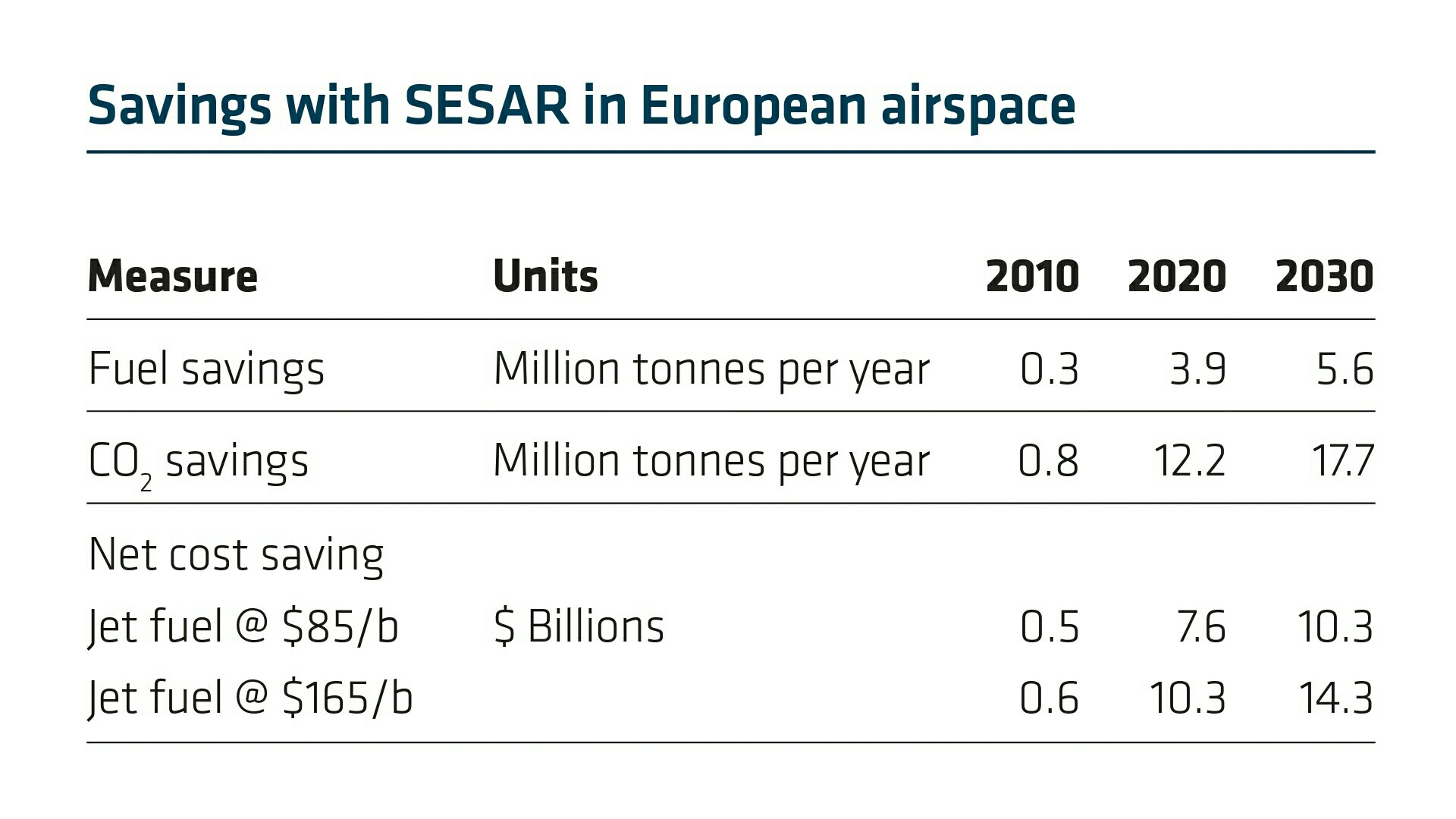 Being able to climb continuously to cruise altitude can save on fuel.

A number of airports and airlines are trialling the use of so-called ‘green departures’, allowing pilots to take-off and climb to the optimal cruising altitude in one smooth, continuous ascent. This is in contrast to the traditional method of climbing to the cruising altitude in several steps. By using this new departure method at one airport alone, some 10,000 tonnes of fuel and 32,000 tonnes of carbon dioxide were saved in one year alone.

Similarly to climbing, fuel can be saved by avoiding stepped approaches.

In trials, fuel savings of up to 40% during the approach phase have been demonstrated. This equates to between CDO [continuous descent operations] vs stepped approach 50 and 150kg of fuel depending on the level at which CDO is commenced and the aircraft type. Up to 150,000 tonnes of fuel a year, or 500,000 tonnes of CO2, could be saved in Europe alone if CDO approaches were more widely adopted.

Satellite based approaches and departures

Using satellite-based and on-board precision navigation systems such as “Area Navigation” and “Required Navigation Performance” capabilities allows ANSPs [Air Navigation Service Providers] to re-design airspace and procedures so aircraft can fly automatic fuel-saving routes into and out of the busiest airports in the world. These new departure routes have reduced departure delays of more than 2.5 minutes per flight at one airport since their introduction. Annual fuel savings are estimated at $34 million, with cumulative savings of 105 million from 2006 through 2008.

Fuel is saved by using single engine taxi or tugs where appropriate.

Another place more efficiency can be garnered is by installing ground electrical power to reduce APU usage.

studies suggest that up to 85% of APU use can be reduced if groundbased electrical power systems are available, cutting the fuel bill, per gate, by $100,000 a year.

Another costly problem is flight delays. Aircraft end up sitting on the ramp or taxiway burning fuel waiting for clearances.

In the United States alone, the cost of burning fuel on the ground as a result of delays to the airline schedule amounted to over $5 billion in 2008 alone.

The following graph represents the potential fuel savings projected into the future broken down by technological improvements in aircraft design and fuels, operational issues such as ground handling and delays, and infrastructure such as airspace availability and routing. Of course any future projection is speculative. 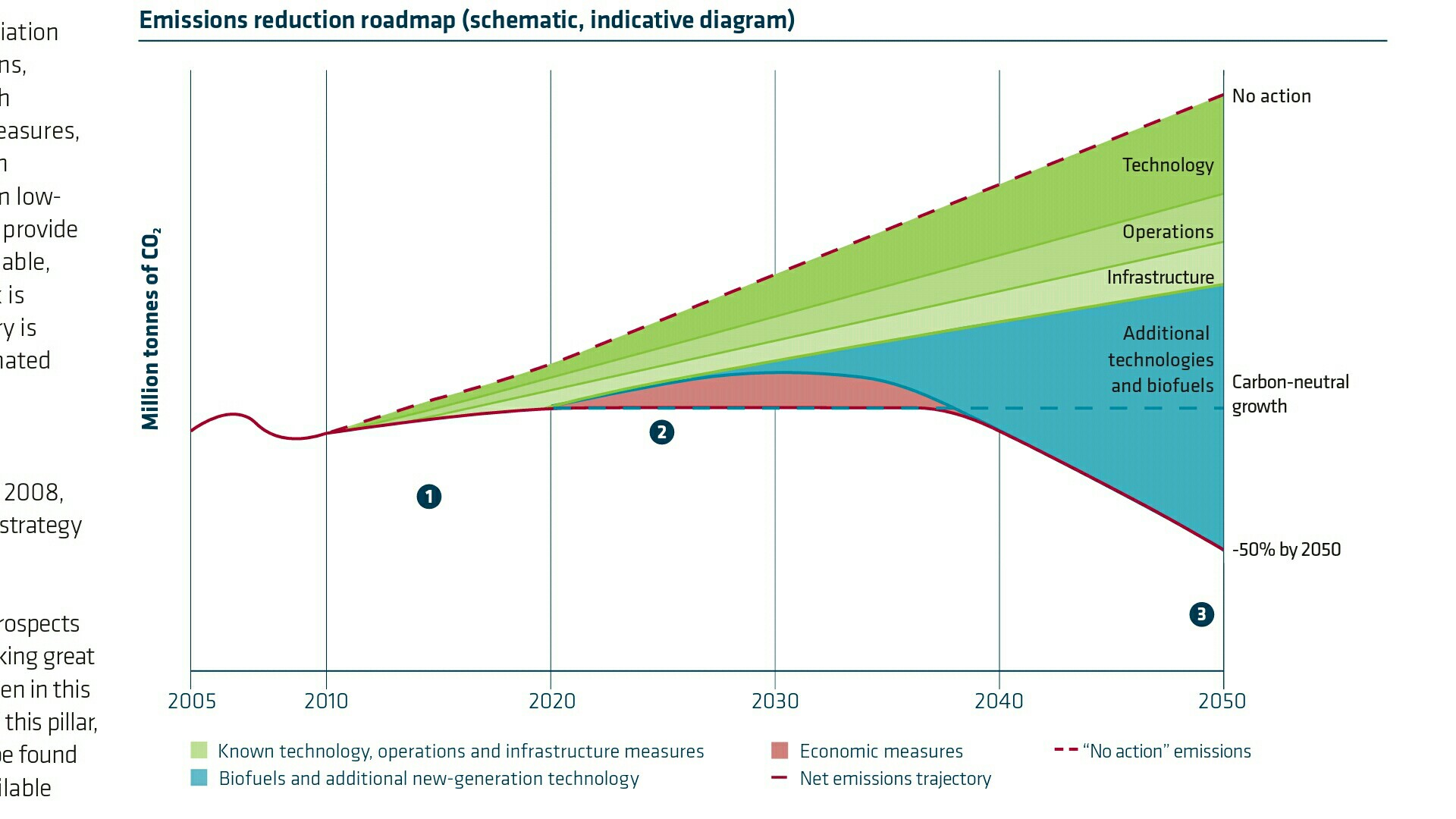 Not the answer you're looking for? Browse other questions tagged commercial-aviation efficiency or ask your own question.

3
How can you explicate the efficiency of a turbofan engine with Carnot's theorem?
3
Can lift be equated to how much air is moved?
4
How much can a plane benefit from another planes wake?
2
How does fuel efficiency depend on wing configuration?
2
How can I calculate turbofan efficiency as a function of turbine inlet temperature?
0
How does 'standalone' propeller efficiency change with altitude?
0
Can thermals or high density altitude improve fuel efficiency?