How does the dihedral angle work?

I've been looking for this topic on the internet but I don't have enough concrete answers. Suppose we have a plane with dihedral and it has a suddenly swinging to the right (watching from the nose of the plane), so the right wing goes down. I'm trying to understand why the right wing generates more lift than the left wing when it has a sideslip. I have seen in some sites that the sideslip induces a flow from the tip to the root and this makes the right wing increase locally the angle of attack, hence the lift of this wing increases too.

But, why the right wing increases the angle of attack? I think it couldn't be possible because the sideslip flow is in a different plane respect the mainstream.

Basically, dihedral effect is that during banking, the 'lower' wing will experience a higher angle of attack compared to the 'higher' wing, and a result, a greater lift. The resulting net force and moment reduces the banking angle, reducing stability. 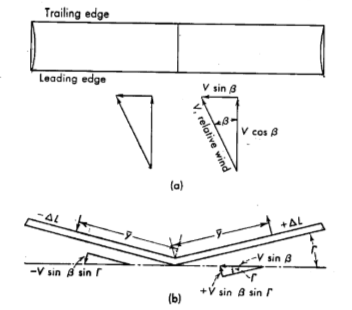 Note: The notations are different in the figure; but the principle is the same.

For our purposes, we can take the sideslip velocity ($u \cdot \sin\beta$) as $v_{y}$. Now, consider two sections from the wing - one each from the 'lower' and 'higher' sides. The induced velocity is of the same magnitude in both the sides, while the direction differs, as can be seen from the above figure. 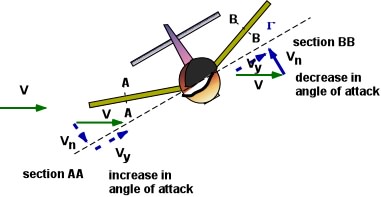 For small angles, $v_{y}$ is nearly equal to $u \beta$. The induced angle can be given as,

From the earlier relations, we have,

The explanation lies in the fact that a rolled wing creates a oblique relative wind, and that a wing with a dihedral angle seen from an oblique direction is having a larger angle of attack on the side in this direction:

Because of the dihedral angle, for the wind coming from an oblique direction on the right of the aircraft, the right wing shows a larger AoA. This is even more important for a larger dihedral angle.

On the image below:

The key to see what will happen is to understand the right wing now develops more lift than the left wing, the difference being proportional to the dihedral angle. As soon as this is clear, we can anticipate the roll angle will be cancelled automatically, without pilot action.

Let's look at the rolled aircraft:

Angle of attack seen from the relative wind standpoint:

Note: The difference appears only when the wind is off axis. This means the dihedral effect on the angle of attack exists only when there is a sideslip.

Of course because the angle of attack is larger on the right, a recovery moment starts developing and counteracts the initial roll. The aircraft returns to the horizontal after some damped oscillations around the longitudinal axis.

The lateral stability is of prime importance for general and commercial aviation aircraft. The dihedral angle is the most simple mean to obtain this stability, there are others.

Stability from swept wing, due to spanwise flow

Lift is generated taking into account the airflow parallel to the chord which is accelerated. Air moved in a perpendicular direction is not accelerated and doesn't create any lift, see left image:

(By principle, a swept wing decreases the amount of lift created, this is compensated by other benefits that make it useful anyway).

If the swept wing receives wind from an oblique direction, like during a sideslip, the available air energy will not be lost in the same proportion for each wing (see image on the right, above).

The chord of the right wing is better oriented in the airflow coming from the right, and a larger ratio of air generates lift compared to when the airflow comes frontally. This is the contrary for the left wing. This effect also contributes to lateral stability.

The dihedral angle participates to the roll stability, along with other factors. The area where the dihedral plays a critical role is the stabilization of the spiral mode (or spiral divergence).

The spiral mode, like the Dutch roll and the phugoid, is an oscillatory mode that can either self-decay with time (stable) or constantly increase (unstable). The unstable spiral mode happens this way:

If this effect is not detected and corrected, which can easily happen in IMC when the natural horizon is not visible, the aircraft continues to sideslip and yaw, while the vertical component of the lift decreases due to the roll, creating a dangerous spiral downwards which can lead to structural damages or ground collision.

The cycle is the result of all dynamic forces in action on the aircraft, in particular the lift on each wing and the position of the center of pressure.

The use of a dihedral wings affects the forces and their relative timing, and transforms an unstable spiral mode into a stable one. This is facilitated by also using a smaller vertical stabilizer and rudder, which in turn can create an unstable Dutch roll, or a shorter cabin.

Thanks to ahmetsalih for the Learjet 3D model available at TF3DM.

Dihedral generates a stabilizing roll torque due to the difference in angle-of-attack experienced by the left and right wings during a sideslip.

Furthermore, it's important to note that sideslip cannot be explained simply by noting that when an aircraft is banked, the tilted lift vector contains a sideways component, or that "from the point of view of the aircraft, lift is still acting in the plane of symmetry, but gravity does not and will cause it to sideslip", as is sometimes stated. (For example, we find something close to this in Martin Simons' well-known book "Model Aircraft Aerodynamics".) Those are essentially Aristotelian concepts rather than Newtonian concepts. A continuous unbalanced sideways force component causes a turn, not a sideslip. Force causes acceleration, not steady sideways motion, and turning is a curvature in the flight path which is a form of acceleration.

Yaw rotational inertia can also play a role in promoting sideslip immediately after an increase in bank angle, but this is probably a minor effect.

Coming to the aid of the -5 @rbp answer, having been there, and a few items to improve the answer, and to respond to the question "how does dihedral work", as follows:

What is missing in our exaggerated 45 degree model is an evaluation of total lift, vertical lift, and center of lift relative to center of gravity.

What happens when the plane rolls? Vertical lift is lower and the plane SINKS. The aircraft now has a vertical direction component, there for a change in "relative wind".

Notice what effect a VERTICAL component will have on the wings. Obviously the zero degree wing will be rolled up from the relative wind (vertical component) until its angle is equal to the opposite wing, restoring the original attitude and lift condition.

The side force, created by the 90 degree wing, also adds side motion. The net motion of the plane is a slip down and to the side until the wings re-level. That's the aerodynamic part, but that's not all!

When the plane rolls, the center of vertical lift, relative to the center of gravity, moves out of alignment, creating a "yin and yang" roll torque effect which also helps right the aircraft.

Dihedral is present in many aircraft designs where cruising comfort is preferred and flight other than straight and level is uncommon. 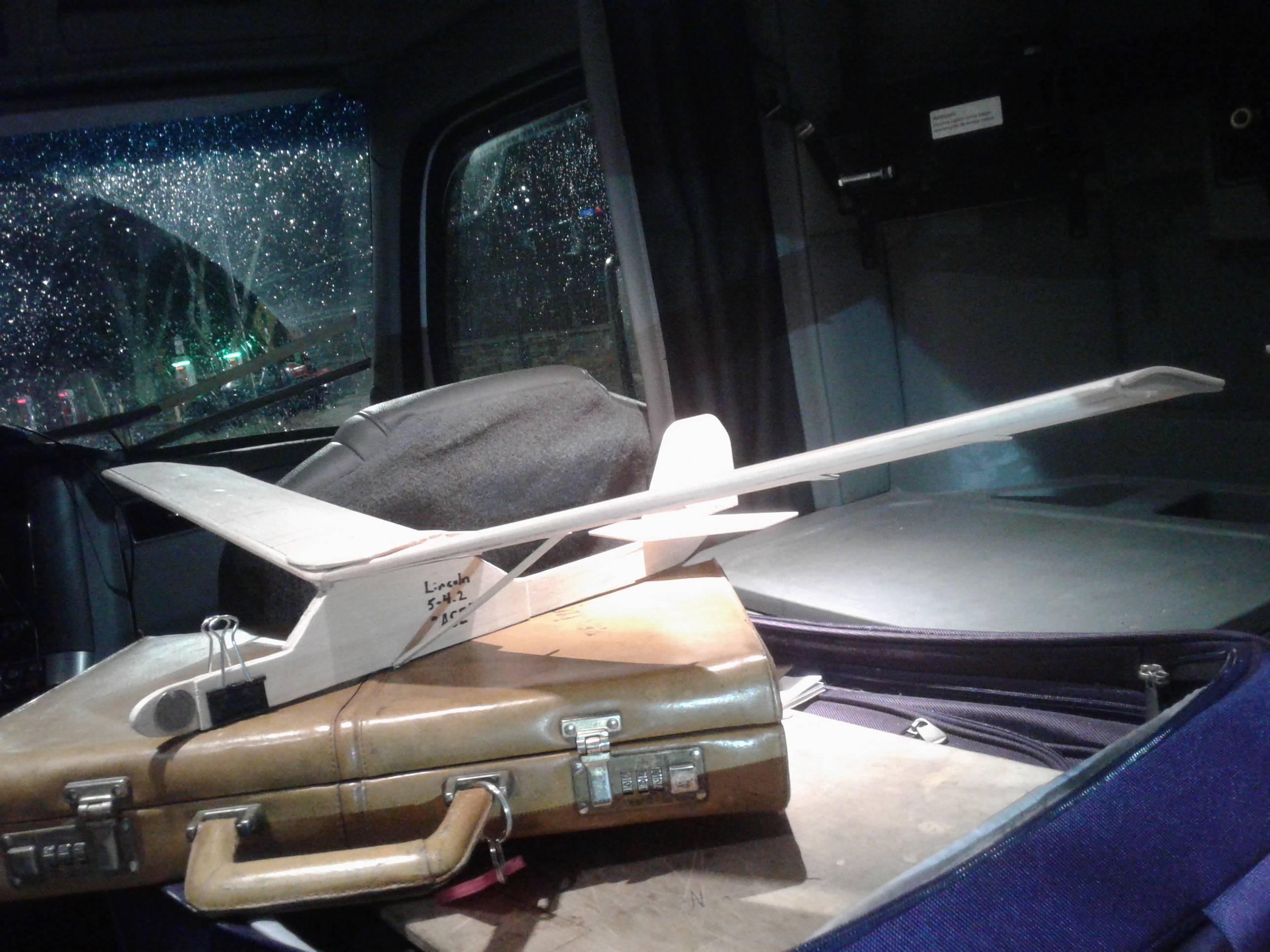 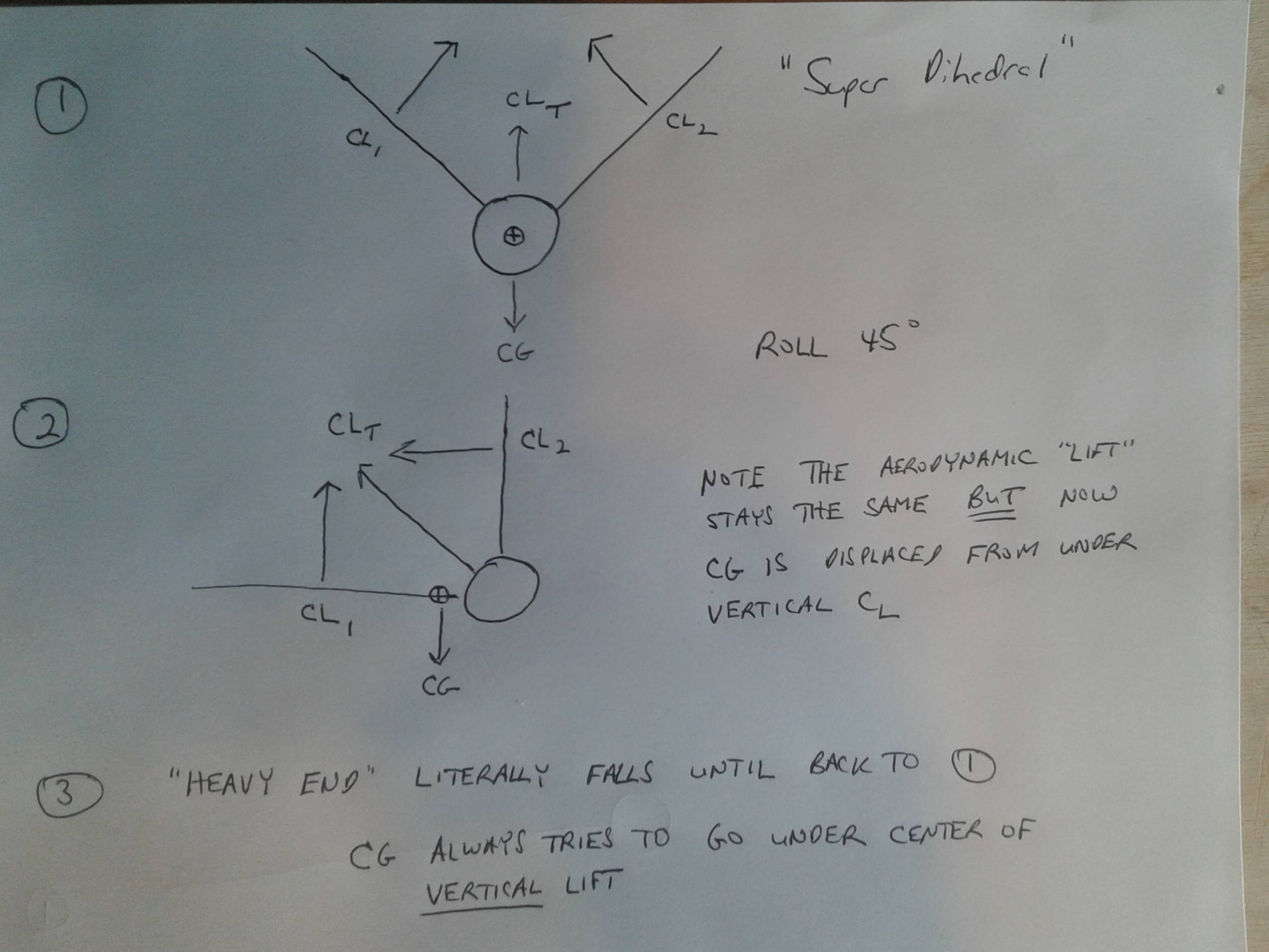 This is a very exaggerated diagram of a fuselage with dihedral wings.

When the plane is flying normally (top), both wings produce the same lift vectors.

Note: everything in this diagram is schematic and is not meant to indicate any specific mathematical or physics laws or formulas. 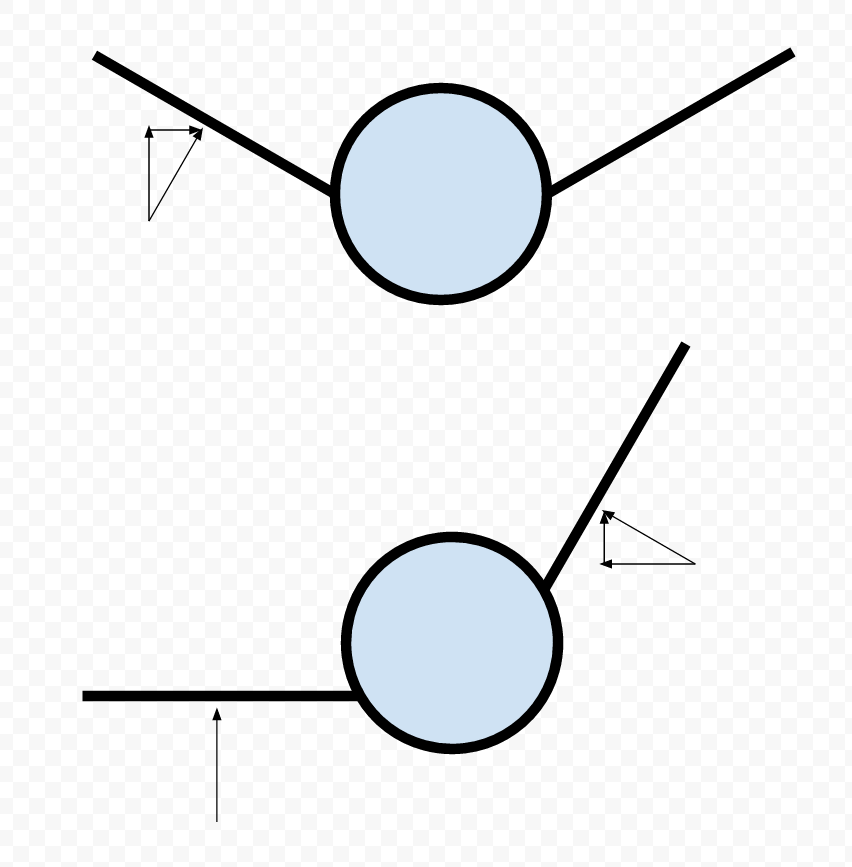 0
What are aerodynamical reasons behind slight dihedral or no dihedral at all?
12
Can all airliners be turned without rudder input?
12
What are the pro/cons of polyhedral cranked wings?
8
What is this "Supersonic French" aircraft?
18
Does slipping in turns allow higher climb rates?
10
Is this paragraph about the dihedral effect in the FAA's Glider Flying Handbook correct?
4
Does the dihedral effect happen during coordinated flight?
3
What is the reason why dihedrals are used when building a plane?
1
What is the dihedral angle of the A380?
1
What causes spiral mode instability and how do you minimize it instead of trying to dampen it?
See more linked questions

9
Why does the vortex created by wing affects its own angle of attack?
5
When approaching stall, why does the center of pressure move back?
3
What are the effects of the tilted lift vector in a banked plane?
4
How does the extension of inboard flaps raise the effective critical angle of attack of the outer wing?
14
How do paraglider controls work?
10
Is this paragraph about the dihedral effect in the FAA's Glider Flying Handbook correct?
2
How does the engine produce aerodynamic lift at high angle of attack?
3
How does downwash affect angle of attack?
2
How do coefficient of lift/drag variation with speed differs between swept and unswept wings?