Why are the fan blades mounted loosely?

In this question it is mentioned that the fan, compressor and turbine blades are mounted loosely in the disc. This is well demonstrated by this video posted by RedGrittyBrick.

The blades are loose in their "Fir Tree" blade mounts so that they can self balance. They are called "fir tree" because they are v shaped.

As the rotation speed and centrifugal force increases, they move in the mounts and establish individual lead/lag positions to achieve a balanced disc.

It will be understood that turbine wheels rotate at very high speeds of rotation, thereby generating large centirfugal forces tending to throw the blades outwardly from the wheel. By providing contact surfaces of equal and opposite slope with respect to the longitudinal axis of the root on opposite sides of root, the force components of the centrifugal force balance each other out. Periodic and other vibrations which might otherwise be generated are damped out and greatly minimized 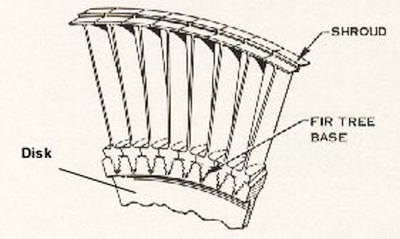 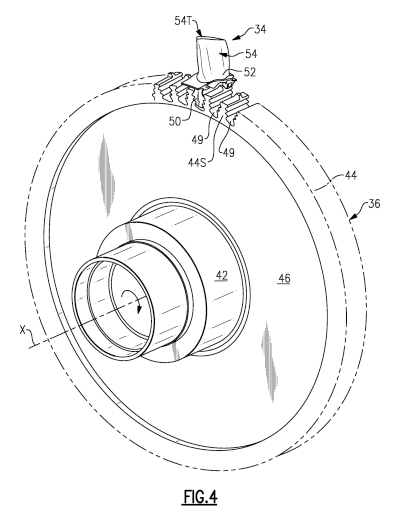 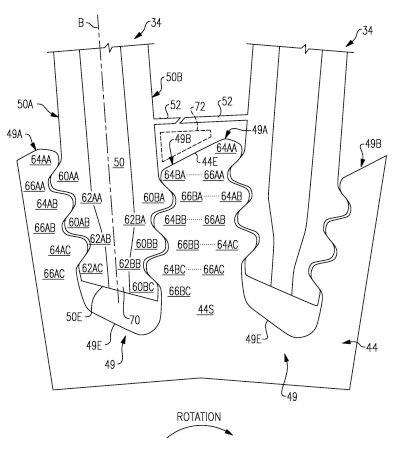 I's like to expand the answers on how this could reduce vibrations, as it was mentioned in a comment.

Therefore, I'd like to look at something completely different: When computers were equipped with faster and faster CD-ROM drives, the reduction of vibrations caused by small imbalances in the discs became more and more important. The solution is is shown below. The spindle which sets the CD into rotation contains a circular shaped grove with a few metal balls, which can move freely in the grove. It looks a little like a ball bearing which lost some balls: 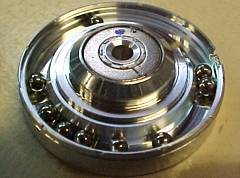 Let's consider there are just four balls. If the disc is perfectly balanced, the balls will arrange themselves so that all centrifugal forces (black arrows) point away from the axis of rotation and cancel out each other. The center of gravity (COG) is located on the geometrical center, which is also the axis of rotation: 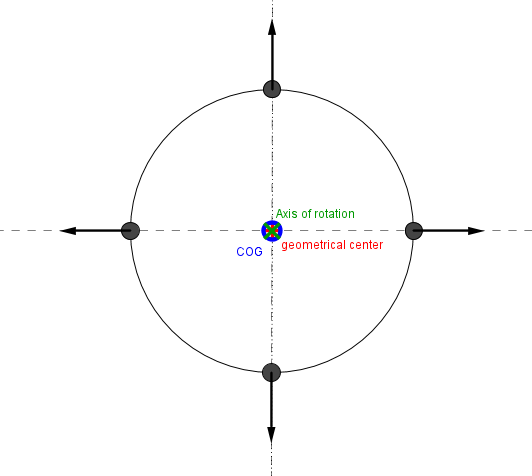 Now let's consider some imbalance, modeled as additional mass here, which will shift the COG away from the geometrical center towards this mass (My library put barcode stickers on their CDs...)

This is a resonance effect and a bit hard to understand. Maybe, an analog: Hold a spring with a weight at the lower end. When you move your hand up and down slowly, the weight will follow your movement exactly. But when you move your hand much faster than the resonance frequency of the system, your hand an the weight will always move in opposite directions. (I guess, this still does not make it clear, but I have no better explanation...)

However... What happens to the balls?
I have drawn the centrifugal forces (black) on the four balls in my last point / right animation: 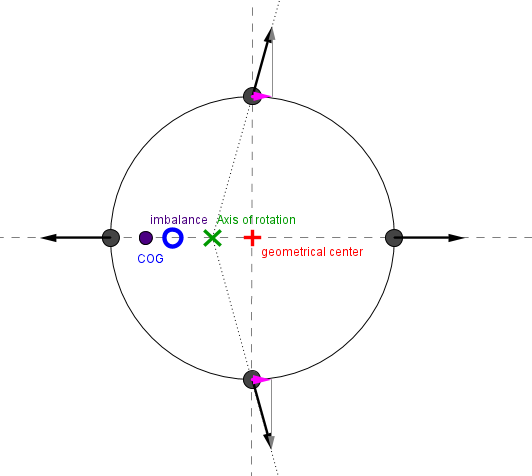 The disc rotates around the green x instead around the geometrical center (red +). The centrifugal forces point away from the green x. With respect to the geometrical center, the force on the upper and lower ball can be dissected into a radial (gray) and tangential (magenta) component. As the balls can move freely in the grove, they will follow the tangential force to the right. This means, some mass shifts from the left to the right side and as consequence, the COG and the axis of rotation are much closer to the geometrical center.
Finally, this principle can eliminate the vibration to a large extent.

Coming back to a fan, the loosely mounted blades act like the balls. As the fan is for sure already well balanced, it is sufficient if they can just tilt a little in their position.

There are a few reasons for assembling the blades loosely in the gas turbine engine.

You need to realize just how big the radial force on each blade (caused by the rotating shaft) actually are, when the engine is running at in its normal operating speed range. Those centripetal and centrifugal forces are literally thousands of times the weight of the blades. On each fan blade of a large turbofan engine, the radial load on the blade root is more than 100 tons (or tonnes, for non-US readers).

There is no practical way that you could clamp up the blades with forces as large as that when you assembled them, even if there was any point in doing so. It's more sensible to design the fan so that is easy to assemble, and let it clamp itself rigidly when it is operating. The only disadvantage is that if the rotor is turning very slowly, you can often hear individual "clicks" from the blades moving about as they rotate, which can frighten the uninitiated.

1
Why are Jet Engine fan blades (and other turbomachinery blades) cantilevered rather than being connected together at their outer edges?
37
Why was there a rattling noise coming from the left engine of A319?
13
How are helicopter rotor blades balanced?

19
Why are aircraft turbine blades made of nickel alloys?
8
In a turbofan, why are there no stators behind the fan?
13
What engine are these fan blades from?
1
In what way are the airfoils used for a propeller different from the ones used in turbofan engine?
6
How heavy are turbofan and turboprop propeller blades?
6
Are there any helicopter blades that fold in the middle?
0
Would large, low aspect ratio fan/propeller blades be more efficient? Why not?
4
Why are jet engine fan blades painted?
4
Why do some jet engines have fewer fan blades than others?