What is the relation between airspeed and rate of turn?

I am reading about aircraft maneuvering and the end of section check contains this question:

The correct answer is "higher" which is confusing me.

Independent of airspeed, angle of bank gives you the "G" force in a level coordinated turn. A 60 degree bank = 2 G's, at any speed.

At low speed, a given G force will give you a greater heading change than it would at a high speed. Driving your car at 10 mph you can complete a U-turn, 180 degrees of heading change, in a couple seconds without pinning passengers against the door, but at highway speeds, even a hard turn that does impose big side-loads will take much longer to give you that much heading change.

Related to all this is turn radius: at low speed, your turn radius for any given loading (bank angle) is smaller than it would be at a higher speed with that same loading/bank angle. Thus, even though you're going slower, you have less distance (circumference of the circle) to cover, and so you are able to complete the circle (or one 360th of it) more quickly.

((For the pedantic ones, everything here assumes level, coordinated turns. Change those assumptions enough, things can be different, but those aren't particularly instructive cases until the base case is understood.))

So, as the airspeed decreases, the rate of turn increases and vice versa—as long as the angle of bank is kept constant. 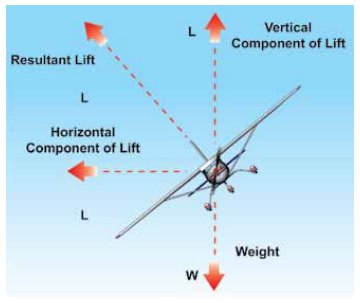 Forces in a turn, image from Instrument Flying Handbook

Rate of turn means how quickly the plane's nose is changing direction, or how tight a circle its making, turn radius, like a car. You can make a sharper turn at slower speed.

The airspeed will be slower as you travel through the air, but you'll change direction faster. This also creates G-forces than can damage the wings etc. so banking too much at high speed, you'll feel just like a car going to fast around a turn, and you'll naturally slow down a little.

0
What is the bank angle that should be sustained to move in a uniform circular motion?
1
Does the rate of turn increase or decrease by turning at a higher speed?
7
For light, GA aircraft, is there a "standard" turn, and what does that mean?
4
How can I compute the minimum possible bank angle for a turn with a given radius?
2
Which way to turn to return to runway for downwind landing-- into crosswind or with crosswind?
2
How do I make a simple model to simulate a banked turn?
0
How can one calculate the maximum instantaneous bank angle a plane can do in a certain time?