What is the significance of the speed of sound to aerodynamics and aircraft design?

This isn't just limited to aerodynamics, but also for example to the way the fuel/air mixture burns in a jet engine.

So, why is the speed of sound so significant for aerodynamics and aircraft design?

I presume that it is something to do with a limit on how fast information about the movement (or pressure changes) of air molecules (i.e cause and effect involving air molecules) can travel through a medium of those molecules, and that "speed of sound" is shorthand for that speed.

I assume that there are analogous issues around the speed of information of pressure changes in water, so that hydrodynamics has to deal with them too. I imagine that because is much less compressible than air, that the speed would be much higher, so perhaps less likely to trouble hydrodynamic designers and engineers.

I think my high-school physics seems to be more or less enough to deal with these concepts, but the language around speed of sound does seem to hide away some of the key ideas, and leads my intuitive grasp in the wrong directions.

Your question shows that you know that the speed of sound is the speed of small pressure changes in a fluid, and moving faster than that will give the fluid ahead no warning of an approaching disturbance. I will, therefore, dig a little deeper in my answer, fully knowing that I can only scratch the surface. I encourage you to ask more specifically if one topic piques your interest but is not sufficiently explained.

The speed of sound is significant in aircraft design mainly in:

In the combustion of gasses the speed of sound is of less significance than the speed at which a flame advances. This is more complex (PDF!) and depends on the turbulence level, mixing ratio, temperature and the activation energy for the combustion reaction to start.

To explain the influence of the speed of sound let me look at the molecular level: Air is a collection of molecules which zip around constantly, bumping into each other frequently. We express this with macroscopic parameters:

At rest, the frequency and intensity of these collisions is the same in all directions. If something moves through the gas at a speed far below the speed of sound, the collisions are still roughly of the same intensity all around. The local intensity may vary, but the molecules will stay equally distributed over the volume. This means that the disturbance will cause a change in pressure, but density will be unaffected.

Moving faster, the disturbance will cause more intense collisions in the direction of movement and will start to push the molecules together: Now it will also cause weak density changes, and those grow with the square of of its speed. To regain an equal distribution over space, the molecules will now move sideways (and up and down), and the pressure changes will reach farther out to the sides. When you compare the pressure fields at different speeds, the "faster" field will look like one made by a more narrow disturbance at lower speed. This effect is captured by the Prandtl-Glauert factor $(1-Mach)^2$. Scaling the Y- and Z-coordinates of an aircraft geometry (where X is in flight direction) with this factor will result in a geometry which can be calculated with incompressible methods.

At the speed of sound this factor has a singularity, so its application should be restricted to speeds below Mach 0.7. Above Mach 1 a similar transformation can be applied, now using the Ackeret factor $(Mach-1)^2$.

The ratio of density changes to pressure changes continues to increase such that in supersonic flow the density changes become dominant. This shows when looking at the flow in an expanding or contracting duct:

This different behavior is used when accelerating the compressed gasses flowing from an aircraft turbine: First the nozzle diameter is reduced until the gas accelerates to the speed of sound. To accelerate the gas further, now the diameter has to increase again in flow direction. The result is a convergent-divergent nozzle, a typical part of supersonic jet engines.

Now picture the aircraft in slow motion from the side as it slices through the air at supersonic speed: Since pressure increases while the aircraft body expands and decreases once it contracts, you will have two drag components in supersonic flow which do not exist in subsonic flow: Forward facing parts experience higher pressure and rearward-facing parts experience suction. This effect is called wave drag and makes supersonic flight inherently less efficient that subsonic flight.

The same effect also affects the pressure field around an aircraft which is moving close to the speed of sound. Its movement displaces air and has an effect similar to a contracting duct, accelerating the flow in its vicinity as long as the aircraft grows thicker in flow direction, and decelerating it again over its rear half where it contracts. Once this local flow reaches the speed of sound, it will accelerate further while the aircraft contour contracts, leading to a supersonic pocket of air which will not slow down. It does so eventually, collapsing in a local shock which can cause flow separation and high local drag. Even worse, this separation will affect the whole pressure field and reduce the speed increase, which opens a feedback loop which will make the shock fluctuate. This oscillating shock can excite vibrations, render control surfaces ineffective and can incite flutter.

To reduce the local speed increase the surfaces of airplanes can be swept so the flight speed can be increased without running into the aforementioned transsonic effects. Also, sweep will smear out the sonic effects when accelerating through Mach 1, so the drag peak around Mach 1 can be greatly reduced.

Around Mach 1 it is important to limit the rate at which the aircraft's body expands or contracts over the direction of flight, and the wider-ranging nature of pressure changes allows the designer to expand one part of the aircraft to compensate for the local contraction at a different part when both are at the same position relative to the direction of flight. The consequence of this is the area rule which shows in coke-bottle fuselages or big flap track fairings.

You're correct that the speed of sound is important because it has something to do with how 'information' is transmitted through the gas.

The 'speed' of sound is actually the speed of transmission of a (small) disturbance through the medium. Air is a compressible medium, in general. When there is an infinestimal pressure change generated at some point of the flow due to some disturbance (say, an airfoil moving), this will be propogated throughout the air as a pressure wave at the speed of sound.

Disturbances are propogated in the air due to collisions involving (randomly moving) molecules. Due to this, the air molecules in the path of the disturbance 'knows' that there is something coming on their way and try to get out. Consider the following image of an airfoil in a smoke tunnel. 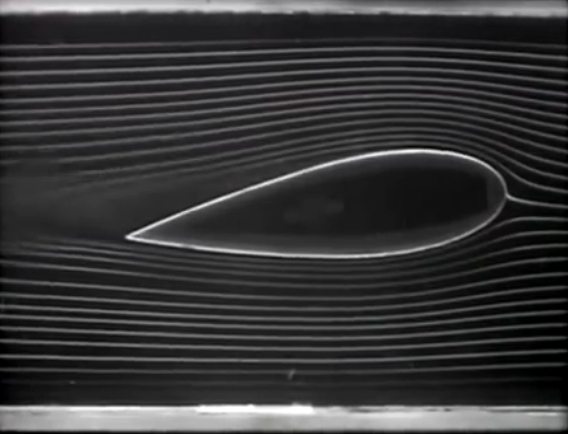 Here, you can see that the air (made visible through smoke) has already 'moved' out of way of the airfoil before coming into physical contact with it; this is because of the disturbance, which was propogated through the air at the speed of sound.

Now, if the flow velocity exceeds the speed of propogation of these disturbances, they will 'pile up' to form strong (pressure) waves, which we call shock waves. The following image shows a model of the X-15 in a wind tunnel. 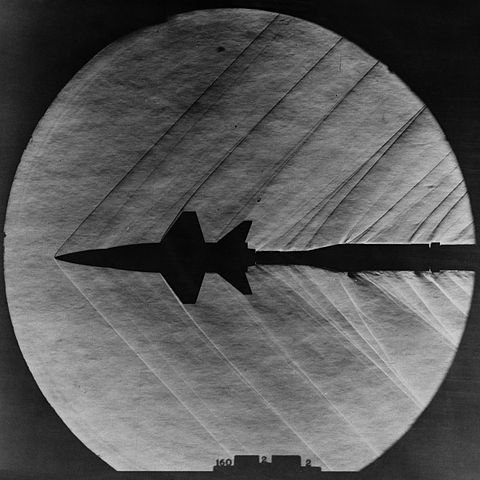 The disturbances are still being propogated; but the flow velocity is greater than that- the result is that the molecules have no way of 'knowing' that there is an object is on the way and pile up over it.

44
Why does supersonic flight detach airflow from a wing?
25
Why are adjustable area jet engine nozzles mostly limited to military use?
14
What is the "area rule"?
10
How is the area rule applied on airliners like the A380?

20
Why aren't modern helicopters quieter?
16
Why can't model aircraft be used to discover spin and stall behavior of manned aircraft designs?
47
Why is the Tu-95 so efficient despite having propellers that spin faster than the speed of sound?
36
Why do aircraft need a vertical tailfin, but birds don't? (and lots of fish do?)
5
Can a light glider without thermal protection land from the orbit, starting from the orbital speed?
2
Why does the local speed of sound decrease with temperature and not pressure?
4
Does the Boeing B787 have safety issues with its battery and windshield?
3
What is physics explanation for minimum sink rate airspeed?
1
Why did the Wright brothers take steps to increase the amount of vertical surface area forward of the CG on some of their aircraft?