Is there a big demand for transporting overseas for turbofan engines with nacelles like TrentXWB or GEnx by cargo airplanes ? If yes, what planes are used?

Engine nacelles are part of the aircraft and not the engine. I think you're asking about fully assembled engines.

Oversized jet engines are usually transported by road when possible; in case air transport is required, the Antonov An-124 'Ruslan' is your best bet. It is the only aircraft capable of transporting engines like the Engine Alliance GP7000 and RR Trent XWB. 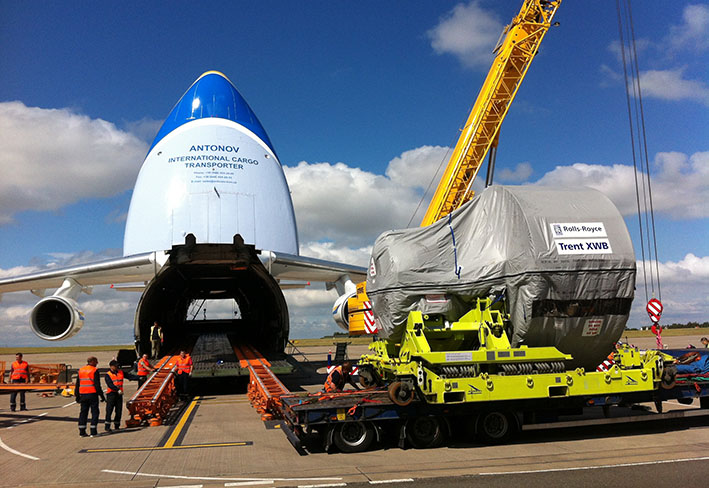 For smaller engines (or partially disassembled ones), other aircraft like the Boeing 747F and A330-200F are used.

Interestingly, this filing with US DoT shows the An-124 being used to transport GE GEnx engines from Rickenbacker airport to Seattle to ensure smooth production in Boeing factories.

I can't really answer this, but generally, there's no reason to transport fully assembled engines. They'd have to be taken apart into order to be installed anyway. The props would overbalance and overload the assembly used to raise and position the engine to properly bolt it in place. The cowling would have to be removed to allow access to connecting lines to the aircraft. Ditto the prop. Besides, in most engine changes, there's no reason to replace the cowling.

Not the answer you're looking for? Browse other questions tagged engine turbofan or ask your own question.

21
What are cowl flaps?
54
What is the difference between a turbofan and a turboprop engine?
33
Why do we never see high-bypass turbofan engines sharing the same nacelle on large airliners and similar aircraft?
0
How do turbofans and piston-engines compare in terms of maintenance costs?
7
Would it take 7 to 10 times more energy to lift a turbofan-helicopter?
9
Why does the CF6/CFM56 Turbofan Fan Frame contain 12 circular holes between the primary and secondary flow?
4
Can you fly 2000 miles on an engine that costs less than $500k? If so, what type of engine?