If there was an engine malfunction, could we breathe contaminated air?

If the engine on airliners has for example, an oil leak, can the oil or other substances contaminate the air on the passenger cabin? How would this situation be avoided?

Yes, it is possible for contaminated air to enter the cabin. The air pressurization is provided by the "packs" (air conditioners), which are in turn powered by the bleed air (hot air extracted from low stages of the turbine) of the engine: 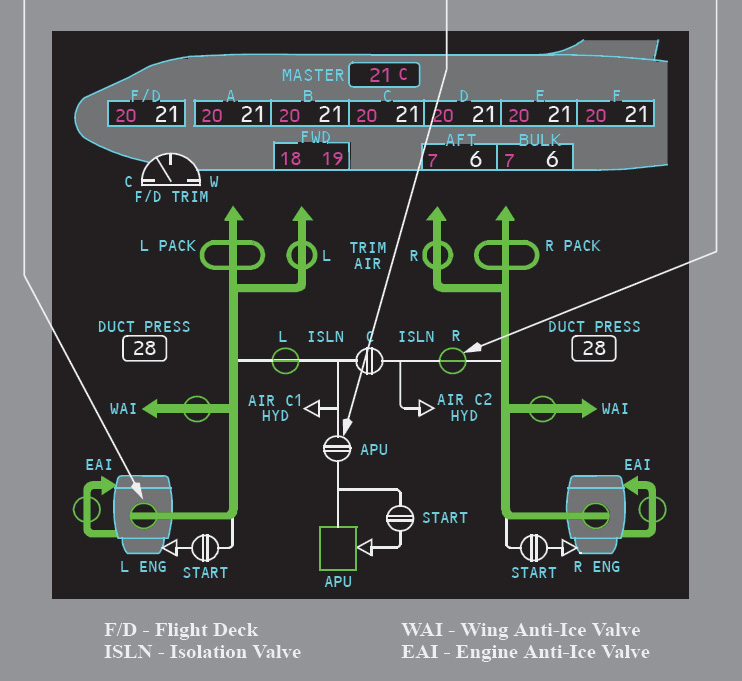 To avoid the problem, bleed air is shut when engine trouble is confirmed or suspected. For example, the Engine Fire checklist for the Boeing 737 calls for:

With one engine out, the cabin air is provided by the bleed air of the other good engine. With a dual bleed shutoff (or failure), you better get down right away.

Yes, an malfunction in a jet engine can cause contaminated air to reach the passenger cabin. It is a rare occurrence, but it does happen.

One of the most famous cases was British Midland Flight 92 on Jan 8th 1989 in Kegworth England.

"After taking off from Heathrow at 7:52 p.m., Flight BD 092 was climbing through 28,300 feet to reach its cruising altitude of 35,000 feet when a blade detached from the fan of the port (left) CFM International CFM56 engine. While the pilots did not know the source of the problem, a pounding noise was suddenly heard, accompanied by severe vibrations. In addition, smoke poured into the cabin through the ventilation system and a burning smell entered the plane".

In addition to contamination from engine failures, there is a much more public debate over contamination due to perceived weaknesses in the design of the aircraft cabin air systems. These weaknesses have not been positively identified but many believe it is due to faulty engine seals and/or air conditioning packs. There are numerous reports of pilots, flight attendants, and passengers feeling ill from "toxic air" on aircraft.

Jet engines on airliners take some relatively low pressure bleed air from the front stages of the compressor in order to feed compressed fresh air to the cabin and to power other items. This air is as fresh as the outdoor air.

Note that when a commercial airline starts engines on the ground at an airport with a significant tailwind then the engine can ingest some of its own exhaust and therefore upon occasion as a passenger you can smell the odor of kerosene.

If an engine is shut down in the air for some reason then no pressure is generated and other engines on the plane will supply the compressed air to the cabin.

Not the answer you're looking for? Browse other questions tagged airliner emergency or ask your own question.

8
Does the lead in fuel harm passengers?
5
Is it possible to take a liquid/gas inside aircraft cabin to contaminate the air?
4
What details do EICAS systems provide?
26
Is there any emergency situation in which jet engines would not be shut down before passenger evacuation of a transport aircraft?
4
Will portable Stratus ADS-B In receivers operate normally from the passenger cabin of a commercial airliner?
16
How fast does cabin air pressure leak after a total engine failure?
8
How is bleed air used to start a jet engine?
9
How much air is recirculated (vs. bleed air injected) in modern airliners cabin?
9
Is the bleed air passengers breathe tapped from the engines before or after it comes in contact with fuel? And why? Isn't this unhealthy?