Why are high-wing aircraft more stable?

This question is about high-wing stability, not about comparisons between low and high-wing design also in the question that talks about pros and cons of high and low-wing design, it doesn't really explain the stability from an aerodynamic point of view.

Below I sketched the major forces in a sideslip. Note that the aircraft has a sideways speed component which creates a side force on fuselage and tail (green) which needs to be counteracted by the sideways component of lift (blue).

Short Sandringham in sideslip (based on this source)

But still the weight (black) is attacking at the center of gravity, so it will not roll the aircraft, and the lift is in the vertical plane of symmetry, so it, too, will not create a rolling moment. Ergo, we have no stabilizing effect due to the high wing location!

In a sideslip of a high-wing aircraft the windward wing root will see a slightly increased angle of attack while the leeward wing root will experience a reduced angle of attack due to the crossflow around the fuselage. This would indeed create a rolling moment because it will shift the center of lift sideways, out of the plane of symmetry. In a static sideslip the pilot will deflect the ailerons to maintain the roll angle as well as the rudder to maintain the sideslip, shifting the lift vector back into the vertical plane of symmetry. Now any stabilizing effect of the lift asymmetry is on purpose cancelled by the pilot!

You will notice that the lateral aerodynamic force (green) acts above the center of gravity and also produces a correcting rolling moment. This is dictated by the location of the vertical tail, which contributes little to the location of the center of gravity, but produces a considerable share of the lateral force (reduced in the sideslip case by rudder deflection, however). This rolling moment, though, is almost independent of wing location. In a low wing, the center of gravity will be lower in total, especially when the engines are mounted on the wing, so the rolling moment contribution of the vertical tail is somewhat higher. The effect is small in a sideslip since the rudder deflection means that the fuselage contributes the majority of the side force. And this is not the pendulum effect which you asked about and which does not exist.

In airships, the pendulum effect is real, however: Since buoyancy always acts against gravity, a lateral offset of the heavy gondola will create an uprighting moment, just as it does in a pendulum. When turning, the heavy gondola will be pulled sideways by centrifugal forces, and the airship will roll. Since the turn is commanded with rudder, the rotation will give the rudder a small nose-down moment, which must be compensated by a nose-up elevator command. The pendulum effect will ensure that the gondola is at the lowest point in straight flight.

P.S.: Thanks to the hint of @kepler22b I have now discovered the keel effect page on Wikipedia. It also mentions the pendulum effect and calls both the fuselage contribution to the dihedral effect. Man, if there is ever a competition for the most misleading name of an effect, this would be the winning entry.

A pendulum is a mass mounted below the hinge point, so it will stabilize in the down position. A flying airplane is not hinged, so all motion is around the center of gravity. There simply is no pendulum effect in airplanes.

To have a simple sense about it, we can consider when an high wing aircraft is side slip to the right as shown in figure, there is a high pressure region near the fuselage below the right wing (windward wing, the direction from which the wind is coming) and a low pressure region on the other side. 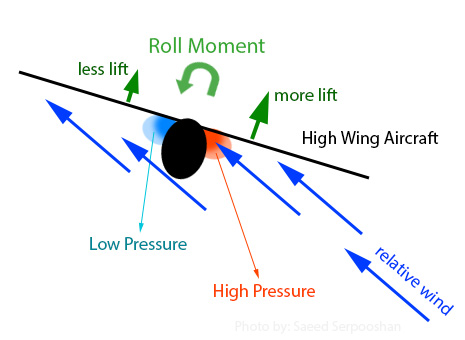 This will increase the lift of right wing and reduce lift of left wing, so a moment will be produced which tries to roll back the aircraft towards normal position.

Love the diagrams. Does a parachute have no pendulum stability either?

Try scratch building gliders. What you can learn from paper, glue, and balsa is amazing!

Yes, a high wing has pendulum stability, as do HANG GLIDERS! As a matter of fact, the hang glider adjusting to (pendulum) weight shift ELIMINATES the need for control surfaces!

Pendulum effect can not be described aerodynamicly because it is NOT an aerodynamic force! This is a hard learned lesson for people who try to "trim out" a CG that is too far back.

In scratch building gliders one learns at higher speeds, aerodynamic forces rule, but as one slows down, weight distribution factors in more and more. An aircraft, IN STRAIGHT AND LEVEL FLIGHT, the CG will always try to be directly under CL.

On the flying boat, breaking the lift components down to vertical and horizontal may help clarify the point. For "pendulum effect" to work, weight underneath the center of lift (such as landing gear) is displaced from being directly under the center of lift. As the plane rolls, the center of lift in relation to CG can change. Easier to see in a hang glider or airship, but still present in a high wing aircraft.

40
What are the pros and cons of high-wing compared to low-wing design?
55
What's the advantage of the F4U Corsair's gull wing design?
10
Has any aircraft ever been designed such that it could descend safely with no control input?
20
Why do blimps have fins?
15
Why do low wing aircraft have higher dihedral than high wing aircraft?
8
Does "pendulum effect" apply to hang gliders or any aircraft?
18
How does turning a small plane by opening the doors work?
6
Why does a Cessna 172 have dihedral wings if it has high wings?
7
Would a vertical stabilizer that extends both above and below the centerline be benefit or hindrance?
10
Is this paragraph about the dihedral effect in the FAA's Glider Flying Handbook correct?
See more linked questions

33
Why do we never see high-bypass turbofan engines sharing the same nacelle on large airliners and similar aircraft?
4
Why is the wing of large commercial jet aircraft usually located below the fuselage?
5
Which are some planes shaped like an inverted wing?
8
Does "pendulum effect" apply to hang gliders or any aircraft?
2
Is there any effect that contributes to roll stability even in the absence of sideslip?
2
How does the "pendulum effect" affect biplanes?
14
What are the pros and cons of wingtip tanks?
6
Why does a Cessna 172 have dihedral wings if it has high wings?
0
How can I calculate the tail area required to achieve longitudinal static stability?