What is a seal in aeronautics?

I've read phrases like "All gas turbine engines use pressurized seals for their shaft bearing compartments to keep [...]" but I do not understand what "seals" means. In spanish we haven't a word for it.

While the answer could stop here, we wouldn't know what seal types are used in turbine engines, and how some are pressurized to prevent contaminants entering the aircraft pressure vessel.

Need for bearing compartments and seals

I've read phrases like "All gas turbine engines use pressurized seals for their shaft bearing compartments..."

In turbine engines, there are one or more shafts holding the rotating parts of the compressors and turbines (rotors). Bearings are inserted between a shaft and its stationary supports to limit destructive and heat-generating friction. Bearings also bear the large axial load transferred by compressor and turbine rotors to the shafts.

In turbine engine bearings, solid friction is replaced by fluid friction using an oil film between balls or rollers and races. Bearings are enclosed in a cavity and oil is injected into the cavity. This cavity is known as a sump.

The following drawing is taken from an answer to In a turbofan what holds the spinning axis?. You can see the five bearings within their sumps: 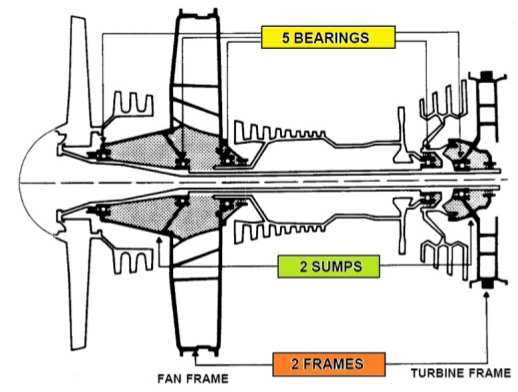 Oil must be circulated from the oil tank to the sumps and back, and cooled before being reused. As oil quantity is limited, oil must be prevented from leaving the oil system. This is where seals enter into action. In particular, seals are used to prevent leakage between a rotating shaft and stationary sump apertures.

Turbo engines' oil seals are specially selected to bear the high rotation speed of the shafts (wear), and the high operating temperature of the engine core (adjustment and bending). They are of two main types: Carbon or labyrinth. Both reduce oil pressure while it travels in the interstice between the shaft and the sump wall.

As one would think, these seals are not perfect: a small quantity of oil will be able to make its way across the seal, and this quantity will increase with seal wear. Unfortunately, burnt oil releases hazardous fumes which could enter the aircraft air conditioning system as cabin air is tapped most of the time into the engine compressor.

To limit the leakage further and to recover leaked oil, a second cavity is built around the first seal and pressurized air is injected into it. This has two effects:

For example, the forward sump (on the left of the first picture) encloses 3 bearings (from left to right: #1, #2 and #3). Oil must be contained within the sump near bearings #1 and #3. Let's look at a CFM56-7B engine mounted on Boeing 737 NG. This is the lower half of the forward sump:

CFM56-7B forward sump, based on drawing from CFM56-7B Familiarization Manual

Metal particles in scavenged oil are captured by magnets to detect abnormal wearing of bearings. From time to time oil is added to the oil tank to compensate for small leakages in the bearing sumps (and in the gearboxes).

"Seal" is used here to mean "closure". Specifically, a seal is a mechanism which prevents gases (or liquids) from crossing a barrier.

For instance, a rotating shaft must be connected to a fixed structure by means of a bearing (which allows it to rotate). If dirt or liquid were to enter the bearings, it would damage the mechanisms inside. Therefore, seals are used to keep dirt and liquids out of the bearings. Here is an example from general machinery: http://www.machinerylubrication.com/Read/838/protect-bearings 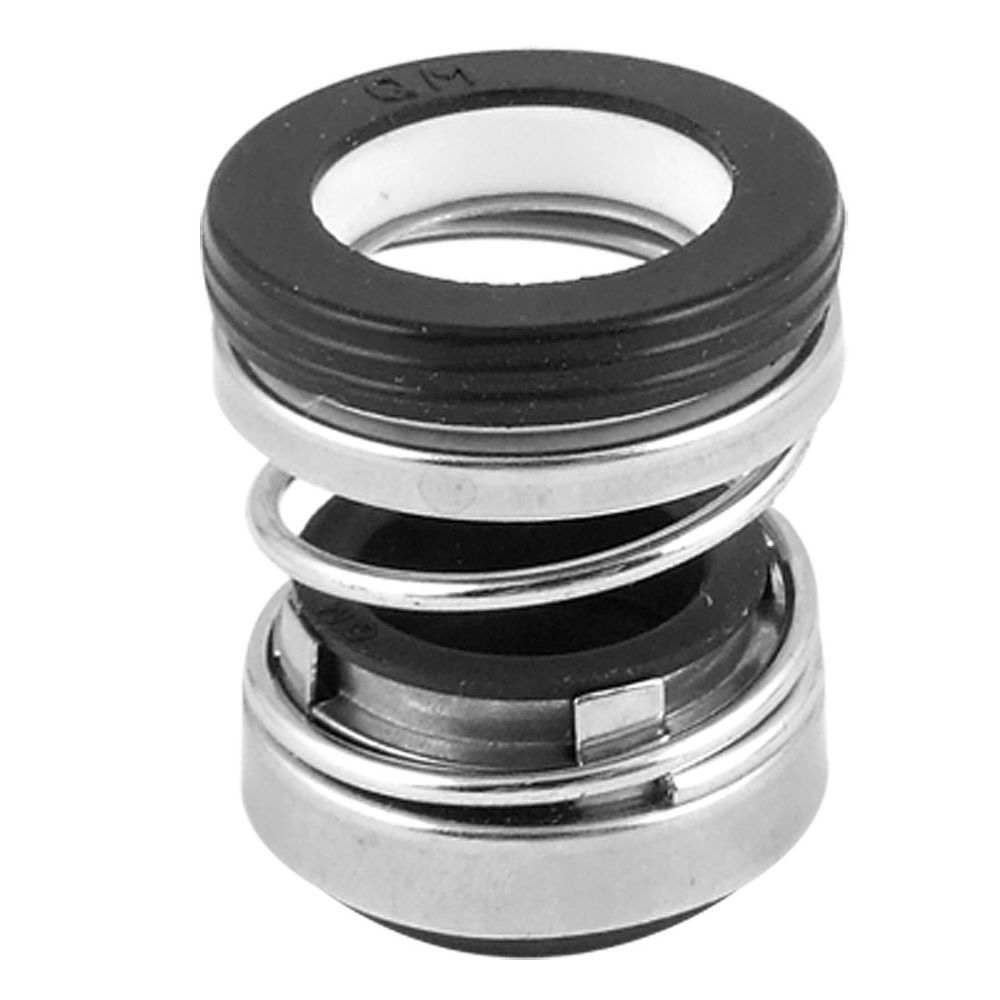 You can see one of these used in this assembly diagram (the "oil seal") to protect the ball bearing assembly: 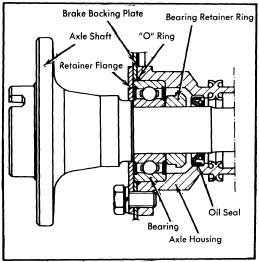 30
In a turbofan what holds the spinning axis?
4
How are compressor disks connected to the shaft?
3
What did a maintenance person put into the engines after landing?

5
Is this "bearing" sentence utterly incorrect?
3
What term is the EASA equivalent of the DER in the FAA safety assurance process?
5
What, exactly is "on the MEL"?
15
Are "Tally-ho" and "no joy" acceptable ATC terms for civil operations?
4
What is the difference between SUA and SAA?
10
What does the FAA mean by "Make and Model" of aircraft?
3
Is (L/D)max achieved at a specific speed or AOA?
1
Does it make sense to say an aircraft has an attitude of 3° or that it has a flight position of 3°?
0
Degree of motion terminology for special aviation movements
23
What do the 3-character aircraft type codes mean?