How can we recover from a tailplane stall?

I was studying for icing and a tailplane stall. I have looked up some internet pages and instrument flying handbook, and found the procedure below.

So now I'm trying to understand the reason why should a pilot do such actions. Can you help me out?

In most aircraft, the Centre of Gravity (cg) is somewhat forward of the wing or mainplane Centre of Pressure. The exact distance between the cg and the Centre of pressure will depend on aircraft loading, configuration, thrust setting and drag. However, cg forward of the Centre of Pressure produces a nose-down pitching moment. The horizontal stabilizer, or tailplane, then provides a downward force to overcome this normal, nose-down, pitching moment. The tailplane behaves as an ‘upside down’ wing and operates with negative Angle of Attack (AOA) as shown in Figure 1

Positive and Negative Angle of Attack

If the horizontal stabiliser becomes contaminated with ice, airflow separation from the surface can prevent it from providing sufficient downward force or negative lift to balance the aircraft and a nose-down pitch upset can occur.

Tailplane stall can occur at relatively high speeds, well above the normal 1G stall speed of the mainplane. Typically, tailplane stall induced by icing is most likely to occur near the flap limit speed when the flaps are extended to the landing position, especially when extension is combined with a nose down pitching manoeuvre, airspeed change, power change or flight through turbulence. Aircraft stall warning systems provide warnings based on an uncontaminated mainplane stall so during a tailplane stall induced upset there will be NO artificial stall warning indications, such as a stick shaker, warning horn or the mainplane or flap buffeting normally associated with a mainplane stall.

Effect of mainplane flap on downwash 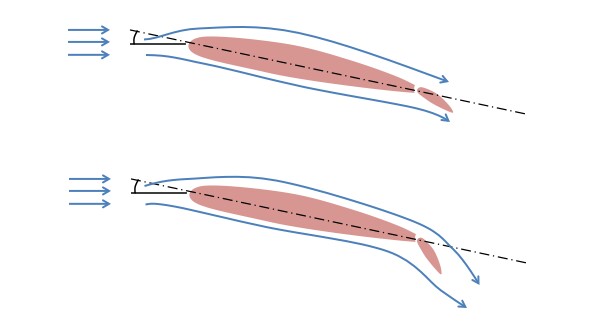 On aircraft with reversible (unpowered) elevator, tailplane airflow changes caused by ice accretion may lead to an aerodynamic overbalance driving the elevator trailing edge down and pitching the aircraft nose down. This can occur separately from or in combination with the nose down pitching moment caused by tailplane stall. The yoke may be snatched forward out of the pilot’s hands and the control force required for the pilot to return the elevator to neutral or to a nose-up deflection can be significant and potentially greater than the pilot can exert.

now match with your recovery actions

There was a NASA report on the NASA/FAA Tailplane Icing Program Overview, which covers the points raised by you. It lists certain actions that can be done to recover from a tail plane stall:

When the full tail stall was experienced during the power transition, the stall recovery procedure was:

• Reduce thrust (may be airplane specific)

• Pull back on yoke/ increase $\alpha$

The major lesson learned to recover from a tail stall was to undo what was just done to cause the event.

Pulling back on the yoke increased the camber of the tailplane, which provided enough tail download to counteract the nose-down pitching moment and increase the $\alpha_{tail}$

This sounds counterintutive as the conventional tail produces force in the direction opposite to the main wing. The report notes:

For those recommended actions to be effective, two preconditions have been quietly assumed:

Both can be assumed to be correct in almost any case. Now let’s look at the three recommendations in detail:

raise flaps to the previous setting.

Flaps increase camber and shift the center of pressure backwards. In order to balance the aircraft with the same center of gravity location, the tail needs to produce more downward force with lowered flaps. Retracting flaps will unload the horizontal tail and reduce the stall condition.

do not increase airspeed unless it is necessary to avoid a wing stall.

When the main wing has positive camber, a lower wing angle of attack shifts its center of pressure backwards. Therefore, the tail load and lift coefficient are lowest at low speed, and flying slowly will unload the tail. With rear center of gravity, tail load normally can even become slightly positive at low speed.

So in all cases the recommendations help to unload the tail and reduce the condition that let the iced tail stall.

I have a theory on applying the backstick on a tail stall induced while lowering the flaps. OP’s comment:

apply nose up elevator pressure (I don't get it. The nose up pressure will make the elevator to go up and wouldn't this increase the negative angle of attack and worsen the stall?)

If the tail stalls, then the nose pitches forward. The center of rotation is about somewhere near the wing and CG, well forward of the tail. So the tail instantly sees a step increase in AOA, to well beyond the stall AOA. Probably really high AOA. The aircraft develops inertia in pitch too.

At this point, you are doing triage while you lower the flaps and undo what you did. While you’re not getting much lift (downward) from the tail, it is resisting the forward pitch with drag. Letting the stick or yoke come forward would dump this pitch resisting force, and the aircraft would go right over its nose before the flaps could raise.

13
Does static longitudinal stability require download on the tail?
6
Why can't planes use only flaps in the tail section instead of stabilizers?
3
Is it correct to say "the up-elevator position decreases the camber of the elevator"?

11
Is the stall speed different at -1G?
17
Does stall angle of attack in inverted flight change due to the camber of an asymmetric airfoil?
5
When approaching stall, why does the center of pressure move back?
4
Why does Airbus suppress stall warnings in certain situations?
5
Definition of a Deep Stall
14
Why does a stall decrease lift, rather than increasing it?
1
Mechanical vs Pneumatic Stall Warning Systems
1
How do aircraft stall warning systems handle (or not) asymmetric-stall situations?
15
Why do passenger jet manufacturers design their planes with stall prevention systems?
19
Why does my wind tunnel experiment give two different stall angles of attack?