How can I properly model paper airplane physics? [closed]

Anyone have any experience with this? In my game now, it just follows the usual motion for an object in a vacuum, which makes for some flight, but it doesn't feel perfect, and traveling at a slight downward angle makes you lose speed, which isn't right.

I am asking do paper air planes have a maximum velocity brought on by its paper design even if control and thrust was possible maybe using composite cardboard material?

I would model the energy flows between kinetic and potential energy. Start with a full bucket of potential energy plus the appropriate speed and drain kinetic energy away over time depending on flight speed.

To know how much energy is lost to drag, you need to model the drag using two components:

If your drag is the sum of both, its minimum will be at some moderate speed. I plotted the drag components for a glider below, but since the physics are the same for a paper airplane, this plot should do for now. 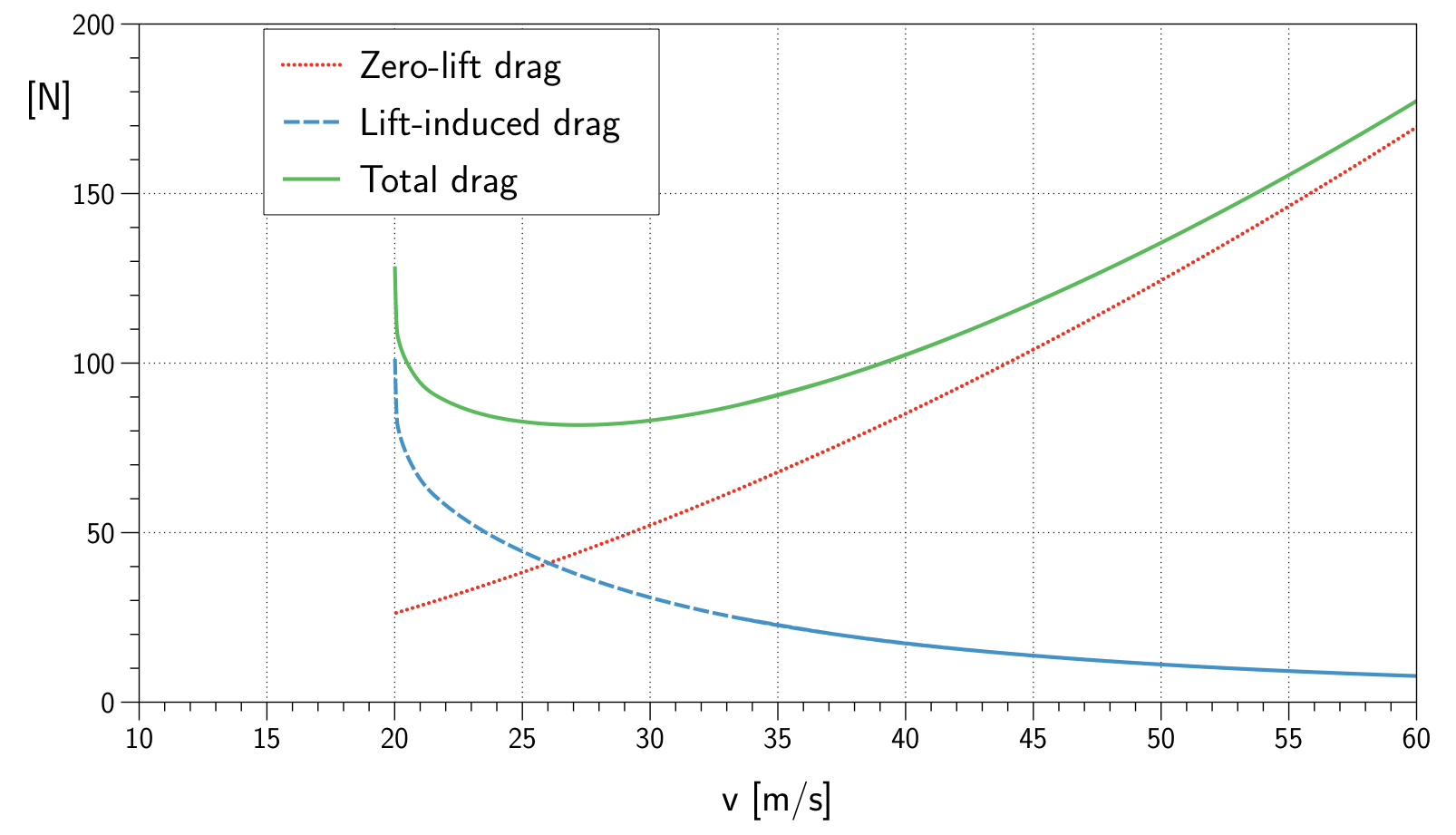 The nonlinear behavior of the induced drag curve at low speed is due to flow separation, and something very similar will happen for a paper airplane. The important thing is: The drag curve has a minimum.

For picking a realistic drag it helps to rephrase the equation above by introducing lift $L = m\cdot g\cdot n_z$. $n_z$ is the load factor and is approximately one in straight flight. The ratio between lift and drag for a paper airplane is somewhere between 4 and 10 - just pick a number which results in a realistic simulation. To calculate the sink speed $v_z$ as a function of flight speed $v$ use this formula: $$v_z = \frac{c_{D0}\cdot S\cdot v^3\cdot\rho}{m\cdot g\cdot 2} + \frac{m\cdot g\cdot 2}{v\cdot\pi\cdot b^2\cdot\rho}$$ S is the wing area of the paper airplane and $b$ its wing span. $\rho$ is air density, and for the zero-lift drag coefficient $c_{D0}$ you should pick a number which makes the paper airplane look realistic. Start maybe with 0.05.

25
How do insects decrease aircraft performance?
13
How are the glide polar and L/D ratio charts related?
12
How is the induced drag calculated for a wing with elliptical planform?
6
What happens during a powered descent?

31
Is it possible to build a paper airplane that will enter a fully developed spin?
28
How do paper airplanes create lift if their wings are flat?
15
How does a ring paper airplane fly for a long distance?
10
Can I model propellers used in electric aircraft the same way as I model RC quadcopter drones?
2
How do 3d panel methods model wake-surface interaction?
2
Where can I find blueprints for the Wright Model HS?
1
How did the Brazilian Civil Aviation Authority have MCAS on paper from Jan 2018?