How did the AAIB assist in locating MH370?

I saw on news that the AAIB helped to locate the missing MH370 flight, saying that it ended up in Indian Ocean, with the help of a whole new technology.

I was wondering what kind of "new technology" it was?

The following statement has just been released today by the Prime Minister of Malaysia, in relation to the AAIB:

This evening I was briefed by representatives from the UK Air Accidents Investigation Branch (AAIB). They informed me that Inmarsat, the UK company that provided the satellite data which indicated the northern and southern corridors, has been performing further calculations on the data. Using a type of analysis never before used in an investigation of this sort, they have been able to shed more light on MH370's flight path.

Based on their new analysis, Inmarsat and the AAIB have concluded that MH370 flew along the southern corridor, and that its last position was in the middle of the Indian Ocean, west of Perth.

This is a remote location, far from any possible landing sites. It is therefore with deep sadness and regret that I must inform you that, according to this new data, flight MH370 ended in the southern Indian Ocean.

We will be holding a press conference tomorrow with further details. In the meantime, we wanted to inform you of this new development at the earliest opportunity. We share this information out of a commitment to openness and respect for the families, two principles which have guided this investigation.

Malaysia Airlines have already spoken to the families of the passengers and crew to inform them of this development. For them, the past few weeks have been heartbreaking; I know this news must be harder still. I urge the media to respect their privacy, and to allow them the space they need at this difficult time.

It's not a "new technology" per se, but a new form of analysis. You might have heard recently that the aircraft responded to hourly "pings" from a satellite:

British satellite company Inmarsat immediately began doing calculations based on a series of hourly "pings," as the plane and one of the company's satellites tried to communicate with each other.

Triangulating those pings seems to have given Inmarsat a pretty good idea of where the plane went, along one of two routes, to the north and to the south. 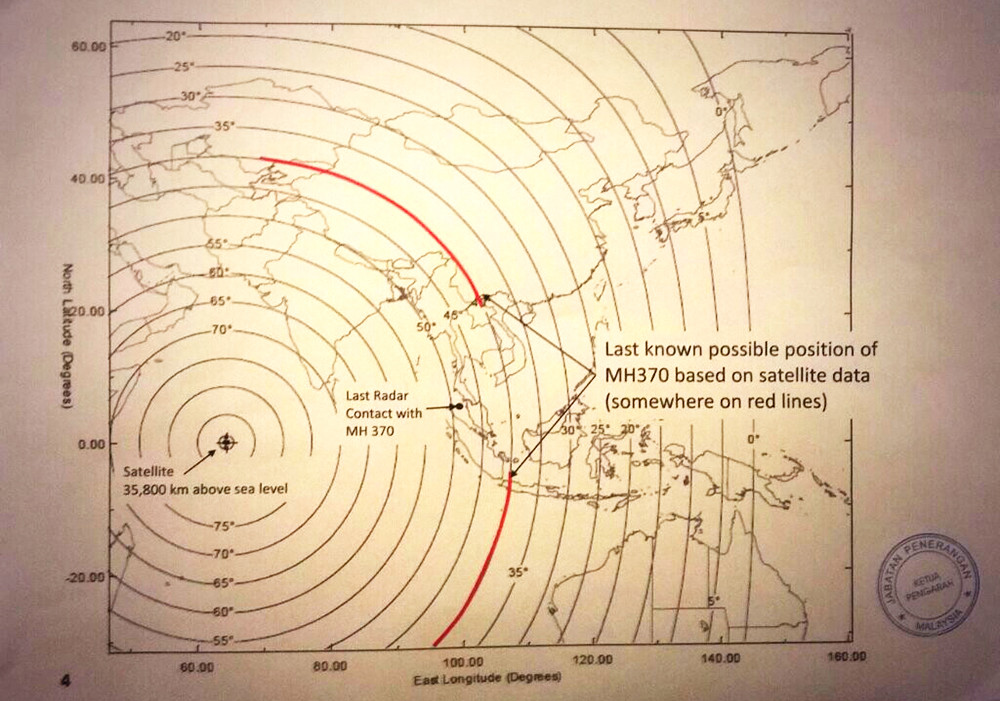 Here is some further information:

About three hours after Flight MH370 went missing, Inmarsat, a British-based satellite company, began tracking the Boeing 777 through an on-board data system called Aero Classic. Every hour, Inmarsat's satellites would try to communicate with the aircraft, pinging it with a computerized question asking, in effect, "Are you there?"

For several hours, Flight MH370 responded "Yes, I am," notifying engineers on the ground with a so-called handshake that the plane was still powered up.

Using that series of pings, Inmarsat engineers and other analysts were able to piece together two broad, arcing regions where the plane could have been located when it last communicated with the satellite.

"Our engineers looked at the time between the handshakes, and they realized that the object wasn't stationary under a satellite but moving away from it," Christopher McLaughlin, senior vice president of Inmarsat, said Thursday. "Over time, the engineers here recognized that there were a number of data points and that it had flown for several hours. We didn’t know if it was on the northern or southern corridor."

More information on how Inmarsat determined MH370 flew along the Southern corridor specifically, will likely be released tomorrow at the press conference (as mentioned in Najib Razak's statement), which I gather is the information you're looking for.

Like most geostationary satellites, Inmarsat 3-F1 is not in a truly fixed orbit relative to the earth: it drifts a few degrees north and south. Knowing this, and more importantly the speed it is drifting north or south, lets them refine their already very good doppler measurements - if you assume the northern path, you have to assume MH370 had constantly varying airspeed - if you assume the southern route, the airspeed comes out constant.

Apparently the satellite is not exactly geostationary but describes a small 8 figure over a roughly 24 hour cycle, and it is known which direction it is moving towards at any given time. I think it is in fact the Doppler effect of the combined satellite+plane movement which allowed them to distinguish between the north and the south paths. So, for instance, if the satellite was moving north at a given time one would expect an increased red shift if the plane was flying south and a reduced one if flying north.

CNN replay of the analysis showed that the south route had the plane approaching the satellite like a train approaching an observer then moving away from the satellite for the rest of that route. The doppler shift therefore resulted in a higher frequency initially then a lower frequency as the plane traveled south. If the plane had went north the doppler shift would only cause the frequency to get lower and lower much like the sound of a train traveling only away from an observer.

I assume they could also take into account the slight figure 8 that the satellite takes from the 64.5 degree nominal position.

Also they indicated they calibrated the data to known past flights by 777's going south vs north.

From what I can deduce they compared the redshift of the pings to other aircraft flying the proposed routes and were able to eliminate the north hypothesis.

The plane wasn't flying along that arc. At the moment in time that the ping was evaluated, the plane had to be somewhere on that arc. They never said it maintained an equidistance from the satellite. That would be bizarre.

Not the answer you're looking for? Browse other questions tagged accidents uk mh370-incident aaib or ask your own question.

38
How can a computer model yield two possible flight paths of MH370 in South Indian Ocean?
3
Would better location tracking for airliners improve safety?
15
How can investigators tell the difference between impact damage and explosion damage when investigating debris from a crash?
7
How unusual were MH370's final ATC exchanges?
1
What is the problem in the satellite data of MH370