What is my BHP if I open full throttle and how is it controlled?

aircraft-performance piston-engine cessna-152
Share
Improve this question
edited May 15 '16 at 20:56

Now to understand how mixture affects the power produced by the engine you need to understand that the mixture knob controls how much fuel enters the cylinders to be burned with the air. As a combustion engine sparks, the fuel ignites but there is the fire triangle, Air, Fuel, Heat. Too much or too little of any of those pieces means a reduction of power or no power at all.

No, depending on the fuel type there is an optimum stoichiometric ratio where the proper amount of air and fuel are burned such that there is no extra air or fuel left over. For gasoline engines this is about 15:1, so for every 15 units of air, 1 unit of fuel is required. Having a richer fuel mixture results in an incomplete burn and may cool the cylinder temperatures, reducing power.

On the flip side, having too little fuel for the air can cause hotter cylinder temperatures and hot-spots on the cylinders. This causes detonation or knocking and can damage an engine very quickly. This is especially apparent in engines that have a lot of cylinder carbon deposits where the carbon can heat up and detonate the mixture before the spark plug does. Its like hitting the piston with a sledge hammer as its still coming up.

I don't have a graph from an O-235L but I did find one from an O-235C, which shows the relationship between throttle and BHP: 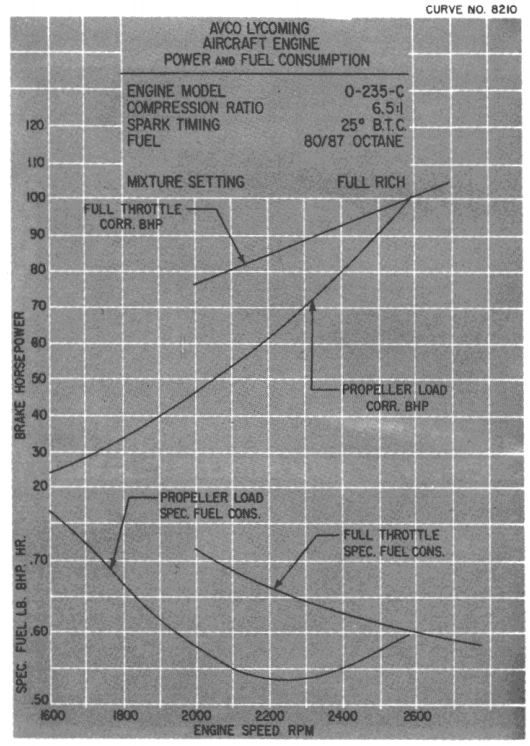 So you can see that reducing power from 2500 RPM to 2400 RPM gives a 10% decrease in BHP produced by the engine. Running at 2350 RPM is a 75% power setting (and in this graph nicely matches up with ~75 BHP). You can also see that there is a sweet-spot with relation to fuel consumption and produced power right around the 75% mark, which is usually refered to as the "performance cruise" value (best speed for fuel), and at 65% for "economy cruise" (best fuel).

So its important to remember that the power produced by the engine is not a straight linear calculation. When you did your comment:

You assumed that the engine can produce power at 10RPM, which just isn't true. Lets take a better example and say that at 1600 RPM it is producing 25HP and at 2600 it produces 100HP, we can do the math then.

Not the answer you're looking for? Browse other questions tagged aircraft-performance piston-engine cessna-152 or ask your own question.

1
Why is there no 100% power in the POH power setting table?

10
Why is full carb heat recommended when reducing power below normal setting?
11
Why is the initial short-field climb below Vₓ in a Cessna 172?
16
Why is the magneto drop check done at 1700 RPM?
23
Why do piston engines in aircraft burn fuel at a higher rate than a comparable car engine?
6
How do different RPM–MAP settings affect range?
5
Is this test question correct about the causes of detonation?
1
How to lean with constant speed prop on multi-engine aircraft without EGT
3
Why is carburetor heat unnecessary at full throttle?
33
Starting on the left magneto only - why?