What is the difference between a barrel roll and an aileron roll?

I was going through social media and I came across this GIF image that showed a plane doing some sort of roll.

It was labeled "Barrel Roll" but in the comments to the post, someone said that it was an "Aileron Roll". What is the difference between a barrel roll and an aileron roll?

The difference can be appreciated in this image: 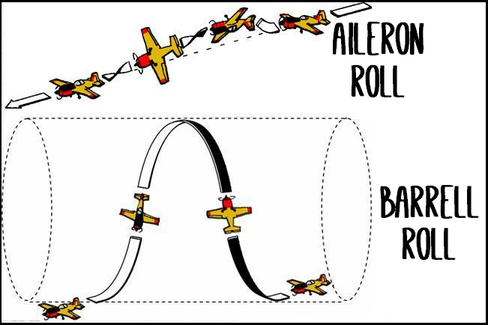 Image Source You can find out about the difference in feeling that these two manoeuvres have.

Having stated these things, the manoeuvre shown in the GIF is certainly an aileron roll.

A barrel roll, image from flightsimbooks.com

If properly executed, there is no change in alttitude in case of an aileron roll, while during barrel roll, the aircraft follows a helical path.

An aileron roll, image from globalsecurity.org

There is no precise, universally accepted definition of "aileron roll". If the rotation were purely about the aircraft's longitudinal axis, then any positive angle-of-attack existing at the start of the maneuver would be converted to pure sideslip after 90 degrees of roll, and to a negative angle-of-attack after 180 degrees of roll, at least in the simple case where the wings are attached to the fuselage at zero incidence as measured relative to the longitudinal axis. Such a roll could be done with the aircraft following a nearly linear trajectory. Yet an "aileron roll" is usually described as a maneuver than can be carried out with light positive G all the way around, and no sideslip. This must involve somewhat of an arcing trajectory if the aircraft is to finish the maneuver at the same altitude it starts at, although the arc may be hard to detect in the case of a fast jet.

In short, it is not universally agreed-upon whether the term "aileron roll" should be applied to a maneuver that involves positive G, or negative G, at the point where the aircraft is inverted. The positive-G concept is the more common one.

Still, the most common conception of an aileron roll involves rotation that is MOSTLY around the aircraft's longitudinal axis and involves relatively little change in heading or pitch attitude, while a barrel roll is usually described as a maneuver involving a great deal of heading change, often 90 degrees or nearly so, as well as a great deal of change in pitch attitude.

All things considered, it's complicated. Is the aircraft rolling around its longitudinal axis, or the airspeed vector, or neither? Is the orientation of the aircraft's longitudinal axis staying fixed in space, or is the orientation of the airspeed vector staying fixed in space, or neither? Is flight path linear or arcing? If we had an "x-wing" plane with a set of vertical wings as well as horizontal wings, all with symmetrical airfoils and zero incidence, then starting from an initial slightly nose- high attitude, we could roll around the aircraft's longitudinal axis all day long with very little disturbance to the flight path. We wouldn't be able to pour water into a cup on top of the dash though. Would this be an "aileron roll"? It's hard to argue that it wouldn't be, but it's not what we usually envision when we speak of an "aileron roll".

Not the answer you're looking for? Browse other questions tagged aerobatics maneuver or ask your own question.

3
What is the name of the figure consisting of a slow revolution around longitudinal axis?
11
What is the concept behind being able to continuously pour iced tea while rolling an airplane?
0
If pilot use rudder to roll the aircraft at high AOA in the F4 Phantom then one aileron from one wing and one spoiler from other will be deflected?