Is is possible to land a midsize commercial plane on an Ford Class aircraft carrier?

I'm story-boarding a novel. I'm toying with the idea of contriving a situation in which a midsize commercial aircraft is forced to make an emergency landing on an aircraft carrier. I read here that the largest plane to land on an aircraft carrier is a C130 Hercules, which it did as a series of tests. Its maximum weight when performing these tests was 121,000 lbs. At this weight, it required only 460 feet to land. And it did so without use of a tailhook, or any other arresting mechanism. The brand new Gerald R. Ford class carrier is 1,106 feet long. The landing strip on the carrier is somewhat shorter. I couldn't find numbers on this, but from photos, I would estimate that the landing strip is a little more than 800 feet long. Which leads me to my first question:

In an emergency situation, could an aircraft use the full length of the aircraft carrier's deck to land?

By safely, I mean without any passenger death. I expect that any such landing attempt would result in significant damage to the aircraft and the carrier. On one hand, the numbers seem to suggest that if a C130 can do it, so could a B737. On the other hand, I would expect that the C130, as a military aircraft, is more robust than a commercial aircraft, and perhaps able to better meet the conditions required to land on a carrier.

Also, I realize that in an emergency situation it may be safer for the aircraft to make a water landing near the carrier, and then for the passengers to evacuate onto inflatable rafts, finally to be brought aboard shortly thereafter. I will have to invent a situation which requires the plane to land on the carrier.

With a stiff breeze, say 20 knots, plus the carrier at max speed, you have maybe 50 knots of headwind. With that sort of headwind, can you stop a mid- to light-weight 737 in 1000' using full flaps, max reverse, and max brakes?

I don't have the charts with me, but I suspect you totally could, and in fact it wouldn't even be all that close. No margin for error if equipment fails, but if everything works right, those jets can stop quite well. And 50 knots on the beak is a LOT of headwind... "groundspeed" over the deck would be like 60 or 70 knots, and you can lose that in a lot less than 1000'.

Not so sure. Compared to carrier aircraft, the 737 wingspan in WIDE -- even for the "little" -500. That limits where you can plan your rollout so that you don't have an unacceptably high risk of clipping the island. Without playing with scale drawings of a 737 and the Ford's deck, I couldn't even guess if or how the geometry would or wouldn't work out.

Alternate plan that is probably no more risky for the passengers and might be a LOT safer for the carrier: ditch your (nearly out of fuel) jet close to the carrier, and have the carrier's helos and the small boats of the battle group pull the survivors off the wings or out of the water. With calm water, you get a "Sully" scenario (except with wings filled mostly with air, rather than jet fuel... Better buoyancy). In rough water, the risks go up. Way up.

But in that sort of weather, the deck landing gets lots more risky as well.

I suspect the deck landing would neither be allowed nor requested, but not for reasons of stopping performance.

Without modification of b737, it is not likely for a b737 to land on a Ford class carrier. 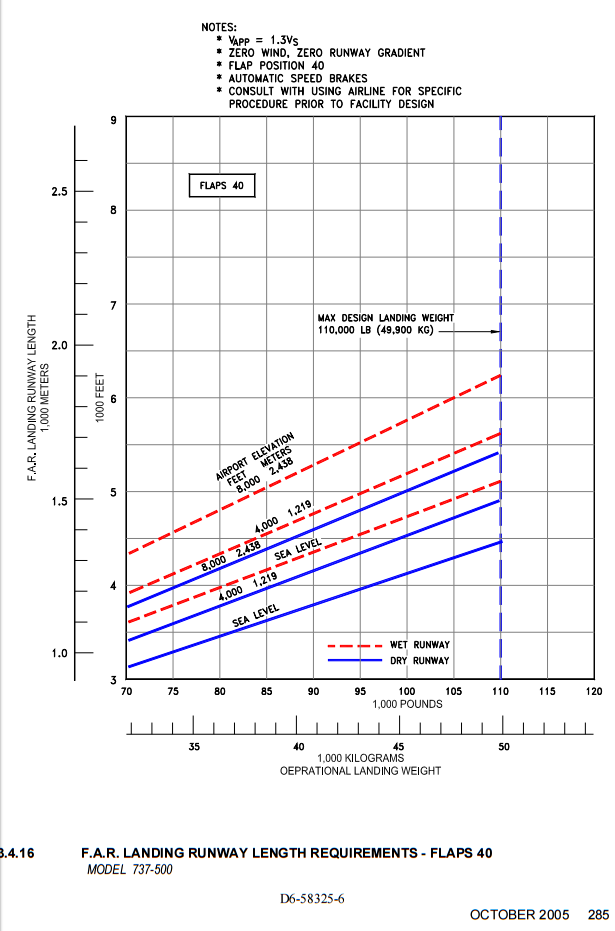 On the other hand, Boeing had proposal to develop T-43 Carrier Onboard Delivery. If Boeing won the USN contract, we may see B737-200 landing on aircraft carrier.

More details can be seen here. 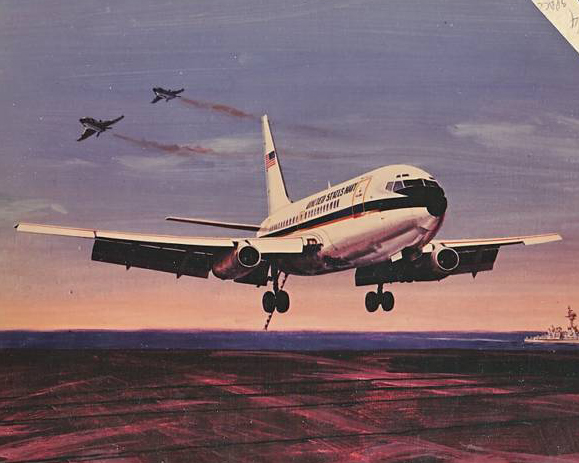 In addition to the other posts: it depends on how much notice the carrier has. The C-130 landed on an empty deck; during normal operations the edge of the flight deck is lined with aircraft.

This goes double if you decide to use the full deck length instead of just the landing area. The bow area is often used for parking.

So in order to land a 737, you need to launch pretty much every aircraft that's currently on deck (which can be ~50 depending on what the carrier is doing at the moment).

Launching 50 aircraft takes a while: a carrier can launch 4 planes/minute maximum, and that's if everything has been lined up just so beforehand, every aircraft already has fuel and crew on board, etc..

The simple answer is no. Although the C-130 was successful in the carrier landing, the C-130 is an extreme STOL aircraft (Short Takeoff and Landing) design. Meaning it is designed to land in an extremely short distance. We currently do not have any commercial airliners that match this performance parameters. The question of using an arresting array of cables as an emergency procedure would not be a great idea as the commercial aircraft would probable be too heavy and not properly reinforced in critical areas for a successful deceleration.

19
In case of emergency, is it possible (doable) to land a small propeller-driven aircraft on an aircraft carrier?
26
Why is landing on a carrier not handled by a computer?
14
What would happen if a pilot were to use the parking brakes after touchdown in order to slow down?
9
Is there a procedure for landing on an aircraft carrier when the tailhook fails to deploy?
15
What happens if an aircraft declares an emergency while there is another aircraft ahead cleared to land?
10
With helicopters, is normal landing or auto-rotation landing any different when landing on water?
2
In the old days, why didn't aircraft use simpler systems to land on a Carrier?
8
Why are emergency water landings the majority of the pre-flight safety briefing if they're so rare?
5
Straight vs. angled aircraft carrier decks: tradeoffs for rolling takeoff?
8
Can an F-16 land on an aircraft carrier, at all?