How do you know if a VOR is High, Low, or Terminal?

Is there any way of telling on both a VFR and IFR chart what type of VOR we are looking at?

Service volume for each class:

Edit I found an example: 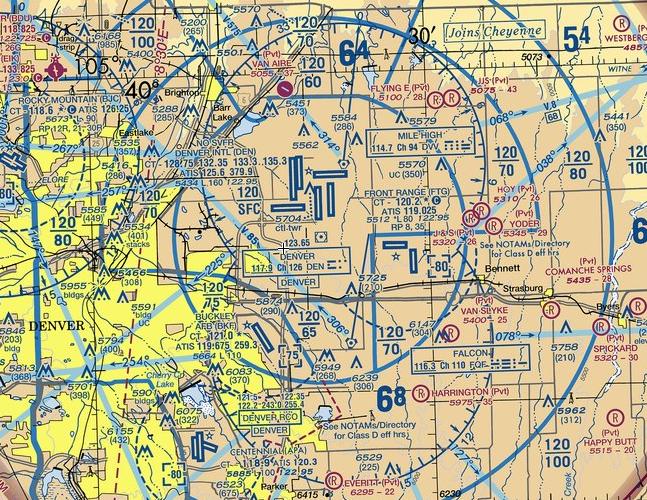 The DEN VOR has no compass rose, so its either a terminal VOR or they omitted the compass rose for clarity. There are two other VOR's in close proximity, MILE HIGH on the North East side of the field and Falcon to the east of Buckley AFB. According to AirNav NavAid Info its a high VOR.

As far as high/low VOR, one way to tell is to look at the High/Low enroute IFR charts.

For example, here is a portion of a low-enroute IFR chart:

You can see two VOR stations on here labeled Minot Intl and Devils Lake Rgnl with a victor airway between them (V430).

Here is the same area from the high enroute IFR chart:

You can see that the VOR symbol around Devils Lake Rgnl has disappeared and (although its difficult to see) the VOR symbol has also disappeared. NavAid Website lists DVL (Devils Lake) as a LOW VOR and also lists MOT (Minot International) as a HIGH VOR.

There is no differentiation between the VOR high/low symbols on a VFR chart because low altitude VOR's can serve aircraft up to 18,000 feet where you would need to file an IFR flight plan anyway, so all VOR's regardless of high/low are available to VFR flights.

Putting it another (technical) way is that high/low VOR's have the same service volume for VFR and low-enroute IFR flights, so they do not need to be distinguished on VFR or low-enroute IFR charts.

From the chart you can understand what type of VOR is that But there are also other ways . By checking the frequency band you can also understand the type of that VOR. There are basically two types of them and they are Terminal VOR(TVOR) and Airway VOR. The whole VOR frequency range is VHF-108 to 117.95MHz. ILS frequency shares some portion of the TVOR. The terminal VOR are mainly of low and the airway VOR are mainly of high type.

Not the answer you're looking for? Browse other questions tagged aeronautical-charts navaids or ask your own question.

9
When is a VOR shown on maps?

7
What do these polygons mean on VFR charts?
8
Why are there some airports not charted as service-available when FBO provides fuel?
9
What is “abnd” on the U.S. VFR Sectional Chart?
1
Re old (1992) US VFR sectional charts— when was the thin dashed magenta line first used?
10
What is the purpose of this interesting pattern of class E airspace in northwest Alaska?
2
What official government document should a pilot check to determine what magnetic north a VOR was set to when it was commissioned?
8
Can you change airways when they cross without a named fix?
5
Why do IFR charts show TACAN paired frequencies when there is no collocated VOR?