Is it possible to detect a pitot static failure (blockage) of air data probe during flight and alert the pilot?

Loss of static and pitot tubes affect the display of airspeed, altitude, vertical speed information. Loss of this information can be catastrophic for flight. How are the pilots communicated about the failure of these ports (ex: when they get blocked). Or is there a system in place already that detects the blockage and unblocks it. Even if such system exists, what is done to ensure that pilot does not trust the airdata information displayed during the time when the ports are blocked?

The crew checks the pitots and static ports before the flight to ensure they are in good condition and not blocked by objects or insects. Pitot tube (pitot-static) can be obstructed in-flight. Static ports are less affected.

Detecting a blocked pitot or static port: This is not done, but is possible (e.g. send some air from the back of the tube in a pitot, and see if it can exit the tube at a normal rate (which is dependent on several parameters).

Unblock a blocked pitot: In some cases yes:

Redundancy for pitots: Yes, two or three exist on most airliners.

Alert for blocked pitot: Not a direct alert, since a blocked pitot is not detected, but air data processors compare the different pressure values received from the different pitots, and in case of significant difference alert the crew and disconnect the automated units relying on pitot pressure (like the autopilot).

A message is displayed to emphasize that airspeed is unreliable

Dangerous? Yes because if the unreliability of airspeed is not taken into account by the pilot, then stress and inappropriate actions can occur because the aircraft is apparently not reacting to attitude changes.

AF447 disaster is sadly a perfect demonstration of the stress that can be generated.

If the crew detects correctly the situation, then there is nothing special to do, they just need to continue (manual control) at the same altitude and with the same aircraft attitude until the speed becomes reliable again.

Loss of this information can be catastrophic for flight.

It is certainly a risk factor, but pilots have to do many mistakes before it really becomes catastrophic. There are procedures to get the plane safely to the ground even without that information.

How are the pilots communicated about the failure of these ports (ex: when they get blocked).

In smaller aircraft that don't have redundant pitot-static systems (light singles usually don't) and in older aircraft without flight computer it is up to the pilot(s) to spot the problem.

Or is there a system in place already that detects the blockage and unblocks it.

It is not possible to detect the blockage. The only unblocking mechanism is anti-ice, which simply heats the pitot tube to prevent ice buildup.

Even if such system exists, what is done to ensure that pilot does not trust the airdata information displayed during the time when the ports are blocked?

Nothing. Even if the system does detect a fault by comparing the values from the separate system, it does not know which of the systems is wrong. The pilots must decide themselves by combining other information they have and their understanding of physics of flight. They have pitch-power tables and other procedures to diagnose the problem. 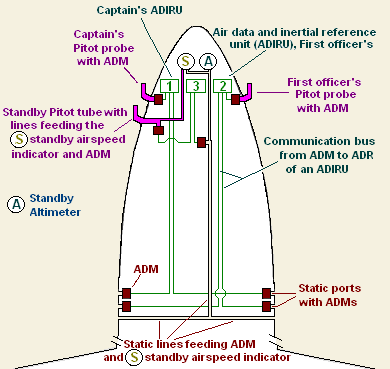 In this case the system can reject the bad reading (caused by a blockage or bad probe etc.) by using the data from the 2 other sensors. The basic logic is that if all 3 probes are in agreement (same reading) they are all working. If at any given time one of the probes readings differs from two of the others then the reading is rejected. Of course this does open you up to the issue where two of the 3 probes fail and only a single probe is correct. However the chances of two probes failing and giving the same incorrect reading is low.

In modern planes things like GPS and INS units can be used to cross check the system but it will not necessarily be connected to all the same systems.

I don't know of any system that unblocks a pitot tube if a physical blockage is present, but if this is in reference to Air France 447, modern airplanes have a heater that can be applied to pitot tubes to de-ice them.

In general, unless there is a system in place to specifically detect this, pitot blockages are generally detected through erroneous readings on the instruments. The good news is that most large jets have dual pitot static systems, one for the pilot’s displays and the other for the first officer’s. Blocked pitot tubes can generally be spotted with unresponsiveness of the airspeed indicators or display tapes to throttle inputs while holding a level attitude or slower than normal displayed airspeeds at lower altitudes and faster than normal displayed airspeeds at altitudes higher than where the pitot tube became clogged. A little experimentation and cross checking between the Captain’s and FO’s gauges can quickly determine the faulty system.

I am working with a leading sensor manufacturer to introduce a system we call 'pitot guardian' using proprietary hardware and software we can detect blockages and alert accordingly in order to ease the burden on the flight crew. The method we use does not interfere with existing systems and can detect problems before start up as well as in flight, preventing aborted take off roll if, at 'air speed active' the cross check shows an anomaly, and giving flight crews more time to make the correct decisions should icing overcome ports at altitude.

3
What is the standard procedure in case of inconsistent sensor readings?
3
Do any aircraft automatically test that the pitot-static system is functioning properly before liftoff?

8
What steps have been taken to rule out instrument failure due to blocked static ports or pitot tubes?
10
What is the difference between a pitot tube and a pitot-static tube?
2
Are there typical values of pitot-static and TAT probe measurement uncertainties?
8
How does an air-data computer convert ram air pressure from the pitot tube into airspeed?
1
How does a G1000 equipped with a GDC 74 calculate IAS from dynamic pressure?