How does yaw relate to pitch?

I have been confused about the relation of yaw and pitch in propeller powered aircraft. When such an aircraft is pitching up, will it yaw to the left or right? Conversely, when it's pitching down, which way will it yaw?

When I try this out on X-plane, the plane turns left when I take off. However, some online material insists that the plane will yaw to the right when I am pitching up. This is confusing me. What's the best explanation for this?

How does yaw relate to pitch?

There are four forces at play on a single engine aircraft that can cause turning tenancies or Yaw.

The main reason a single-engine propeller aircraft yaws left at T/O is due to Asymmetrical Thrust (P-Factor). At high angles of attack the right side of the propeller disc creates more thrust than the left side and this causes Yaw to the left.

Gyroscopic Precession causes a yaw to the right when an aircraft is suddenly pitched up(tail is lowered or nose is raised) and a yaw to the left when an aircraft is suddenly pitched down. (tail is raised or nose is lowered). This force is only apparent while the aircraft's Pitch is changing, once the pitching action is stopped, the force is gone. (not present in a steady nose up climb)

Slipstream effect causes a slight yaw to the left, and slight roll to the right.

Engine torque causes a roll to the left.

A more detailed explanation can be found here: Turning Tendencies 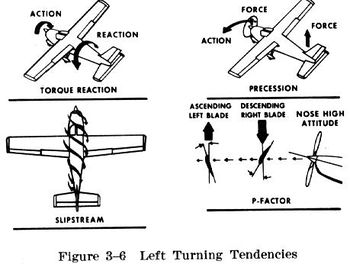 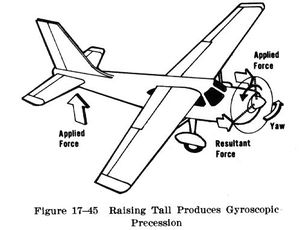 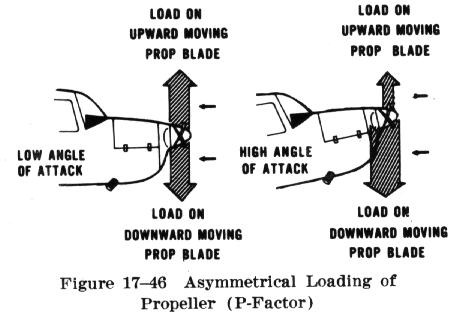 From personal experience when pitching up on climb out after take off, I have to apply right rudder because the aircraft wants to yaw left. I've been told its because of engine torque at high power and slow speed.

Not the answer you're looking for? Browse other questions tagged pitch or ask your own question.

13
Why does an aircraft pitch up when the speed increases?
8
What is the aerodynamic centre and how does it relate to the pitching moment?
7
What is the name for yaw, pitch and roll together?
7
How does having a bigger engine placed slightly more forward and higher impact the plane in pitch?
14
What are the exact meanings of roll, pitch and yaw?
14
Why does spoiler extension cause straight-wing Learjets to pitch down, rather than up, and why did it take so long to discover this?
2
What is the relation between velocity and rate of pitch?
2
How can I calculate the relationship between propeller pitch and thrust?
0
How do fighter jets stop pitching motion after a elevator deflection?
2
How does pitch relate to glide angle?