Why is a strake placed on the fuselage in front of the tailplane on the Hawk aircraft?

Why is a strake placed on the fuselage in front of the tailplane on the Hawk aircraft? 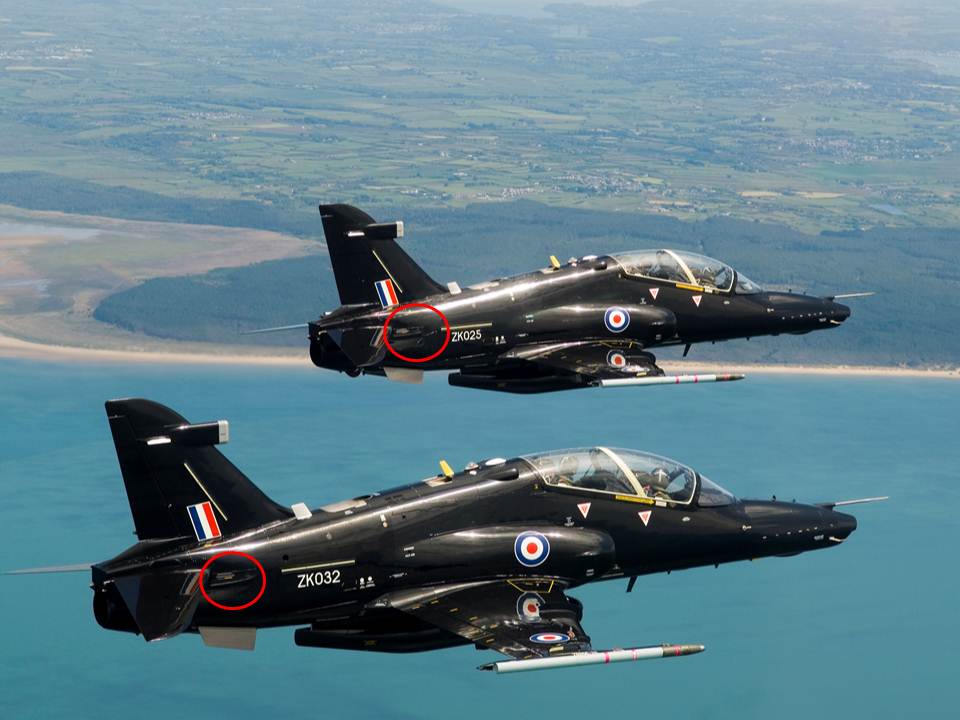 They are called Tailplane Canard Vanes (TCV) or the side mounted rear fins (smurfs). Basically, they are vortex generators to solve the problem of tailplane under surface stall at high (negative) angles.

During flight testing of the Hawk, it was found that the tailplane under surface stall was causing uncontrollable nose down pitch. From The Hawk Story:

It was found that at forward centre of gravity in that configuration, rapid fore-and-aft movement of the control column could induce an uncontrollable nose down pitch, with the nose down attitude and speed increasing quite rapidly. ... It was dubbed the “Phantom Dive”.

The designers fixed it initially by removing the the outboard vane of the flap; however, a better solution was needed and this was achieved by placing a tailplane canard vane in front of the stabilizer. The TCVs created a voretx, that ensured that the control surfaces remained effective by preventing seperation. The image below shows the improvement. 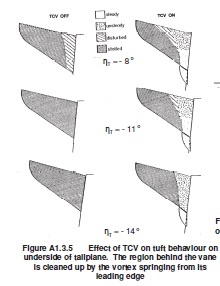 Image from The Hawk Story:

The addition of TCVs solved the problem of tail plane under surface stall. From the same document:

With tail and TCV on, there is ample tailplane authority with aft stick (- $\eta_{T}$ ) at all angles of attack in the usable range.

The addition of TCVs was a cheap and effective solution of the problem of tailplane under surface stall, and allowed further development of the wing to try to achieve the low stalling speeds demanded for carrier operation in the US Navy, and for combat versions of the aircraft carrying heavy store loads.

The paper has quite a lot of additional details on solving this problem, and I suggest you go through it. According to RAF Aircraft & Weapons Guide, the modificaiton was incorporated on the Hawk T2.

You may have noted that the tailplane of the Hawk is a full-flying surface, also called an all-moving surface. When the stick is pulled aft, the leading edge will align with the strake, forming in effect a leading edge extension. This will produce a vortex over the lower surface of the inner tailplane and prevent early flow separation at the tailplane root at low speed.

The obvious next question is: Why is it not part of the tailplane itself? Adding it to the tailplane would increase drag and produce nonlinear control forces. Since it was added later in the life of the design, fixing it to the fuselage allowed to keep the tail surfaces and their actuation unchanged.

Note that early Hawk versions (Mk.1, Hawk 50) lacked this detail. In flight testing, it was found that the Hawk would suddenly nose-dive with full flaps and gear up. This was dubbed "phantom dive". Cutting back the flaps solved that behavior, but later, heavier versions of the Hawk needed more lift, so a different fix had to be found. From the Hawk story by Harry Fraser-Mitchell:

It was shown with the half model of the Hawk at Hatfield that high local downwash at the tail, coupled with the very large nose down pitching moment induced by the flap, was causing the tailplane to stall on its lower surface, so that it could no longer provide adequate balancing power. It needed more lift, extended to higher angles of attack.

In the case of the F-4K Phantom aircraft this was achieved by installing a fixed leading edge slot to the tailplane, harking back to demonstrations of such devices by Handley Page on wings in the early Twenties! A fixed slot with its associated drag was not an option on the Hawk although a cambered tailplane was tried on the model with some success. Removal of the outboard vane of the flap reduced the flap pitching moment to such a value that the standard tailplane could cope, so this was the quick solution for the RAF. However, for the US Navy VTX project, (and for later combat versions of the Hawk) the maximum possible lift was required, so that at least the outer flap vane had to be replaced. The dive phenomenon had to be fixed.

An example of the cross-fertilization of knowledge due to the matrix working of the design department now occurred. Barry Pegram, then Section leader of the Fluid Dynamics section of the Aerodynamics Department, had been working on the adoption of leading edge root extensions (LERX) for the “Harrier” wing, and this work had shown that these devices extended the lift of the wing to higher angles of attack by virtue of the non-linear lift developed by the vortex flow they created. He proposed that these should be added to the tailplane of the Hawk model, but this would have had a serious effect on the tailplane hinge moments. The author, who was working with Barry in the V/STOL tunnel at Hatfield, suggested that the ‘tailplane canard vane’ (TCV), as it was called, could be fixed to the fuselage at such a position that it was lined up with the flow at normal conditions, but with its trailing edge adjacent to, with a small clearance, the leading edge of the tailplane at its maximum nose down position.

Experimenting showed that these vanes could be made quite small and they gave a complete cure to the problem in the wind tunnel, with very little drag in the normal flight regime. To prove the concept in flight, some temporary vanes were manufactured which could rapidly be fitted to one of the test aircraft which had flaps with the full vane. First, the aircraft was flown without the TCV to establish the conditions under which the ‘Phantom Dive’ occurred on that particular aircraft. On a later flight, the TCVs were fitted and the aircraft flown again to the identical conditions as before. Despite every attempt by the pilot to instigate the phenomenon, it did not occur – the vanes were a complete success, even though they looked inconspicuously small for such a large effect.

7
How does the use of Leading Edge Root Extension help in increasing stall angle?

26
How does an aircraft tailplane work?
22
What are the advantages of twin-fuselage aircraft?
0
How to calculate the fuselage geometrical parameters?
14
Why doesn't ice form on the fuselage?
13
Why does the MD-87 have strakes on its engines?
3
Why are the boundary layer suction holes placed far forward from the engine?
3
Why is the nosewheel of the MiG-29 placed in front of the engine intakes?
3
Why don't we place the engine in the front of the wings?