What are the differences between these IFR Low Altitude Chart Navaid Symbols?

Below are three NAVAID chart symbols. There is almost no explanation on the aeronautical chart user's guide. It even says that a navaid with an FSS will be shaded but the third box has an FSS and it isn't shaded!

I would like to understand what everything on each of these boxes stands for. 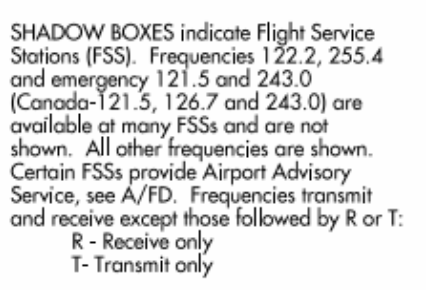 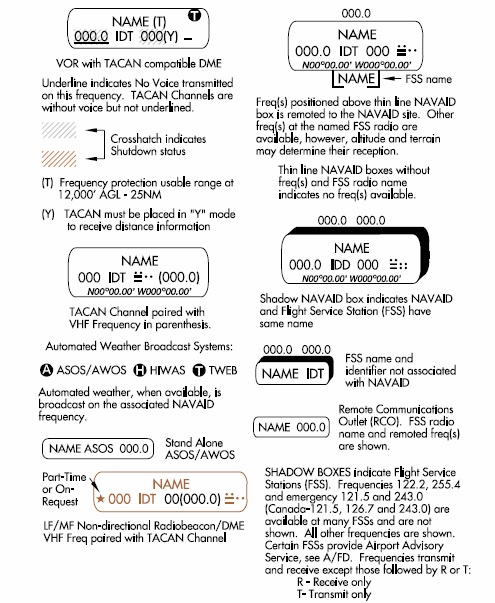 Your top example would have an FSS with the same name as the Navaid, while your bottom example would have an FSS (with a different name) that controls that Navaid -- i.e. can use it to receive & transmit, even though it isn't co-located. The presence of either the shadow OR the FSS name (different from the Navaid's name) in brackets underneath will tell you that there is the ability to contact an FSS at that Navaid; without the shadow & with the FSS name underneath, the FSS is physically located elsewhere. This link (select the "IFR Symbols" tab) has the following graphic:

In the top example in that graphic, you'd be able to talk to Wichita FSS on 122.65 using an antenna approximately at the ICT VOR -- FSS name matches the Navaid name.

4
What are the differences between Canadian VNCs and US Sectional charts?
4
On an IFR Low Altitude Chart what does this symbol mean?
6
Why are there GPS MOCAs?
3
What do these numbers and symbols on the ICAO SIGMET chart represent?
4
What are the differences between blue airports and green ones on the low en-route chart?
19
What do these white on red words indicate on a London Heathrow taxiway chart?
4
Why do TACANs not have a symbol for compulsory reporting on IFR Enroute Low Altitude charts?
2
Considering all US untowered airports, what is the furthest distance that E2 airspace (dashed magneta line) projects from the airport?
2
What does an “X flagged” VOR mean on an en-route IFR chart?