Is it safe and effective to have “glider pilot mentality” when landing single-engine fixed-wing aircraft?

I am a low-time pilot, of approximately 200 hours. I trained on the DA20 and DA40, designs that are derived from the Diamond touring motor glider design(s) of the early 1990s. I anticipate getting my Glider rating this summer in the US. As I've considered getting my glider rating, I've noticed a habit that I've developed that closely matches the "glider pilot mentality" which does not seem so prevalent in my training for ASEL.

I've always preferred using a forward-slip for landing with the engine idle, as opposed to using the throttle to adjust the descent angle. I attribute this to multiple factors, such as being aware of the design history of the DA20, training with its more "glider-like" characteristics, and a general paranoia of the engine quitting on base or final.

This brings me to the following questions: What are the safety considerations for this type of approach? Are there limitations on the use of sideslip on light airplanes?

Edit: Supplement questions, for possible merge or replacement of above. (Taken from my comment below)

Diamond aircraft are very low drag and do not have particularly effective flaps, so sideslipping is certainly an effective way to approach the problem. However there are considerations you need to be aware of:

There's nothing wrong with using sideslip and keeping up with the technique - it's very useful if you catch a thermal on approach, are given a slam dunk approach, or need to get on the ground fast. For me it's not the best tool for normal approaches when you have alternatives, especially if you come in at a very steep approach angle.

One technique I've heard of for approaches on Diamond single engine airplanes is to use a combination of both: a slight sideslip dirties up the airflow enough to create some useful drag, and power is used to maintain the approach angle.

I can't think of a light airplane you can't sideslip, or any airplane you can't sideslip for that matter (perhaps the Mig 15). Sideslipping was used successfully in the Gimli Glider incident, and that was a 767! There are limitations which will be listed in the aircraft documentation, for instance you should not sideslip a C152 above 20 degrees of flap. If I'm flying a C150/152/170/172 I follow that rule.

When we learned to fly in low-lift airfoil tailwheels, with radial or early flat-4 engines, we always expected an engine failure. Patterns were close-in, power was idled turning base (pace winds), and landings were made 3-point in a full stall. And the trainers (eg Cub, Citabria) didn't have flaps, so you learned slips to landing.

With the advent of nose wheels, better airfoils, and the marked improvement of engines, the rate of non-fuel-exhaustion engine failures declined, and we could make bigger patterns and expect that some power would carry us to the threshold.

What we lost is a sense of what it takes to make it to the runway. And indeed the airplane private PTS only needs to show a simulated engine failure: 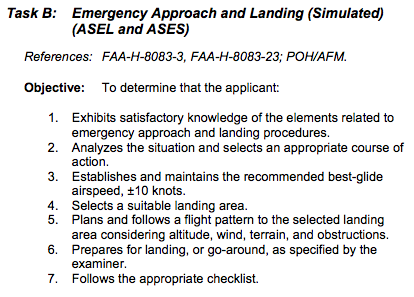 The commercial PTS, however, requires that the pilot demonstrate a power-off 180 landing: 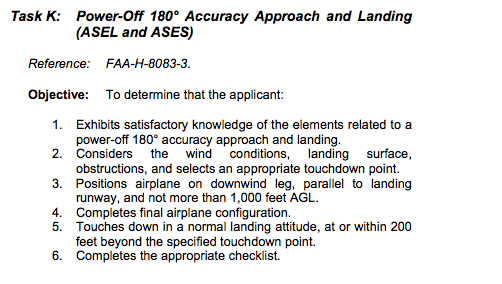 which more closely represents how pilots were originally taught, and how tailwheel pilots are still taught, especially those flying radials and early trainers, like the Cub.

That being said, although slips to landing are a normal procedure, they are not the recommended procedure for either airplanes or for gliders (almost all of which have some kind of drag device).

In all cases, I am high rather than low, and close in rather than further out in the pattern.

A no-flap landing in an airplane, which is a normal procedure, requires more airspeed because the stall speed is higher, so the approach is flatter and the airspeed is higher.

No flap landing checklists in airplanes do not specify a slip, although slips are still used as necessary. In my airplane, a no-flap landing requires 10 knots higher airspeed because the flaps are so effective.

In an airplane that has not-very-effective landing flaps, such as the DA20 (which I have never flown), the airspeed differential between take-off flaps and landing flaps would be much smaller, and indeed this is what shows up on the checklist:

Not the answer you're looking for? Browse other questions tagged safety flight-training glider pilot-technique single-engine or ask your own question.

25
On crosswind landings, is it preferable to side slip or crab on final approach?
24
Why is “dragging it in” considered bad in small aircraft, but fine in larger aircraft?
16
What happens in a stall during a slip?
10
Is it safer to do a regular approach than a short approach?
3
Why is flying in a slip uncomfortable?

36
Is it even remotely feasible to turnback a single engine aircraft with an engine failure?
15
What are the pros and cons of single-engine vs. twin-engine?
10
Why do glider licences have fewer restrictions than powered aircraft?
9
How to reasonably determine minimum safe altitudes over city? (fixed wing)
14
Is there any disadvantage to slipping as a way to lose altitude?
10
Are there any data on the safety rate of gliders vs single-engine GA aircraft?
15
Is it safe to fly a glider when I can't move the stick fully left and right?
4
Why did this pilot have his single-engine license revoked?
1
What is the most cost effective way of combining an instrument and multi engine check ride?
4
How does a remote pilot land a fixed-wing UAV?