How do VTOL aircraft like the V-22 Osprey not tilt?

How do aircraft like the V-22 not tilt under an unbalanced load? if they are only supported by 2 forces on either side a large weight in the back should cause it to lean backward when stationary, should it not? its hard to put this into an image but here goes nothing: 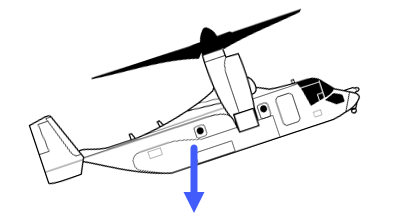 A large weight in the back would surely cause it to lean; original image source

The answer is the same for the Osprey as for a conventional helicopter: the pitch is controlled by cyclic control of the rotor. As the rotor spins, a mechanism inside it changes the angle of attack of the blade (the pitch of the blade) as it rotates. This change can cause it to generate more lift when it's at the rear than at the front (or vice-versa, or left-to-right). This creates a turning moment about the centre of the rotor disk, which counteracts the moment of the unbalanced weight.

You only get so much of a moment with it, though. The aircraft needs that moment in order to change its pitch to manoeuvre. If you had to use the full range of blade pitch (the maximum cyclic control) just to counteract the unbalanced weight, you wouldn't be able to pitch the aircraft any further in that direction. For this reason, the maximum moment of rotorcraft (how far the centre of mass can be away from the centre of lift) is typically smaller than for airplanes.

According to various bits of online documentation, the rotors have cyclic pitch control like a helicopter as well as collective pitch control like a helicopter and most high-performance propeller airplanes (often referred to as having a "variable pitch" propeller). The cyclic on the Osprey is controlled with a swashplate that apparently has only front-to-back cyclic control since side-to-side is not needed. To move sideways, the Osprey would simply increase the collective pitch of one rotor while reducing the collective of the other. Here's a passage from one document I found:

So it works like a typical helicopter and the lift can be adjusted as needed to deal with a variable center of gravity.

I suppose it could, if improperly loaded. But V-22s, like any other aircraft, have weight and balance envelopes to prevent this from happening. And any competent loadmaster and flight crew would load the aircraft accordingly and double check it prior to flight.

Not the answer you're looking for? Browse other questions tagged aircraft-design weight-and-balance tiltrotor or ask your own question.

2
Where is the center of gravity on a tiltrotor?

4
Why are aircraft of Russian origin not subject to frequent weighing and CG calculations like western aircraft?
13
Why does an aircraft pitch up when the speed increases?
17
How does the V-22 Osprey share engine power between its rotors?
3
What is the difference between Tilt-rotor aircraft and Tilt-wing aircraft?
2
what are the advantages and disadvantages of tilt rotor vs ducted jet engine for a VTOL aircraft?
5
How to calculate the power required during transition from VTOL to fixed wing?
2
How to adjust the center of gravity of an aircraft if not level when being weighed?
1
Why don’t flying-boom tankers have collapsible/frangible/breakaway refuelling booms?