How can aircraft determine true north for inertial navigation systems?

Aircraft use GPS and inertial navigation systems in combination. Sometimes INS needs alignment (i.e. to be told where it is AND what orientation it has). How can an aircraft be be aligned to true north for proper INS alignment? Are markings at the parking location good enough?

How can an aircraft be be aligned to true north for proper INS alignment? Are markings at the parking location good enough?

A small 0.5° error in assumed heading translates into 10 NM error in computed position on the distance Madrid-Montreal (3,000 NM). As many other errors must be taken into account, north must be known to a higher degree to achieve this accuracy, and a better accuracy is also expected This cannot be done using simple markings.

But true north is related to Earth spin axis, which can be accurately sensed by an INS using a gyroscope. 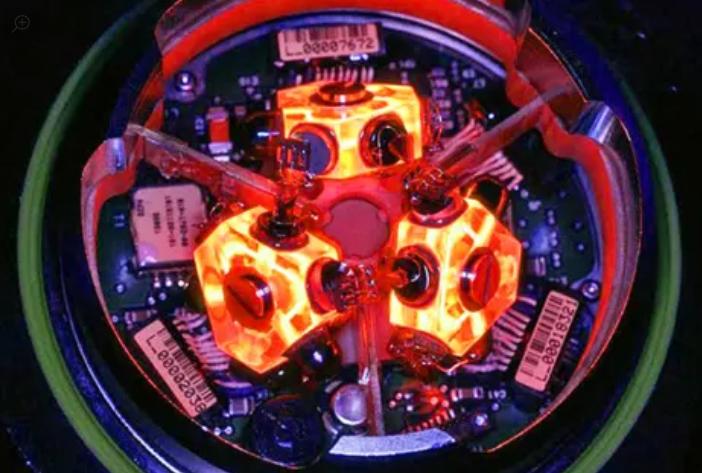 Regardless of the type, alignment is similar and consists in sensing Earth spin axis and gravity, and is twofold: Leveling, then gyrocompassing.

Accelerometers and gyroscopes arrangement in an inertial system, and final orientation: 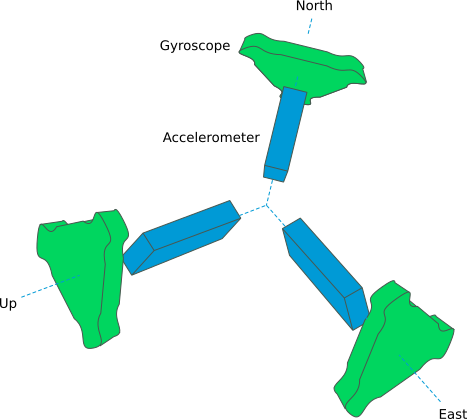 Axes which in the end will point to north and east are in a first step leveled by tilting the assembly. Leveling solely involves accelerometers and gravity.

Leveling is real for PINS, it gives the platform its working orientation, found by zeroing north and east accelerometer outputs while the unit is stationary. After alignment, accelerometers are able to directly sense accelerations along north, east and up directions.

Leveling is virtual (software) for SINS. It consists in evaluating the initial orientation to build a transformation matrix. This matrix is used for projecting the values issued by tilted sensors onto a virtual level platform. The matrix is then constantly updated with orientation changes detected by gyros.

Likewise leveling, gyrocompassing is real or virtual according to the type of inertial system. Gyrocompassing goal is to determine true north using gyros.

After leveling, for a stationary aircraft, north and east gyros (designated X and Y below) sense only Earth rotation, in quantities depending on their orientation relative to Earth spin axis: 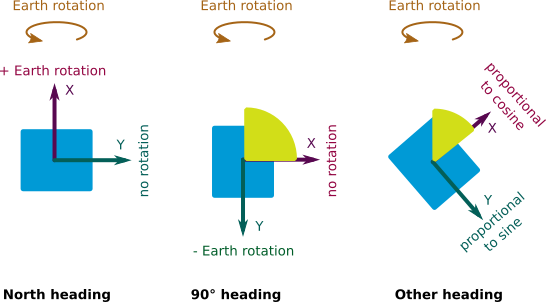 Finding north is done by rotating (virtual rotation for SINS) the leveled assembly about the vertical axis until the east gyro output is null, meaning its axis points to east or west. This ambiguity is removed by sensing rotation direction on the other axis which now points north or south.

Earth rate detection depends on (cosine of the) latitude angle:

Earth rotation rate sensing by an inertial system versus latitude

Merging what we exposed above, the sensed rates Rx and Ry are given by:

With two linear equations for two unknowns, finding latitude and heading is straight forward, the only condition is Rx and Ry are known. That is where the shoe pinches. Gyrocompassing is actually difficult and slow.

Actual application of the principle is challenging

While the principle is simple, it's difficult to measure Rx and Ry. The reason is $\omega$ is tiny (0.004°/s), measures must be repeated during a significant time. Five minutes is sufficient at the equator, but twenty minutes are not unusual at 45° latitude.

The pilot can provide the current approximated latitude to allow this process to converge more quickly.

Sensor fusion, alignment in motion and loss of alignment

Alignment may be facilitated, and subsequent measures can be improved by associating additional sources of data, and merging sources after filtering excessive divergence, this is known as sensor fusion and IRS/GNSS hybridization. These sources include GNSS (position and Doppler velocity), magnetometers, air data, even Doppler velocities of known targets but that's more for underwater rovs to replace GNSS.

The different sources allow to maintain the natural cumulated drift associated with the integration process, which is central to inertial positioning, below some threshold, e.g. thresholds fixed by required navigation performance procedures.

In some conditions the inertial system can even be realigned in flight from GNSS position and Doppler velocity (e.g. Northrop Grumman LCR-110). Such in-flight alignment should be common in the future.

Level and north orientation are kept after alignment by adjusting the orientation and compensating detected aircraft orientation changes. The sidereal alignment is therefore not maintained.

Most inertial systems cannot be realigned in motion, but they can be re-leveled, and while the north direction and the position cannot be recovered, the system is still be able to provide aircraft attitude (mode ATT). 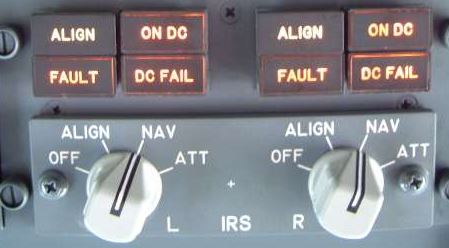 The two IRS switches in the normal (navigation) position (source)

Not the answer you're looking for? Browse other questions tagged navigation aircraft-systems or ask your own question.

13
What is the geoid undulation used for in aviation?
5
How do aircraft instruments determine the aircraft's orientation relative to the ground?
10
Why do we have to perform a full ADIRS alignment between latitudes of 2 degrees North and South on the A320 family?