When to reduce power on takeoff (Cessna 182 or similar)?

There are two sides I've heard when taking off in a Cessna 182 or other small airplane with a normally aspirated engine driving a constant speed propeller:

The POH or Owner's Manual (in my case a 1972 Cessna 182P) simply says Full Power under the Normal Take-Off procedure.

The reasoning I've heard is to try not to over-stress the engine (whatever that means exactly), but on the flip side, I've heard that if an engine is going to do something funky, it's probably going to happen when you do a power reduction, or otherwise do something.

I personally want all the power I can have until I'm far enough off the ground to have options if the engine quits or sputters (turn back if high enough, or glide to a suitable spot if not).

I'm asking is there an "official procedure" as to when you should perform this power reduction (inches off the ground or 700-1,000 feet), and if so, have there been actual studies that say why one way is better than the other, or is this one of those groundless, "endless debates" that are so prevalent in aviation?

The "official procedure" is the one dictated in your aircraft's POH/AFM.
Within the leeway that document gives you (and many of them give you a lot of leeway) this is definitely one of those "endless debate" subjects.

Personally in a single-engine piston aircraft unless the POH directs otherwise or operational considerations (like an altitude restriction from ATC) require something different I would maintain full power (and all other takeoff settings - fuel pumps, etc.) until reaching 1000-1500 feet AGL (depending on what the terrain and obstacles in the area are like), then configure the aircraft for a reduced-power cruise climb if appropriate.
Whether or not the first power reduction is a time of increased failure is irrelevant to me - I operate on the assumption that the engine can fail at any time, and should the engine fail (for whatever reason) I want adequate distance between myself and the ground to make some decisions, confirm my landing spot, and prepare myself, my passengers, and the aircraft for whatever is going to happen next.

1000 feet AGL is my minimum threshold for that sort of activity. It's possible (maybe even likely) that I'm imposing additional wear on the engine in requiring full power for this long, but if the engine decides to fail on climb-out it's not going to matter how "nice" I was being to it on all my previous flights - the only things that are going to matter are my altitude, airspeed, and landing options, and I'm going to want as much altitude and airspeed as I can get to help maximize my landing options!

There are some conditions where I would reduce power sooner than 1000 feet AGL if necessary - for example, if I can't maintain oil or cylinder head temperatures "in the green" in a full power climb a power reduction (or pitch reduction) to keep those engine parameters happy would be in order.

There are also some aircraft/engines which have a continuous power restriction (Full throttle operation limited to 3 minutes, maximum continuous power 2400 RPM, or similar admonitions you'd find in your POH). In those cases the restrictions should obviously be observed (the engineers who set the limitations had a good reason for doing so), and observing those requirements may necessitate a power reduction or other configuration changes prior to reaching 1000 feet AGL.

Finally, I'm not sure what kind of engine is in your hypothetical Cessna but as an additional point of reference Lycoming has this to say about takeoff operations:

Operating Your Lycoming Engines At Takeoff And Climb

Because there are a wide variety of Lycoming engines in operation, the paragraphs below may be helpful in understanding the different modes of operation required when operating each type at takeoff and climb power settings. The Pilots Operating Handbook for the aircraft in which the engines are installed should be the final authority as to how the engine should be operated.

Most normally aspirated engines are rated at full power for takeoff and climb indefinitely, provided engine temperatures and pressures are within the green arc area of the engine instruments. Extra fuel, sensible airspeed, and cowl flaps, if available, are all helpful in keeping cylinder head temperatures within desired limits during takeoff or climb.
Climb requirements may vary; as an example, on a warm day with the airplane close to gross weight, and a direct drive engine with a fixed pitch prop, the pilot will need full throttle all the way to cruise altitude. The same airplane on a cold day and lightly loaded may not require full power for climb. After full throttle at takeoff, the pilot may want to reduce power 100 or 200 RPM and still not see performance suffer. Those direct drive normally aspirated engines with a prop governor are also rated indefinitely at full power, and the manuals all recommend full power for takeoff, but specify a small reduction in power, generally to 85% power climb. Study the specific airplane Pilot's Operating Handbook for detailed power settings.

(They go on to talk about geared engines and turbocharged/supercharged engines, but your question was about normally-aspirated engines. This is from Lycoming Flyer "Key Reprints" - I grabbed it here but you can Google it up pretty easily, and I imagine Continental has analogous guidance somewhere.)

To add to voretaq7's answer: In addition to the desire to gain as much altitude as quickly possible, there is the following consideration: most engine failures happen when the power configuration is changed (a lot of oil is moving through the hub to adjust the rpm, for example), so changing the power should be delayed until you have gained enough altitude for a safe emergency landing (in real life this might not be possible, of course). Thus your second scenario is preferable under normal circumstances.

Generally I would ease power back at circuit altitude, trim and then if a climb was required, then I would climb at cruise revs. 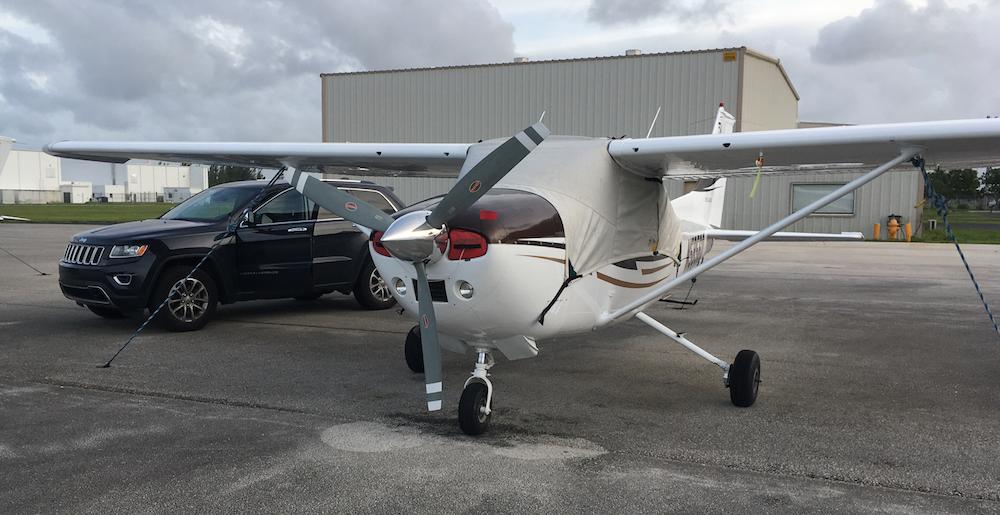 I own a Cessna 182P from 1973... POH says full power until all obstacle are clear, then 23MP/2450RPM and keep full reach mixture... Its a little tricky how to read this... Its also confusing all the information (and rumors) you see out there about the engine failing because some power setting change are made. NOT true. Keep you engine in the best shape possible, proper maintencance and forget about when is going to fail. You will beat the lottery first!

The real point is determine when your are clear of obstacles. Maybe your are clear at just 50 feet, or 200 feet. Will you change your power setting at that little altitude?. Sure not. At that point your are dealing with to many other issues, like making wind corrections, or fighting the usual turbulence when leaving the ground effect, and the most important: looking the engine gauges for any trouble, etc.

However, this MUST be a simple point. So, I use a method of correlation between "Clear of Obstacle" from the POH with the runway I am departing from. Once I pass the point of not return back to the runway in case of an engine failure, I start the procedure of re-configuration of power settings to 23/2450RPM...

Simple as that. Lower the nose a little bit before changing power settings and then execute it gently. The full power is the most critical phase for the engine, don't over extended it with no reason!

Not the answer you're looking for? Browse other questions tagged piston-engine takeoff pilot-technique or ask your own question.

7
Is a lower CHT on one cylinder cause for concern?
32
What is the proper procedure after a bird strike in a single engine plane during takeoff?
2
Does the 300 hp IO550 conversion require an auxiliary tank on the Cessna 182?
7
Should I land a Cessna 172 with or without a little power?
1
How should these translated takeoff and climb settings be interpreted?
4
Can leaning provide more power when running at full throttle?
13
In light aircraft, non-instrument flight, apply (nearly) full aft elevator before beginning the takeoff roll or at some predetermined speed?
1
Is there an actual rated thrust for a Cessna 172 engine at takeoff power?
2
What is the metal sheet in front of the engine called on a Cessna 182 or similar?