Where does the final approach segment begin on an ILS approach?

Where does the final approach segment begin on an ILS approach? It may not be as simple as it sounds to answer. The reason I ask is because I've found some support for at least two answers.

One is that final begins when passing the glide slope intercept point a the last no lower than altitude for the approach. This is the point denoted by the lightning bolt arrow on government charts.

Another answer I've heard is that it begins when glide slope has be intercepted within the limitations of the glide slope and on an approach segment. For the example plate above, this would mean that if the glide slope were intercepted between SILKY and JAKOR the pilot would be considered to be past the final approach fix for all intents and purposes and might even configure the airplane for landing at that point rather than passing JAKOR at the published glide slope intercept.

I think there are valid arguments for both, but I'd apprecate more insight and references on the topic.

No arguments needed, it's very specifically defined. According to the FAA's Pilot/Controller Glossary under SEGMENTS OF AN INSTRUMENT APPROACH PROCEDURE:

So it starts at the FAF, which is defined in the same document as:

FINAL APPROACH FIX− The fix from which the final approach (IFR) to an airport is executed and which identifies the beginning of the final approach segment. It is designated on Government charts by the Maltese Cross symbol for nonprecision approaches and the lightning bolt symbol, designating the PFAF, for precision approaches; or when ATC directs a lower-than-published glideslope/path or vertical path intercept altitude, it is the resultant actual point of the glideslope/path or vertical path intercept.

In your example, that means the final approach segment starts at JAKOR. I may be wrong here, but your original thought might have been that the final approach starts when you're established on the glideslope, which could be outside JAKOR. That makes sense in a general way, but it isn't how the term is defined.

It's pretty easy to answer as best I can determine: The Final Approach Segment begins at the Final Approach Fix. On FAA/NACO charts this is shown on the profile view with the Maltese cross:

The final approach fix may also be marked in the plan view with the annotation (FAF).

You may have intercepted the glideslope before the FAF as you describe in your second scenario (particularly on a continuous-descent profile) or you may have done a dive-and-drive to that point because the glideslope is out of service before starting your final descent as in your first scenario, but for purposes of the approach segments the FAF marks the beginning of the final approach segment.

So basically, the Final Approach Fix is when you intercept the glideslope at the lightning bolt or after the lightning bolt. Outer marker beacons are usually (but not always) co-located with the conjunction of intercept altitude and glideslope. If there are no marker beacons, you can expect to see an annotation stating RADAR REQUIRED. As shown below, the PFAF for the ILS part of the approach is 3100'. The Maltese cross would be the FAF if the approach is being flown as a localizer. 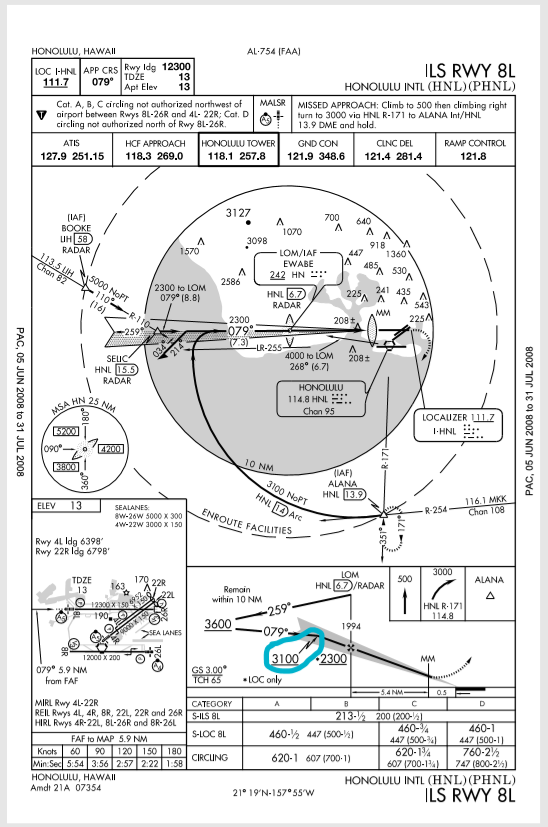 13
When flying a circling approach, is it permitted to begin the visual circling segment prior to the final approach fix?
15
Why is this VDP not authorized?
8
What is the reason for not providing glide slope guidance on the western approach to Innsbruck?
2
Are there ILS approaches where descending by the glide slope outside final might be dangerous?
10
What is the final approach fix altitude for this localizer approach?
3
Is it a violation to list an alternate airport based on an approach your aircraft is not equipped to execute?
1
During an LPV or GLS final approach, can the extension of the aircraft's cross-section line intersect with the Y or X OCS surfaces?
8
Instrument Approaches which do not have a FAF
6
If cleared for an ILS approach at the Initial Approach Fix, where should I intercept the glideslope?