What is the difference between Cruise and Service ceilings?

I am looking at aircraft performance data. There are charts for "Cruise Ceiling" and "Service Ceiling." What is the difference? (The cruise altitude is lower.)

Ceiling refers to the density altitude the aircraft is capable of reaching under a set conditions (configutaion etc.). The main difference between service and cruise ceilings is the aircraft rate of climb at those altitudes. At service ceiling, the rate of climb is 100 fpm. From FAA pilot handbook:

The service ceiling is the altitude at which the aircraft is unable to climb at a rate greater than 100 feet per minute (fpm).

The cruise ceiling, on the other hand, is the altitude at which the maximum climb rate is 300 fpm, though I've not seen it used much. The absolute ceiling is the maximum altitude where the aircraft can sustain level flight. From the same document:

At the absolute ceiling, there is no excess of power and only one speed will allow steady, level flight.

The image below shows the data for A-10. 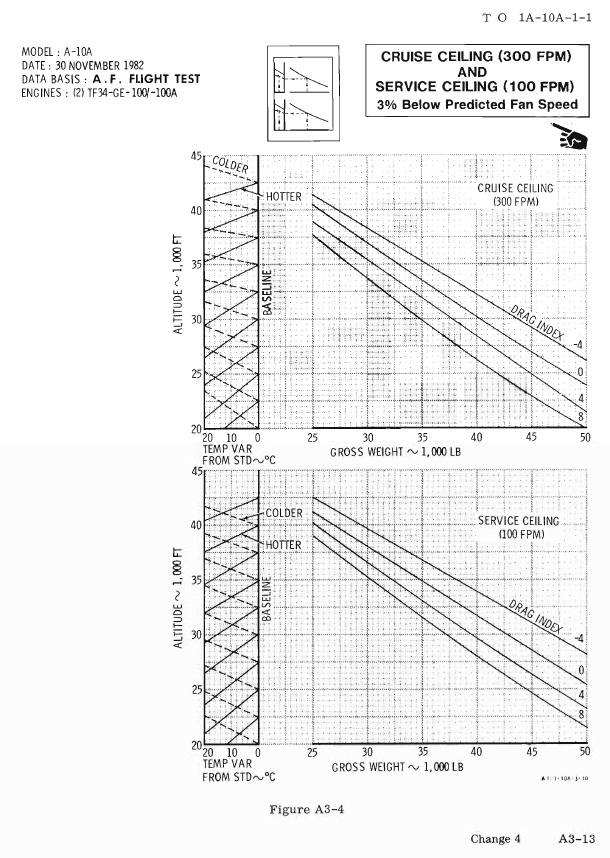 Note that these values depend on the aircraft configuration.

Service ceiling is generally understood as the maximum altitude at which the highest vertical speed drops below 0.5 m/s or 100 ft/min. This assumes a clean aircraft flown at the best rate of climb airspeed.

Since the cruise speed of an aircraft is generally higher than the best rate of climb speed, the cruise ceiling is below the service ceiling of that aircraft.

21
What is the difference between Best Rate of Climb and Maximum Rate of Climb?
10
Is it legal for an SEP airplane to fly above its service ceiling?
1
How Cabin Pressures Are Selected?
0
Why is FL398 the REC MAX altitude on the A320?