What is the best airfoil for Edge 540 Style Aircraft?

I need help picking an airfoil. I'm an artist and have limited knowledge of such things.

It's for a game with an aircraft similar to an Edge 540 / Extra 300. Unfortunately I have a limited selection of airfoils though and need some suggestions for both wing and tail airfoils. (Don't have the ClCdCm for the real Edge)

I do have access to many (not all) of the airfoils listed on this site though. https://aerodynamics.lr.tudelft.nl/cgi-bin/afCDb

Any guidance would be appreciated!

For the Extra 300 which has symmetrical airfoils:

From the service manual of the Extra 300S:

Wing airfoils characteristics seems not available online. On X-Plane.org forum (How X-Plane Uses Reynolds Number), it is suggested to replace the airfoils by NACA 0015 and 0012.

For the pitching moment coefficient Cm:

As an additional information, a study was conducted to evaluate the lift coefficient of the wing (or maybe with the tail) and the lift / drag curve, at a reduced scale: 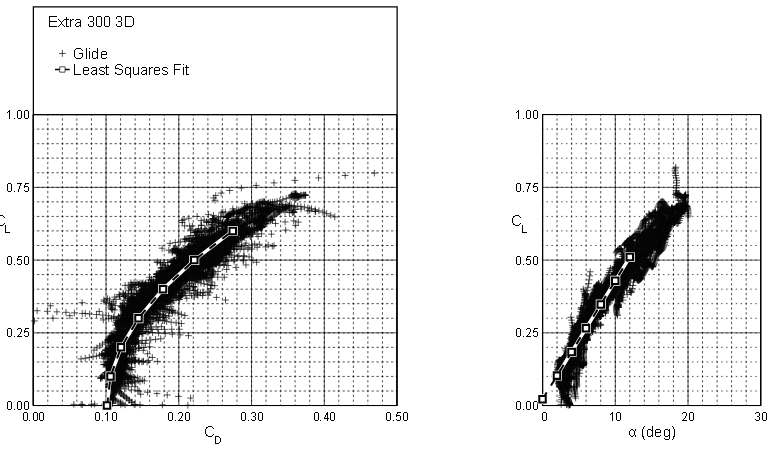 There are a few things to consider for a good aerobatic airfoil. The transition between attached and separated airflow has a big influence for spins or snap rolls, and a good aerobatic airfoil needs only a small change in AoA (angle of attack) to fully transition between the two. To achieve this, it helps to shape the forward part similar to an ellipse (a lemniscatic function, to be precise), and to use a straight line for the last 70% to 80% of chord. The goal is to have a Stratford pressure rise on those 70% to 80% which gives the maximum possible pressure gradient without separation. Increase AoA just a little, and you have fully separated flow over three quarters of the wing chord.

When all works as planned, you can get the plane out of a spin by applying rudder at, say, 45° before the fuselage points in the desired direction and get out of the spin within 10° of that direction. Same goes for snap rolls, they get really snappy. It is a real pleasure to fly such planes, but you need some discipline. There are no aerodynamic warnings before you stall, and stalling comes immediately. On the other side, with the limited lift loss of such an airfoil and the powerful engines of aerobatic airplanes, stalling is no big issue.

The next thing to consider is relative thickness. Modern aerobatic aircraft are rated ±10g (note that FAR/JAR only requires ±6g in the aerobatic category), so a thick root airfoil helps to keep the structural mass down. On the other hand, maximum lift is possible with a thickness around 12%, so the compromise is to taper the wing from 15% at the root to 12% at the tips. The airfoil numbers given by mins refer to the relative thickness as percent of chord.

None of the airfoils in your collection (which looks awfully like an older version of Michael S. Selig's UUIC database) will fit well. Go ahead and design one with XFOIL and use the calculated polar.

6
How do I choose the correct NACA airfoil for my requirements?

2
What airfoil simulation software is suitable for a cut trailing edge?
5
What is the name of this airfoil?
7
What are the conditions for an airfoil to be a "thin airfoil?"
4
How do we determine whether the airfoil trailing edge should be cusped or pointed?
4
Is it best to use a thick airfoil or an undercambered airfoil for slow speed flight?
12
Why isn't there a single best airfoil for subsonic flight?
4
What are Uses of thin airfoil and thick airfoil?
2
Could leading-edge dynamic stall occur for a tripped airfoil?