Why are emergency vehicles needed for a runway excursion?

When passenger jets have a runway excursion incident such as this one in Birmingham it is apparently common practice to send emergency services vehicles to the aircraft. 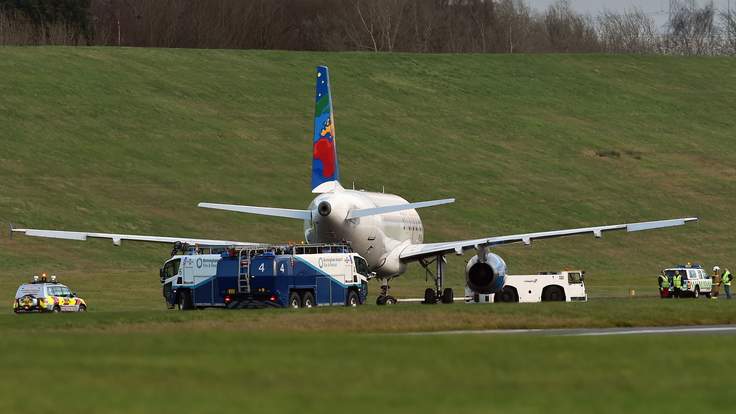 Why are emergency services vehicles necessary?
I would think the plane is more than capable of getting back onto the Tarmac, so why doesn't it?

Why are emergency service vehicles necessary?

Something might have been damaged. What if something was and there is a fuel leak somewhere? Hydraulic leaks are also dangerous, and more likely as hydraulic lines run to the brakes and nose wheel steering. Better safe than sorry, so emergency services go check.

Sometimes, they also disembark passengers via the ladder if it looks like towing the aircraft to terminal will take too long and the aircraft is on unpaved surface where the mobile stairs have trouble going.

They can also help with moving the plane, especially on smaller airports that only have one runway and so have to close until the plane is moved away anyway.

I would think the plane is more than capable of getting back onto the Tarmac, so why doesn't it?

No, it isn't. Aircraft not designed for unpaved surface will usually sink in somewhat, especially if the ground is wet, and require a lot of power to pull out. Sometimes, the tow truck is enough to get it out, sometimes they have to put planks under the wheels and sometimes they have to get out hydraulic jacks or inflatable support bags.

Even if the plane did not dig in and is easy to move, providing the power with the engines is not a smart thing to do, because the engines will throw up dirt and stones that could damage them, other parts of the aircraft, or something else around. Tow truck is much better for that job.

Going off the the runway can be pretty rough. It not unlikely that a passenger got injured or part of the plane got damaged.

Going full throttle on the jets will rip up the dirt and grass and fling it everywhere. It will also put quite a bit of force onto the landing gear which already got a beating from going into the grass.

Much safer to tow it back. You can see the white towing vehicle in front of the plane.

Not the answer you're looking for? Browse other questions tagged commercial-aviation accidents runway-overrun or ask your own question.

6
How are runway incursions avoided?
23
Where is the safest seat in the plane?
16
Why did air traffic levels decrease dramatically in the US through the 2000s?
8
Are tripropellant jet engines a viable way to increase fuel efficiency for large commercial airplanes?
3
Why are autonomous vehicles not used at airports for on-ground services?
51
Why don't commercial passenger safety videos ever explain policy instead of merely dictating it?
5
What criteria are used for exiting an airplane in an emergency?
2
In the old days, why didn't aircraft use simpler systems to land on a Carrier?
31
What do flight attendants do if a passenger asks what is going on in case of a potential emergency?