What phenomenon causes the increase of drag with rain?

I know that rain generally worsens the aerodynamic propeties of an aircraft.

I'm wondering what processes cause the increase in drag.

Several things I can imagine, although the effects might be small:

I hope somebody can clarify what magnitude these effects have, and if there are any more effects that cause an increase in drag when flying in the rain.

While Peter Kämpf already commented the effects I'll take a look at the numbers. Don't expect this calculations to be exact predictions, rather worst cases to know the magnitude of following effects:

After deducing some equations I'll feed them with the data of two different airplanes.

Mass increase due to rain drops

The dew layer you find on your airplane in the morning can reach a maximum altitude of 0.8 mm. Raindrops, which do not fill the complete wing surface, don't usually exceed 2 mm diameter.Therefore taking an average distributed height of $h_W=1mm$ for the water on the wing should be still a worst-case prediction.

$A$ is the projected area of the aircraft on the horizontal plane and $\rho_W$ water density.

Forces due to drops hitting the wing

Normal rainfall intensities are about 5 mm/hour and we already speak about violent rain with precipitation rates beyond 50 mm/hour. But let us take the heaviest rate ever measured: $I_R=38mm/min$.

To simplify the calculation I'll assume vertical rain and that once a drop hits the airplane it sticks to it. In reality you don't accelerate every drop to the airplane speed nor slow its vertical speed down to 0.

Early tripping of the boundary layer

While it's possible to find airfoil polars in rain searching the Internet, I'll first look at a "bugs influence" diagram where you can see the effect of small disturbances at the nose without other effects overlayed. Bugs and raindrops are similar in size, therefore the comparison should be valid. 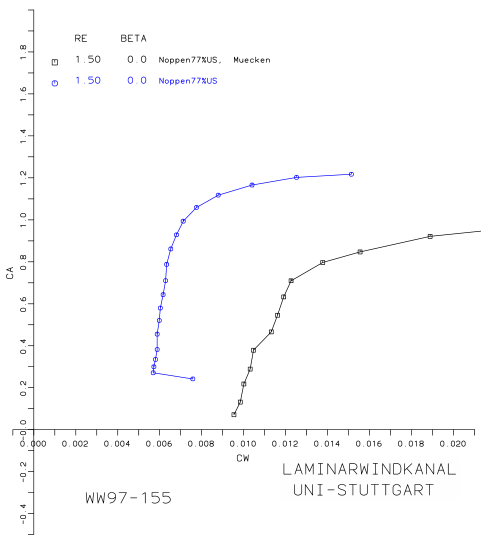 The polar above shows how the drag can double (100% increase)just because of some small disturbances at the leading edge. Keep in mind that in modern profiles the effect will probably be smaller. The next polar is from a transport aircraft airfoil. 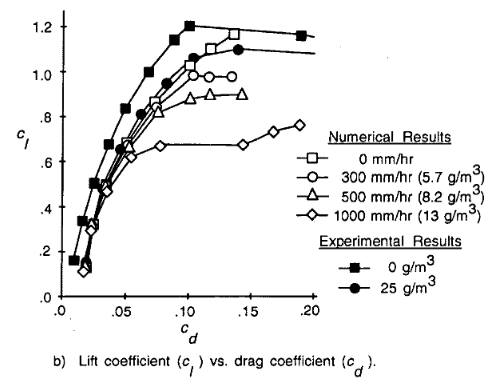 While not so important as in the glider airfoil, the drag coefficient increase (experimental results) is everywhere at least a two-digit percentage.

I've taken two airplanes with really different wing loadings: A1 would be something between the two Solar Impulse models and A2 a single engine four-seater like a Cessna 172. The last three rows give the drag, lift and mass difference as described above as a percentage of its total value.

For a normal GA airplane the water mass on the wings and the lift decrease influence due to raindrops hitting the wing even considering the worst possible conditions are low single digit percentages.

While drag increase due to drops hitting the wing is relevant in the extreme case I took here, under normal conditions it should be below single digit percentages too.

On the other hand the drag increase due to the early tripping of the boundary layer is at least a two digit percentage, at high lift coefficients even more.

Fly a Schempp-Hirth Janus or a PIK-20 into rain. The effect will be dramatic. Make sure you have some place to land nearby! In both gliders your rate of sink will triple and the minimum speed will increase by maybe 20 km/h, so make sure you come in fast for landing while the wing is still wet.

The reason is the airfoil, the Wortmann FX 67-170. With 17% relative thickness and a very long laminar boundary layer, the recompression cannot be handled by a boundary layer which has been tripped near the leading edge. The consequence is flow separation already at moderate angles of attack if the wing is dirty from bugs or rain. The flight performance changes dramatically.

Then perform the same with a Schempp-Hirth Discus or an ASW-20. Sink speed will increase, but the effect is much less dramatic and the minimum speed will barely go up.

There is no general rule of thumb, and two of the three reasons you suspect are indeed the major effects: Added mass from the water film over all upper surfaces and early tripping of the boundary layer. In big aircraft where the transition happens close to the leading edge anyway the difference made by rain is very small. It might even help by increasing engine thrust: Rain will cool the air and by absorbing heat when vaporizing will lower the temperature rise in the compressor of a jet engine. Note that many early jets used water injection to increase engine thrust on hot and high airfields.

For small aircraft with their lower volume to surface ratios the mass increase is more noticeable, and if the airfoil was optimized for minimum drag in clean conditions the early transition will effect a dramatic change in a few cases. The airfoils of most powered aircraft are not nearly as sensitive to rain. Normally, those aircraft are flown VFR, and the drop in visibility caused by rain will be the biggest effect.

25
How do insects decrease aircraft performance?
20
What makes snow on the wings during take off so dangerous?
0
Do aerodynamic forces depend on the materials of the wing surfaces?

20
Do box-wings suffer from induced drag the same way as normal wings?
11
How big is the influence of color on the stability of the boundary layer?
2
Are these pressure and velocity distributions calculated by CFD simulation correct?
5
For a large commercial plane on landing, does the L/D ratio increase, decrease, or not change much?
14
What exactly happens when I try to maintain the flare when coming to a hover?
8
How does Reynolds Number affect skin friction drag?
4
How does wing flex reduce wave drag?
6
What is the effect of flow separation on lift, pressure distribution and drag?
10
Why do wall-to-wall airfoils in wind tunnels produce no (or infinitesimal) downwash?
4
On a constant speed propeller, how is blade pitch related to airspeed and efficiency?