How close do you have to be to an underwater black box to detect it?

The news keeps talking about the black boxes on aircraft that end up in water, and one thing that keeps coming up is the underwater locator beacon that transmits a signal for 30 days if it gets wet.

What kind of signal does it transmit and what kind of range does it have? I'm guessing that the depth of water that it is in will affect how far away that it can be detected, but by how much?

This excellent explanation is taken from Avionics News in 2006:

FDRs are equipped with an Underwater Locator Beacon (ULB). If you look at a picture of an FDR, you will almost always see a small, cylindrical object attached to one end of the device. 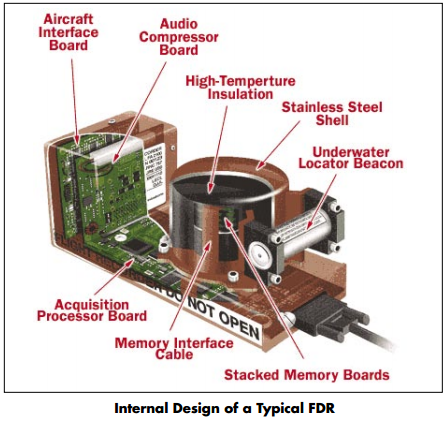 If a plane crashes into the water, this beacon sends out an ultrasonic pulse that cannot be heard by human ears but is readily detectable by sonar and acoustical locating equipment.

There is a submergence sensor on the side of the beacon that looks like a bull's-eye. When water touches this sensor, it activates the beacon.

The following table is taken from a fascinatingly detailed article on Hydro International about the retrieval of black boxes. It shows the radius you can pick up the signal of a pinger from: 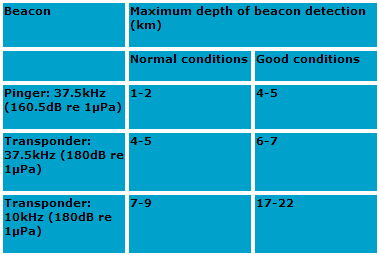 Notice that if pingers were replaced with more powerful transponders, the range could be drastically improved!

The article also points out, that in very deep water:

under normal conditions, the existing pinger would not be detectable from the surface in depths exceeding 2km

3km..just one mile away from the source. They must be right over it, if they heard the ping for 2 hours 20 minutes. But the Chinese guys with the more primitive gear...what were they hearing...maybe the other recorder.

Sound waves travel through water for incredible distances. For example world war two mines were still to be heard many hundreds of miles from the original source of the explosion and more interesting, they were heard several years after the event that caused the sound wave, so it is probable that it was the sound waves of pings rather than the actual ping that has been detected.

I think it does -- per the table in Danny Beckett's answer you have a maximum of 7km range. If the black box is 4km deep in the water, you would have to be no more than 3km from it to hear it.

Not the answer you're looking for? Browse other questions tagged flight-data-recorder cockpit-voice-recorder search-and-rescue or ask your own question.

1
Depth and range for FDR/CVR black box detection
3
Could you encode data in a Black Box ping?

18
Why don't black boxes have their own GPS?
3
Could you encode data in a Black Box ping?
23
Why are FDRs and CVRs still two separate physical devices?
3
How do airlines (or the government) retrieve information from the black box of an aircraft?
3
What is the form of information stored in black box?
3
How much does a Black Box Underwater Locator Beacon (ULB) cost?
7
How to find black boxes underwater absent any pinger signals?