Why shouldn't you inflate your life vest until you're outside the airplane?

On commercial flights, in part of the pre-flight safety demonstration, you're told in the event of a crash, not to inflate your life vest until you're outside the airplane — why is this? 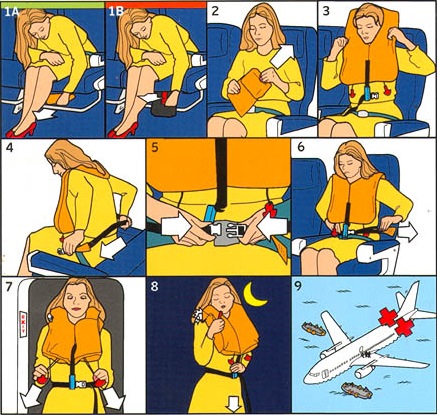 Ethiopian Airlines Flight 961 was the flight that resulted in this addition to the safety briefing.

After being hijacked, the plane eventually crash-landed in the ocean. Many passengers died because they inflated their life jackets in the cabin, causing them to be trapped inside by the rising water.

In addition to the risk of being trapped mentioned by Danny Beckett, the overwing exits are small. If you inflate your vest before exiting, you'll have a harder time getting out, and you're more likely to tear the vest.

The main reason not to inflate prior to hitting the water & getting out is that most likely the person would need to swim under water to get out and with Ethiopian Airlines Crash, a lot more people actually survived the impact with the water, but because they inflated their life vests before the crash, the vest pushed the people to the top of the plane, thus making it impossible to swim out. One would think that if someone is fighting for their life and had inflated they would push up on the vest and try to push themselves down to get it off, but I think once inflated, the vest is fairly snug, which may make pulling it off by pushing up & forcing your body down hard to accomplish. Plus with injuries, even harder. I just think a lot of people on planes are older or have children traveling w them or can't swim, which complicates matters even more. All I know is that after watching "Aircrash Disasters" that from now on when I fly, I'm bringing 1) spare life vest (to inflate - not put on) to use as a cushion in the event of impact. 2) leather coat - a mid to long length one (in the event of fire, leather protects the body to a degree - plus sharp debris etc) 3) sit in the back of the plane. If you look at the majority of survivable plane crashes, most of the survivors are usually seated 1) over the wing, which is the most structurally stable part of the plane (strongest part) - plus, emergency door is usually above the wing, but it's a double edge sword because the fuel is stored in the wings! So fire could get ya! Explosions etc. 2) Back of the airplane / tail section: in quite a few survivable crashes - the only survivors were at the back of the plane - such as the Japan Airlines crash into the mountains of Japan - over 500 people died. Main reason is because Japan refused the help of the us military that had a nearby base & found the crash site 1st. Japan sent a military helicopter & the pilot "assumed" there were no survivors because he didn't see people moving about. Which is nuts! Because after a crash that bad, are people supposed to be jumping up & down? the Japanese military waited until the following day to go to the site (plus they didn't have night vision equipment) and were shocked to find 4 survivors - the survivors were all women all seated in the back of the plane - the tail snapped off & was flug away from the fire/ main crash site. All of the survivors reported that they heard people screaming & crying out in pain and for help. I just can't believe Japan waited until the next day to send anyone to the crash site and let those poor people die. Over what? Not wanting the help of the us military? Everyone else (other countries) seem to gladly take the help of the us. Seems senseless to me. But anyways - back of plane is the safest spot in the plane in my overall opinion. Leather coats, blankets, pillows/anything that can serve as a cushion all can help increase survival/injury rate. The only other thing that can be a huge help is a smoke hood - but we won't see those on planes because it was deemed that smoke hoods would slow people down on evacuating due to the fact people would stop to put the hood on instead of just immediately trying to get out of the plane. Maybe we should just buy our own hoods & in the event of a firery crash throw the hood on while bolting to an exit door! Lol

Not the answer you're looking for? Browse other questions tagged safety passenger airliner ditching or ask your own question.

29
What is the bag for on a passenger oxygen mask?
12
Why are safety demonstrations done while taxiing?
2
What are the safety demonstration time-constraints?
16
What percentage of airplanes are involved in a crash in their lifetime?
51
Why don't commercial passenger safety videos ever explain policy instead of merely dictating it?
9
If cabin lights are dimmed during night landing so that your eyes will get used to the darkness, why do they let you use the reading lights?
34
Why can't you ditch your aircraft in the sea?
26
Why do all airliners have life jackets?
5
Why do they tell you to tie your lifevest on the left side during safety briefings?