In what manner was the Vympel R-73 (AA-11 Archer) a game-changer in comparison with NATO's missiles?

I have heard that when the Vympel R-73 air-to-air missile was introduced it was a game-changer.

I have also heard that after the collapse of the Soviet block it was tested by NATO (via re-united Germany) and NATO was quite impressed by it. According to one source, in close combat the MiG-29 was better than the F-16 by 2:1 and better than the F/A-18 by 1.5:1.

What was so special about it? How did they make it? Did they have better experiences? Or ideas?

The Russians brought some new ideas to the missile warfare when they mated the Vympel R-73 with Mig-29. The most important of these was the high offset sensor lock mode, which allowed the pilot to 'lock on' to the targer regardless of where the nose was pointed at. According to Peter “Stoini” Steiniger a JG 73 Pilot, who flew Mig-29s in East Germany,

The nice airframe in combination with one weapon was the killer: The Archer in [sensor lock] mode.” Introduced in the mid-1980s, the Archer AA-11 is a very capable heat-seeker with a greater range than the U.S. Sidewinder. “A simple monocular lens in front of my right eye enabled me to slew the seeker head of the missile onto my adversary at high angle off [target].” The Fulcrum’s ability to lock a missile even though its nose was pointed far away from its target “watered many eyes,” ...

The image below shows the missile aiming sight mounted on the helmet of a JG 73 pilot. 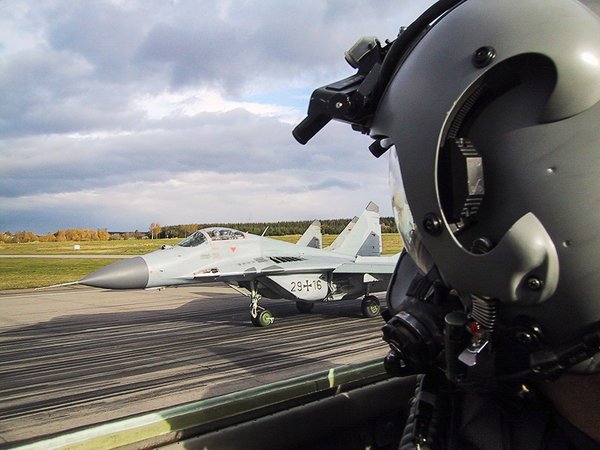 This off boresignt advantage was not achieved by the western forces till they introduced the AIM-9X missile and the Joint Helmet-mounted Cueing System in 2002.

Aircraft-wise, the Mig-29 was a revelation to the west as the previous Russian designs have not been so sophisticated, so as to speak. The West was concerned enough with Mig-29 to start looking for new fighter ideas. Another important equipment in Mig-29 was the Infra Red Search and Track System (IRSTS), an idea for which the US is just warming up. Most of the exchange pilots, who flew the Mig-29 against the US F-15s and 16s were quite surprised and initial engagements usually went the 29s way, though techniques were later devloped exploting the Mig-29s' weaknesses. From an USAF exchange pilot:

From BVR (beyond visual range), the MiG-29 is totally outclassed by western fighters. Lack of situation awareness and the short range of the AA-10A missile compared to the AMRAAM means the NATO fighter is going to have to be having a really bad day for the Fulcrum pilot to be successful.

Yes, the Russians had the better ideas.

The key was the slaving of the radar system to the pilot's helmet, called sight-controlled missile targeting: The missile would lock to whatever the pilot was looking at. In combination with the wide off-boresight capabilities of the aircraft's radar and the missiles, it even allowed to get a lock on aircraft flying actually behind it. When US F-16s met ex-GDR MiGs in exercises in the early 1990s, they were shocked to find how much superior the Russian design was.

From the second link:

With the Phazotron NIIR N019 Doppler radar (NATO designation "Slot Back") capable of detecting a target more than 60 miles away, infrared tracking sensors, and a laser rangefinder carried on the MiG-29, a pilot could track and shoot at aircraft flying below him. Also, the pilot's Shchel-3UM-1 helmet-mounted aiming device turned the MiG-29 into a very dangerous threat once opponents came within visual range. No longer did a pilot have to turn his aircraft toward a target and wait for his missiles' sensors to "lock-on" before firing. Now, the pilot simply turned his head toward a target, and the helmet aimed the missile's sensors toward the target. This "off boresight" procedure gave the MiG-29 pilot a great advantage at close range.

According to this article, the main reasons were its exceptional mobility and accuracy. It can maneuver well enough to hit an aircraft in a 12 G turn, and has incredible accuracy, due to a direct connection with the pilots HUD, sophisticated infrared targeting, and a system called a "transverse control engine" (the details of which are apparently classified) to ensure that the target can't out maneuver it at the last second.

Not the answer you're looking for? Browse other questions tagged military missiles russia or ask your own question.

63
Are the guns on a fighter jet fixed or can they be aimed?

10
Do fighter jets have forward-looking radar warnings for missiles, and when was this first implemented?
7
Why was the Yak-9U covered with Bakelite?
6
Do different types of missiles indicate different lock tones to the pilot?
12
Why was the Sukhoi Su-47 Berkut never adopted for service?
2
What is the difference between "x" and "+" configuration in missiles?
14
How do mixed-bag-of-hardware military coalitions handle communications, IFF, et. al. interoperability?
2
Which military aircraft does this seem to be? [F-16 vs MiG-21]
8
In missiles, what actuators are used for the control surfaces?