For example, if a plane is flying from Amsterdam to Miami and is in the middle of the ocean, who manages that traffic? The ARTCC? Or the airplane just flies without communicating for some hours until it reaches an ARTCC area?

In the civil aviation domain, international rules are proposed by ICAO. The foundations of these laws have been agreed in 1944 under the Chicago Convention, in particular its Annex 2, Rules of the Air. Nearly all countries are signatories of this convention.

ICAO global airspace structure is divided into large Flight Information Regions (FIR -- their upper layer being conventionally named UIR). A FIR over a domestic airspace is under the responsibility of the country below. A FIR over the international airspace (e.g. airspace over international waters) is under the responsibility of a single ICAO member state which has received a delegation from ICAO.

Within a FIR, enroute services are provided by Area Control Centers or ACC (ARTCC is the FAA local name for ICAO ACC). The first services available (and guaranteed) are information and alerting. Control services like separation can be provided, depending on the FIR.

(That's unfortunately a lot of acronyms, and more are coming soon... I give them only for precision in case someone wants to dig further into details, but you don't need to remember them to understand the system.)

When a FIR provides control services over an ocean area, such area is named Oceanic Control Area or OCA, and the corresponding ACC are named Oceanic Area Control Centers (OAC). OAC and ACC differ by the procedures they can use to provide their services: ACC are able to track aircraft using reliable radars, while OAC mostly work with voice/data position reports from crews over unreliable long distance communications (that's less and less true with modern means like space-based ADS-B and ACARS/CPDLC/DCPC (see Guidance Material for ATS Data Link Services in NAT Airspace here).

All flights which want to maximize (eastbound) or minimize (westbound) the effects of high altitude jet streams of the day over the Atlantic Ocean must use the crowded North Atlantic Organized Track System (NAT-OTS, not to be confused with NATS Holdings, the UK ANSP) when flying at or above FL55. They must obtain an oceanic clearance from the first OAC before reaching their entry point into the NAT-OTS. So to answer directly your question: 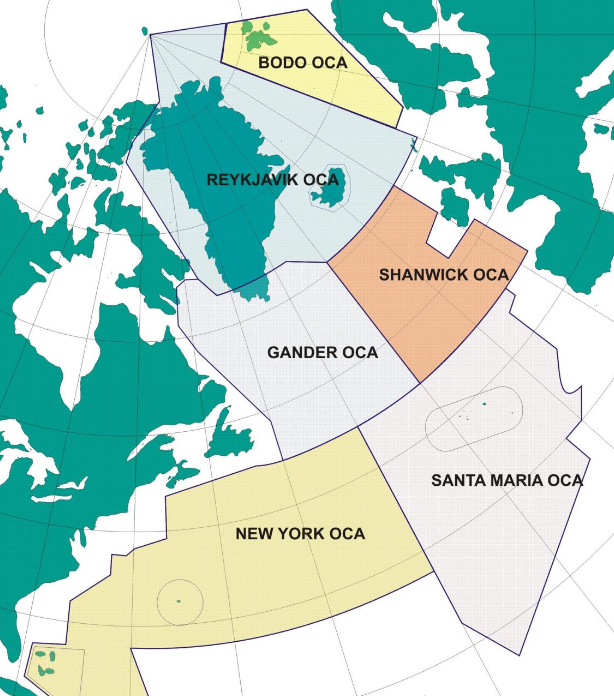 A common route for the flight you mention will cross Shanwick and Gander OCA.

FIRs and their boundaries worldwide can be displayed with this ICAO GIS viewer (be patient at the first use, background resources take time to load): 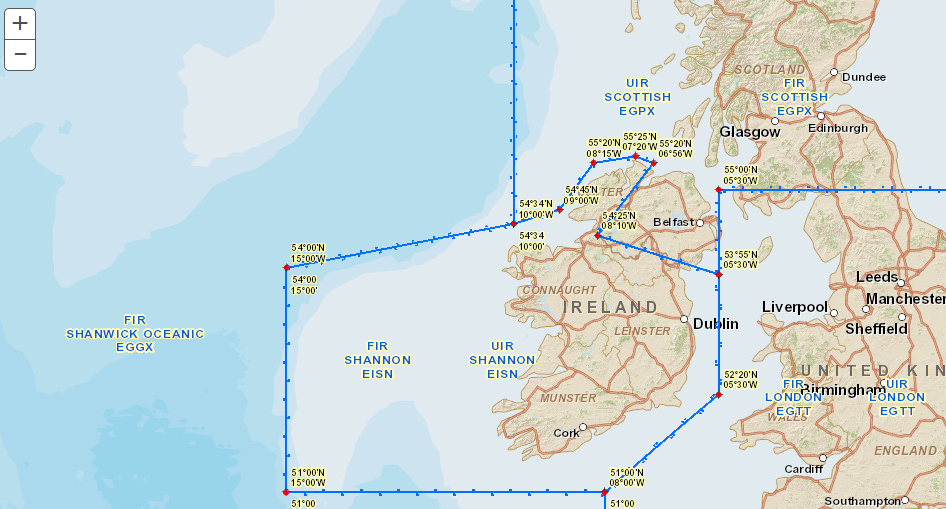 Not the answer you're looking for? Browse other questions tagged air-traffic-control commercial-aviation or ask your own question.

-1
When flying commercial a/c form US to Latin America by GPS which agency controls the flight?
1
Who does air traffic control to the oceanic flights?
34
Why is there a strip of uncontrolled airspace between Russia and Norway?
12
What ATC entities does a commercial airliner communicate with?
6
Why has flight UA106 such a strange predicted flight path?

5
Who controls VFR flights in class B airspace in Europe?
3
why are regional cruising altitudes higher than those of international much longer flights?
14
How does handover between Air Traffic Controllers work?
16
Is « Shepherd One » really used internationally by air traffic control for Pope's flight?
7
Who manages air traffic during Red Bull air races?
2
ATC calling out regional airlines in traffic advisories: phonetic or "aircraft paint" airline used?
6
How universal are air traffic control systems, training and practices?
3
When should I notify ATC when I notice that I may have conflicting traffic?
4
Can a VFR flight reference a waypoint in communication?