Why were "pattern a" and "pattern b" removed from the Instrument Flying Handbook?

If you search around on the Internet, have an older copy of the Instrument Flying Handbook, or talk to a seasoned CFII, you may run across the concept of "pattern a" and "pattern b." These were exercises which involved tracking courses, flying procedure turns, hold entries and sometimes constant speed climbs and descents. They seem like valuable maneuvers for honing instrument flying skills.

At some point in the last several years they seem to have been removed from the Instrument Flying Handbook. I don't actually own an out-of-date copy of the handbook to verify this, but if they were removed I'm wondering if anyone knows why. Does the FAA frown upon the use of these maneuvers in training?

Beyond the question itself, I'd love to find a current publication that teaches pattern a and pattern b for reference.

I can't say for sure, but I would assume that the pattern-based drills were removed because of the new emphasis on scenario-based ("real world") training the FAA has been moving toward: While Pattern A and Pattern B are useful for honing your skills (and I'll even admit they're kind of fun to fly) they're not something you'll fly in the "real world" - you are unlikely to string together that particular set of elements in that particular order on any kind of regular basis.

That doesn't mean the Pattern A / Pattern B maneuvers are not useful tools or that the FAA "frowns on" them - they really don't care how you acquire the skills necessary to pass your checkride and if flying Pattern A / Pattern B helps then by all means fly your heart out! Just know that when you take your checkride you will not be asked to "Fly Pattern B" - it's not an element of the practical test.

A copy of the maneuver diagrams for Pattern A and Pattern B can be found in Gleim's Additional Instrument Flight Maneuvers handout, which also has some valuable notes on how the maneuvers should be performed.

Personally I prefer the diagrams from Privilege Aero because I find them a little easier to read (Patterns A & B are listed as Patterns D & E respectively, except the Gleim version of Pattern B includes a descent & go-around at the end of the hold).

I've reproduced the Pattern E diagram below in case any of the links above break. 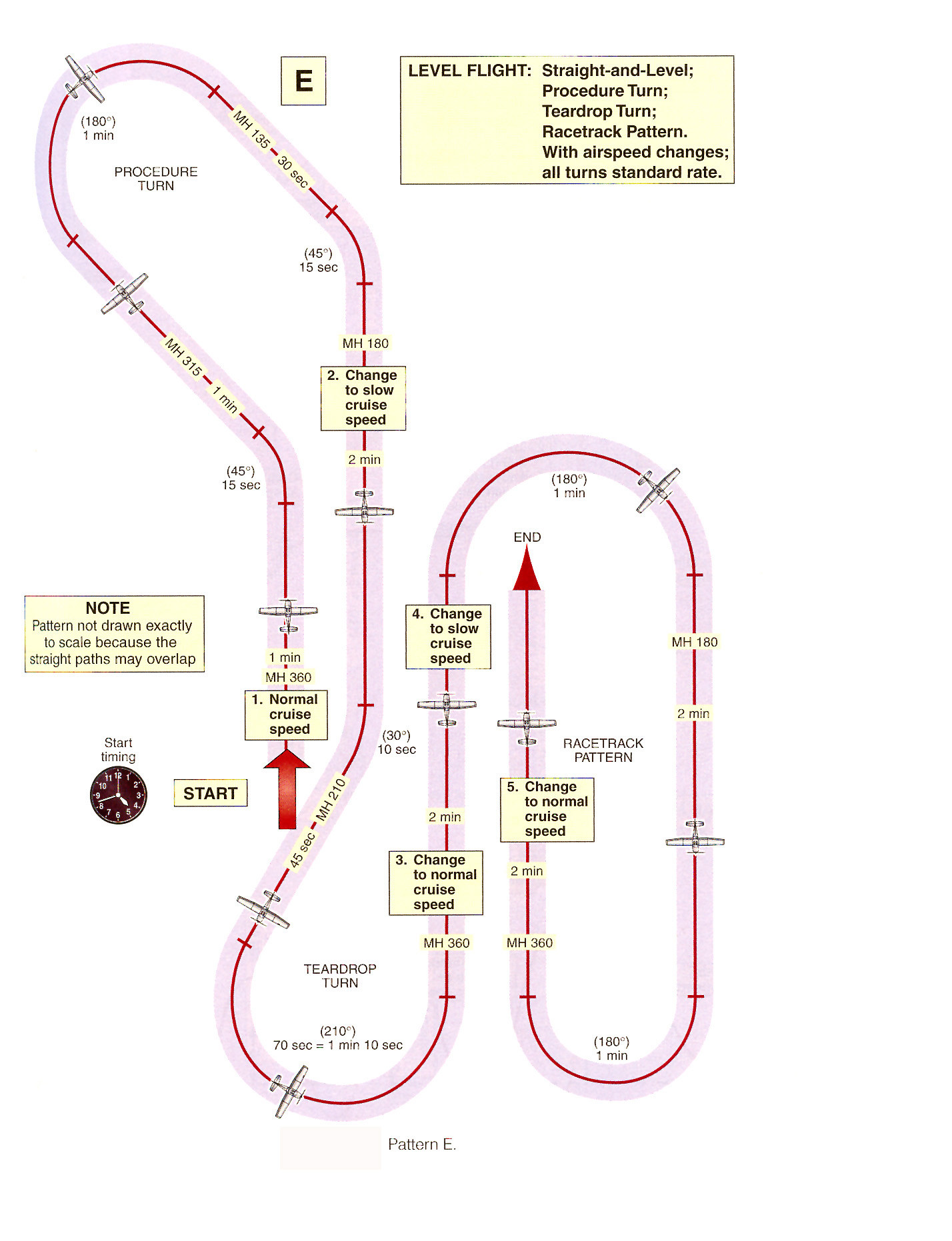 Not the answer you're looking for? Browse other questions tagged flight-training instrument-flight-rules faa instrument-procedures or ask your own question.

7
Why do double-ended ILS runway share the same frequency from both sides?
5
Why were DHL611 and Bashkirian 2937 on a collision course?
9
Why is the VFR traffic pattern area at some airports different from its IFR circling approach area?
8
Can an instrument procedure be intercepted from the middle and how?
1
What's the difference between the Multi Engine Instrument Rating and Instrument Rating in Canada?
1
Do most flight schools and FBOs in the US prohibit student pilots from practicing stalls while flying solo?
2
Why are primary and supportive instruments in instrument flying different depending on the phase of flight?
7
Why is a right pattern the standard for a hold?
4
Why and how would I land straight-in from a circle-to-land approach?
3
Why does this holding pattern have both minimum and maximum altitudes published?