How do you calibrate the compass of an aircraft on a compass rose?

A follow-up from this question; one of the answers mentioned that the compass rose in the picture was used to calibrate an aircraft's compass.

But how does that actually work? Do you park the aircraft on top or something?

Most aircraft compasses include compensating magnets to correct for installation error (due to natural magnetic fields in an aircraft from steel parts and electrical equipment). When installing a new compass or performing significant electrical work on an aircraft the compass may need to be re-calibrated and the compensating magnets adjusted (typically by turning small screws, like the ones shown below). 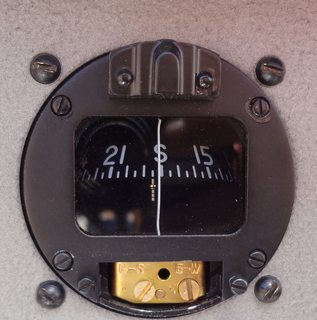 There are several ways to calibrate (or "swing") an aircraft compass - the use of a properly-surveyed compass rose constructed to applicable FAA standards and marked on an airport is one of them, and ensures the compass swing is being performed in an area free of magnetic disturbances which should result in an accurate calibration.

The basic procedure is to taxi the aircraft to the compass rose and align it with the compass directions using a combination of the ground markings and a "gunsight" compass. A full description of the procedure can be found in AC 43-13.1, Chapter 12-37 ("Compass Swing"), but the quick-and-dirty version is: 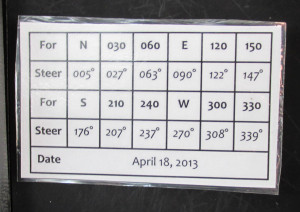 A compass reading within ±10 degrees on each 30-degree heading marker is considered acceptable per AC 43-13, and better results are usually achieved.

The compass swing is typically performed with the engine and electrical accessories (radios) running per AC 43-13. Some mechanics may also perform a second swing with radios off, and include an alternate deviation card for that configuration.

Not the answer you're looking for? Browse other questions tagged airport-markings magnetic-compass or ask your own question.

25
Why are magnetized materials dangerous goods?
38
What is this star shaped symbol on the tarmac?

12
What are the curved centerlines at taxiway intersections for?
9
What's the point of having ILS on runway signs?
6
What do the white dumb-bell signals indicate?
8
Can a runway have a displaced threshold and a closed section in the same area?
7
Why do we undershoot/overshoot with a compass turn?
2
Are magnetic compass acceleration errors due to the southern side of the compass being weighted?
1
What is pendulous suspension in magnetic compass?
4
Do large cities contain enough iron to significantly affect an aircraft's magnetic compass?