Would a 19,000 ft descent in 6 minutes feel noticably different to passengers?

I'm curious to know if you're in a large aircraft descending at that rate would there be a strong sensation of descent for the passengers? Would the plane be angled downwards in a way that wouldn't normally happen or some other sensation not normally experienced when travelling on large civil aircraft?

I appreciate that in this case the masks were down and there might have been noise/wind associated with the actual incident, so clearly it did feel strange to these passengers, but if the descent was done as a test at that rate would it feel strange?

From the physical side, you can not measure / feel if you are at a constant altitude or if you are ascending / descending with constant speed. What you can feel is the change of speed in any direction, and acceleration acting in an unexpected direction. This causes the usual sensations:

Of course, the passengers of that flight did have several sensations. right after the incident, the aircraft for sure has done some unusual movements, plus what the pilots did.

The reference #7 of the Wikipedia article contains this diagram on page 36: 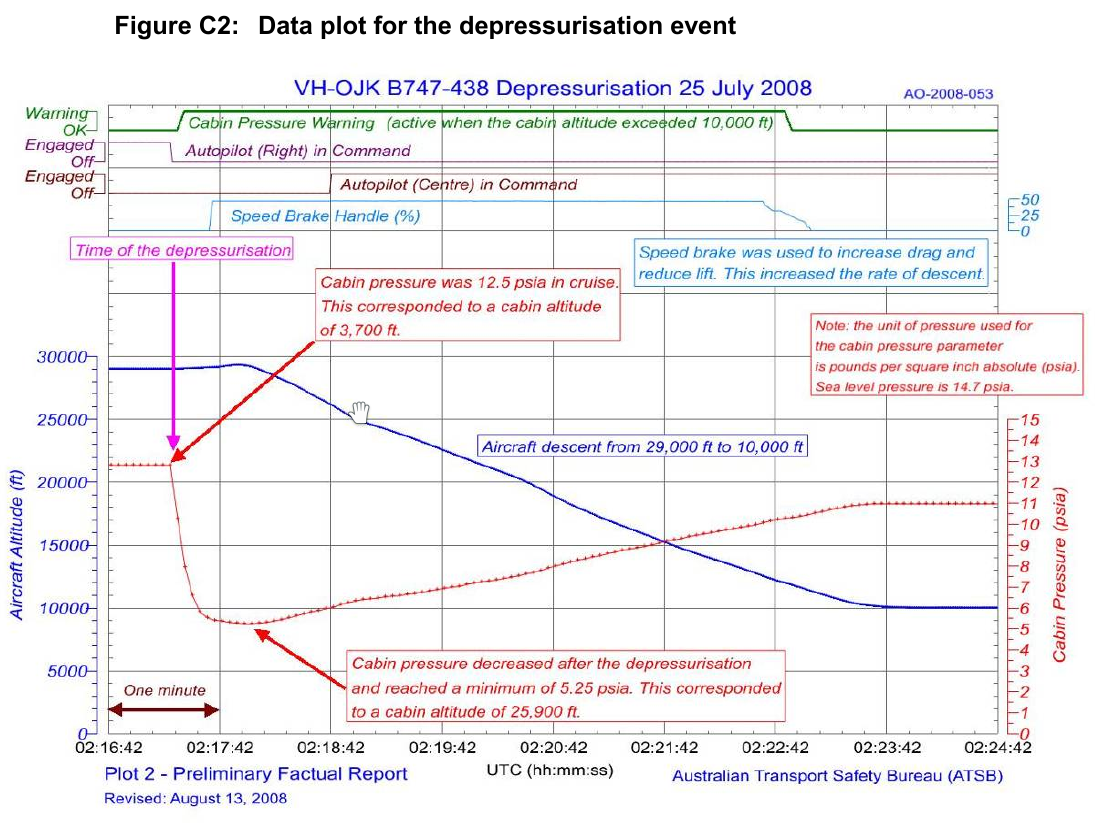 Directly after the incident, the aircraft climbed a little and the speed brakes were deployed (50%) to reduce speed. This was for sure noticeable by the passengers. And I guess the aircraft started to descend faster than usual, so the sensation of "becoming lighter" will have been much stronger/longer than usual. After this, the aircraft descended with a quite constant rate for several minutes. This doesn't cause the feeling of being lighter. Maybe the attitude was unusual which means gravity doesn't push you vertically into the seat.

Later, when the aircraft reached 10,000ft, it accelerated upwards to stop the descent. At this moment, the passengers felt heavier.

(If you have a closer look, the descending part isn't a perfect straight line. This wasn't a smooth ride, but as said, a constant descent rate doesn't cause a sensation)

Of course, this is just about the sensation of acceleration so far. The passengers for sure have noticed the drop in cabin pressure, drop in temperature, more noise and so on.

Yes, it would feel like an elevator descending very quickly. Elevators in small buildings generally descend at around 500ft/min. As an aviator you're taught that this is a comfortable descent rate for almost everyone, and it's what most General Aviation (GA) pilots shoot for. Elevators in most skyscrapers operate up to 2000ft/min. At 2000ft/min a human body reaches roughly one-fifth of its free fall velocity, making a person feel 20% lighter. This is a noticeable and sometimes nauseating effect. The other way that people feel descent rates is through pressure changes, often making ears pop and hurting young children. This isn't as much of a factor for commercial flights as their pressure changes only slightly above 10,000ft MSL.

I mentioned that most GA aircraft ascend/descend around 500/ft min for comfort. Most turbine or commercial aircraft will ascend/descend on instrument clearances that call for rates of 1000ft/min - 1500ft/min.

The pilots in the Qantas case did a great job. They achieved the perfect glide slope for that aircraft and conditions. Gliding that plane for 20 minutes would have resulted in a splashdown for most pilots.

Anectdotally, I am a pilot and have descended at 3000+ ft/min and can tell you it is VERY disconcerting if you're not conditioned for it.

Not the answer you're looking for? Browse other questions tagged airliner emergency boeing-747 or ask your own question.

8
Does the lead in fuel harm passengers?
33
If a typical passenger plane had total failure of all engines mid-flight, is it possible for passengers to survive?
5
What is the probability that passengers can survive a ditching in a 747 at MTOW?
10
What is the descent rate in emergency situations?
47
How should passengers report SOS signal sightings?
2
How to best recover from an excessive descent?
3
Which airliners have carried the most passengers?
2
What is the physical experience of passengers in the cabin during an Emergency Descent?