Why do blimps have fins?

Why do blimps have fins? Can't the two (or so) engines already control direction? 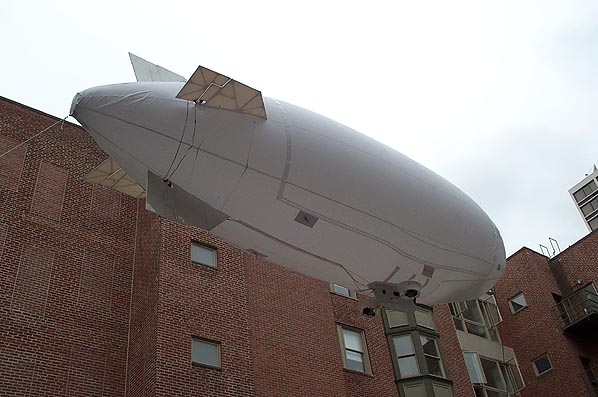 aircraft-design stability balloon
Share
Improve this question
edited May 25 '16 at 10:35

What if the engines fail? In early airships this happened frequently, and many ships limped home on a reduced number of engines.

Note that all airships were both vertically and laterally unstable. The helmsman had to continuously adjust the rudder angle to keep the ship on course. In NACA TN 204, Frank Rizzo concluded that enlarging the fins would be beneficial, and reducing them would be unwise. They were just as large as needed to control the ship, but not sufficiently large to give it static stability.

Static stability in aircraft means any attitude change creates forces which return the craft to its old attitude. In airships, several types of static stability must be observed:

Note that only the first and last type of static stability are ensured, and the first only for special atmospheric conditions! The other three are lacking!

Zeppelin airships used two helmsmen, one for directional and one for pitch control. Due to the size of the ships any movement was very slow, so the task of keeping them on course was easier than it might sound. However, taking any of the fins away or even reducing their size would had made the ships uncontrollable.

Fins, which are also known as stabilizers, increase the horizontal and vertical stability of the blimp.

Without the fins the blimp would porpoise and sway, especially at low speeds.

For example, if the blimp encounters an updraft, the nose would want to rise up, and the tail down. The horizontal stabilizers resist the pitching moment, the same way as the feathers on an arrow.

The fins that are present in the blimps serve two purposes:

Not the answer you're looking for? Browse other questions tagged aircraft-design stability balloon or ask your own question.

18
Why are high-wing aircraft more stable?

68
Why are aircraft tires not pre-spun prior to landing to preserve them?
11
Why don't planes have a reverse propeller as air brakes?
30
Why does the 747 have 4 engines instead of 2?
4
Why don't airships / blimps use frontal stabilizers or thrusters?
4
Is there a formula to calculate how big a ventral fin should be?
50
Why does this 757 have a propeller engine attached to the fuselage?
8
What prevents BFS from becoming unstable when pitching from horizontal to vertical?
1
Why aren't grid fins used as wings for low speed aircraft?