Do most commercial jets have a negative lifting body?

I took a look at some example airfoils and noticed they all seem to have a downward hook at the end. I believe this draws the air downwards, creating a reaction force upwards: lift.

I'm sure this shape has to do with avoiding tail strikes. But is seems to me like it also incurs negative lift. Does the tail draw air upwards, creating a reaction force in the downwards direction and thus negative lift?

You are right, the upsweep at the tailcone allows the pilot to rotate the aircraft during take-off and landing without touching the ground with the rear fuselage. When such a tail strike happens, the aircraft needs to be inspected and repaired, and incorrect repairs after a tail strike have already caused loss of life.

While most Boeing fuselages show some downslope of the upper tailcone contour, this effect is even more pronounced with all Airbus aircraft except the A380. There the upper contour of the tailcone is straight. Military transports with a rear ramp show even more upsweep to keep the heavy ramp short, and most need additional strakes to limit the area of separated flow there at low speed.

This upsweep adds a small downforce and, since it happens away from the c.g., a pitch-up moment. First, at the transition from the cylindrical section to the tailcone you find a strong suction peak at the high curvature region on the lower fuselage. Also, the lower side of the tailcone has a lower pressure than the upper side. Both create the downforce and the pitch-up moment. However, a three-dimensional body of a very low aspect ratio like the fuselage has a very low lift curve slope, so even the strong upsweep creates a small moment when compared to the contribution of the horizontal tail surface.

The local flow at the tail is dominated by the wing wake. To create lift, the wing has to deflect the flow downwards, and this produces a local flow direction at the tailcone which aggravates the situation created by the upsweep. The best indication for the local direction of flow is the rain diverter above the rear fuselage door. See below the rear door of the A320: To create the lowest possible drag, the rain strip is aligned with the local direction of flow during cruise. When flying at lower speed, the downwash is even stronger. 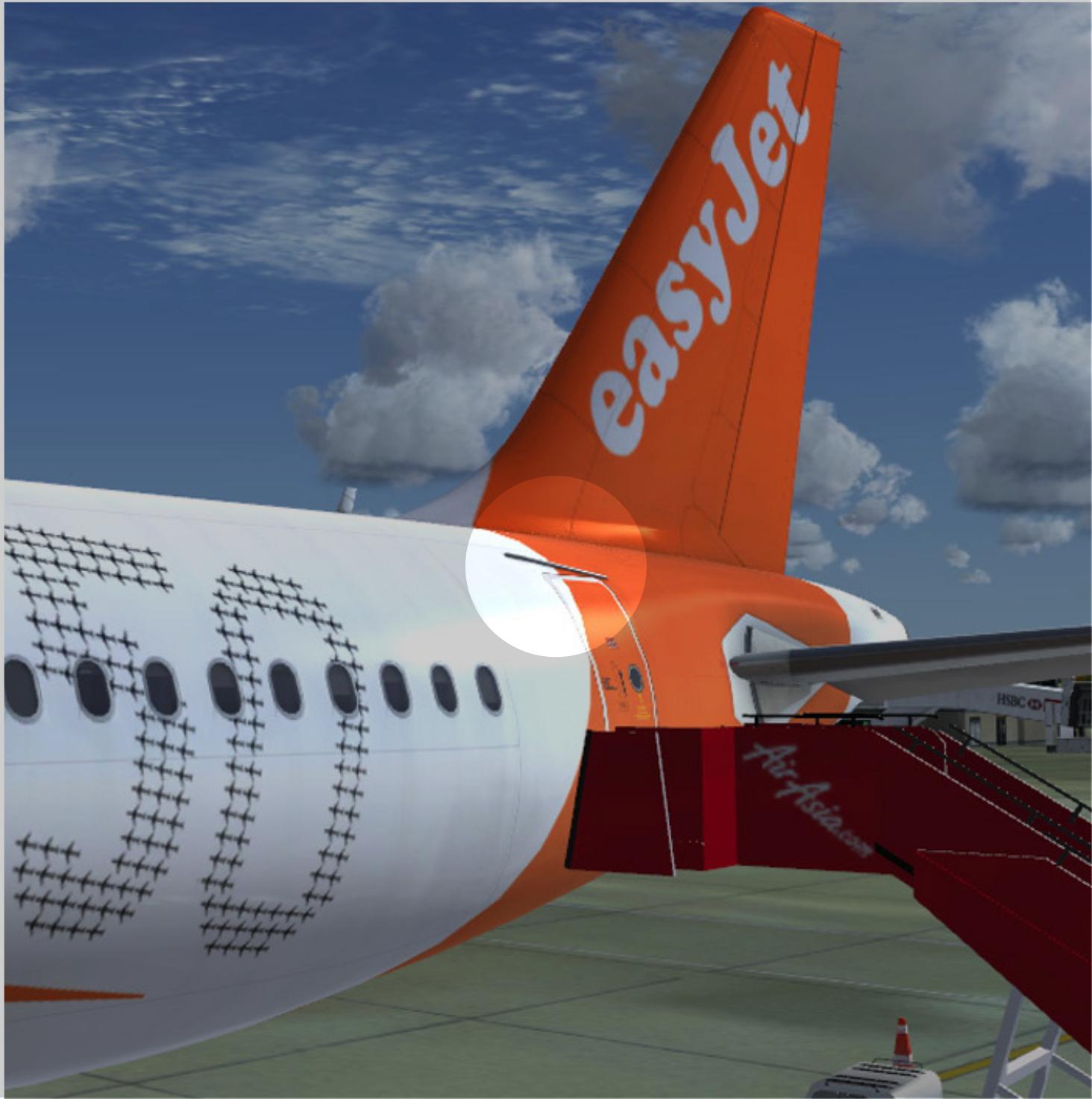 A320 rear fuselage (own work, based on this source)

The term 'jumbo jet' refers specifically to the Boeing 747 (family). A380 is sometimes called superjumbo; the image shows a Boeing 777, which is not a jumbo.

As far as the flow over the fuselage is concerned, the flow does accelerate over the bottom rear fuselage as a result of the shaping; however, the effects of the horizontal stabilizer is predominant in this region and the effect of the fuselage in the net force produced is negligible.

As can be seen from the figure, the fuselage narrows not only from bottom up (to prevent tail strike), but also on the sides (as seen in the top view) to provide a steamlined body. The net result is that the flow is three dimensional- up and towards the centre of symmetry. In some aircraft (usually cargo ones), where the fuselage upsweep is pretty steep for loading and rotation purposes, the resulting crossflow and boundary layer growth can sometimes lead to flow seperation

In case of commercial airliners, the horizontal stabilizer acts as an inverted wing- the result being accelerated flow over the bottom side of the fusealge in the region. This is the most significant reason for the flow in the rear end of the fuselage, resulting in a 'negative' lift over the tail-plane region. However, if the whole fuselage is considered, it provides some positive lift.

The entire tail (including the horizontal stabilizer) designed to have negative lift. So the negative lift on from the tail cone is not a big deal.

This is to create a pitch-up moment to pull the nose up which increases overall lift.

In general a simple tapered body at an angle of attack will net zero lift, with the front pulling up and the back pulling down, resulting in a nose up torque.

When a body generates aerodynamic force, most of that force will be generated very close to the leading edge, as that is where the center of pressure is located. Relatively little is happening at the trailing edge, with respect to the generation of pressure differentials - you do still need to pay attention to the trailing edge in order to ensure that airflow is smooth and doesn't 'separate', but it's not the first place you should be looking to determine if the body, as a whole, will generate lift.

FWIW, a lot of modern aircraft fuselages are designed as lifting bodies, in order to help improve efficiency and performance, so, on the whole, they will be generating some amount of lift throughout most, if not all stages of flight.

18
Why do some airplanes have vertical strakes?
19
How does chord length affect wing design?
10
How does early rotation increase the likelihood of a tail strike at take off?

14
Why do most GA aircraft not have vortex generators?
43
Why do many fighter jets have double vertical stabilizers?
23
Does lift equal weight in a climb?
4
Can a lifting body work at supersonic speeds?
7
Could Mach 1.4 be a better design point for SST?
2
How does the engine produce aerodynamic lift at high angle of attack?
20
Why do non-aerobatic aircraft have a negative G limit?
2
Do horizontal stabilizers on airliners have varying angle of incidence in the span-wise direction (washout or negative twist)?