What is the correct crew procedure for an unreliable airspeed alert?

When the crew receives "airspeed disagree" message on the primary flight displays, they may face some hazardous situation. Is there any procedure, using a table containing pitch, power, altitude and weight, to avoid stall, for example?

As you probably know this is the situation that occurred for AF-447 (Rio-Paris) on June 2009. From the BEA report:

The accident resulted from the following succession of events:

This mistake happened previously. From the same report:

Four crews did not identify the unreliable airspeed situation: in two cases, the crews concluded that there was an inconsistency between the angles of attack; in the two other cases, the crew considered that the speeds were erroneous rather than unreliable.

Then the procedure that should be used in case of unreliable airspeed:

The philosophy for processing the anomaly is described in the “UNRELIABLE AIRSPEED INDICATION / ADR CHECK PROCEDURE” that is in Flight Manual (AFM) and transcribed in the Airbus FCOM and the Air France Operations Manual. 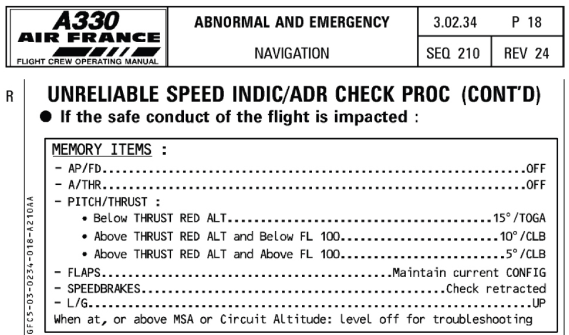 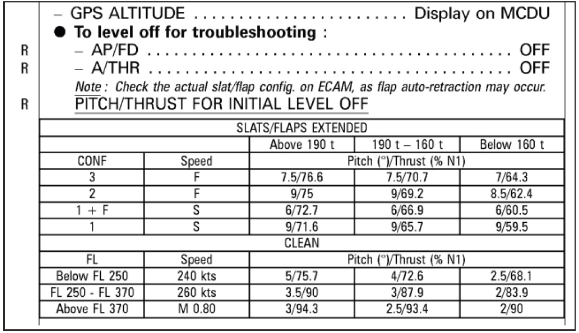 Not the answer you're looking for? Browse other questions tagged safety airline-operations flight-instruments airspeed or ask your own question.

13
What will the pilot do if all the airspeed indicators fail?
5
Do airline pilots use speed stability to cope with unreliable airspeed indications? If not, why not?
1
Could TCAS be used as a backup source for position, attitude or air data?
2
Altimeter disagreement. What's the crew procedure to deal with that?

2
What is the difference between targeted airspeed and selected airspeed?
11
OBI, RMI, HSI… What combination do GA aircraft w/o glass typically have?
5
How can an airliner have low altitude stall recovery?
2
Altimeter disagreement. What's the crew procedure to deal with that?
7
What if an airspeed prescribed by a published procedure isn't safe for a particular aircraft's operations?
9
What prevents a Machmeter from being the standard airspeed indicator?
5
Why do airlines require passengers to return to their allocated seats for landing?
5
Do airline pilots use speed stability to cope with unreliable airspeed indications? If not, why not?
3
How does an airspeed indicator look from the inside?