May a non-instrument pilot legally file IFR as long as he amends and doesn’t accept an instrument clearance?

Say a pilot plans to make a cross country flight along Victor airways, but under VFR. Depending on workload and communication effectiveness along the way, our hero may provide the planned fairly complex route to the FAA at least three times.

This seems like needless frequency congestion. Our hero happens across a suggestion from an ATC specialist that appears to solve the problem for everyone, emphasis in the original.

If you file an IFR flight plan through any system, I will receive it. Make it clear to the first controller you contact that you want to fly your filed route as VFR and give the altitude. It is a very simple amendment I will be happy to make. The only difference on my flight strip is the altitude block that says 60 for IFR or VFR/65 for VFR, and a V in your data block on my radar scope. If you do this, do not accept an IFR clearance. If a controller says cleared to any fix, that is an IFR clearance. Using this method, everything on my end will work smoothly whether you depart a towered or nontowered airport, and this would be the easiest method for the controllers involved. CAVEAT: I do not know if it is legal for a non-IFR rated pilot to file an IFR flight plan even if you don’t accept an IFR clearance.

May a pilot lacking an instrument rating or currency legally do so?

My instrument students, when they get more advanced, file FP with their name, and in remarks say "Training xxxxxx CFII"

That way it is clear. The FAA office investigated one student, dug up his past flight plans, and determined that the way he filed was acceptable. The FAA told me they had reports of him going actual prior to his receiving a rating. I gather if the remark wasn't filed, there would have been more questions.

Having said all that, my recommendation is that you file a VFR flight plan for flight following, and then advise ATC upon check-in. If you are leaving a controlled airport, normally you will advise clearance or ground prior to departure, and then when switching from the tower to departure you will check in with the phrase, "flight following." On a workload permitting basis you will receive the same handling as IFR flights, in general, and there will be no question as to your intent.

Addendum #1 Just because there is no regulation prohibiting behavior, does not mean that an agency such as the FAA will not prosecute. In fact, FAA issued a LOI in 2008, on just this topic, stating that if a pilot were to file an IFR flight plan, without holding an IFR pilot certificate, they would consider that intent to violate 61.3.

Now, whether that resulted in certificate action or caused a letter to be filed in your folder, I cannot say, but I would not want my certificate jeopardized by the poor judgment of filing IFR when one was not authorized to conduct IFR operations.

The 2008 LOI comes a decade or so after the incident I reported above with a student.

I don't see how any responsible person can advocate filing a flight plan which is premised upon false and misleading information. Furthermore, while there is not a specific regulation dealing with this particular lack of judgment, the FAA has made clear, with this specific matter, that would consider such a flight plan filing to be a intent to violate 91.3. Not something that I can see advocating for anyone to do... 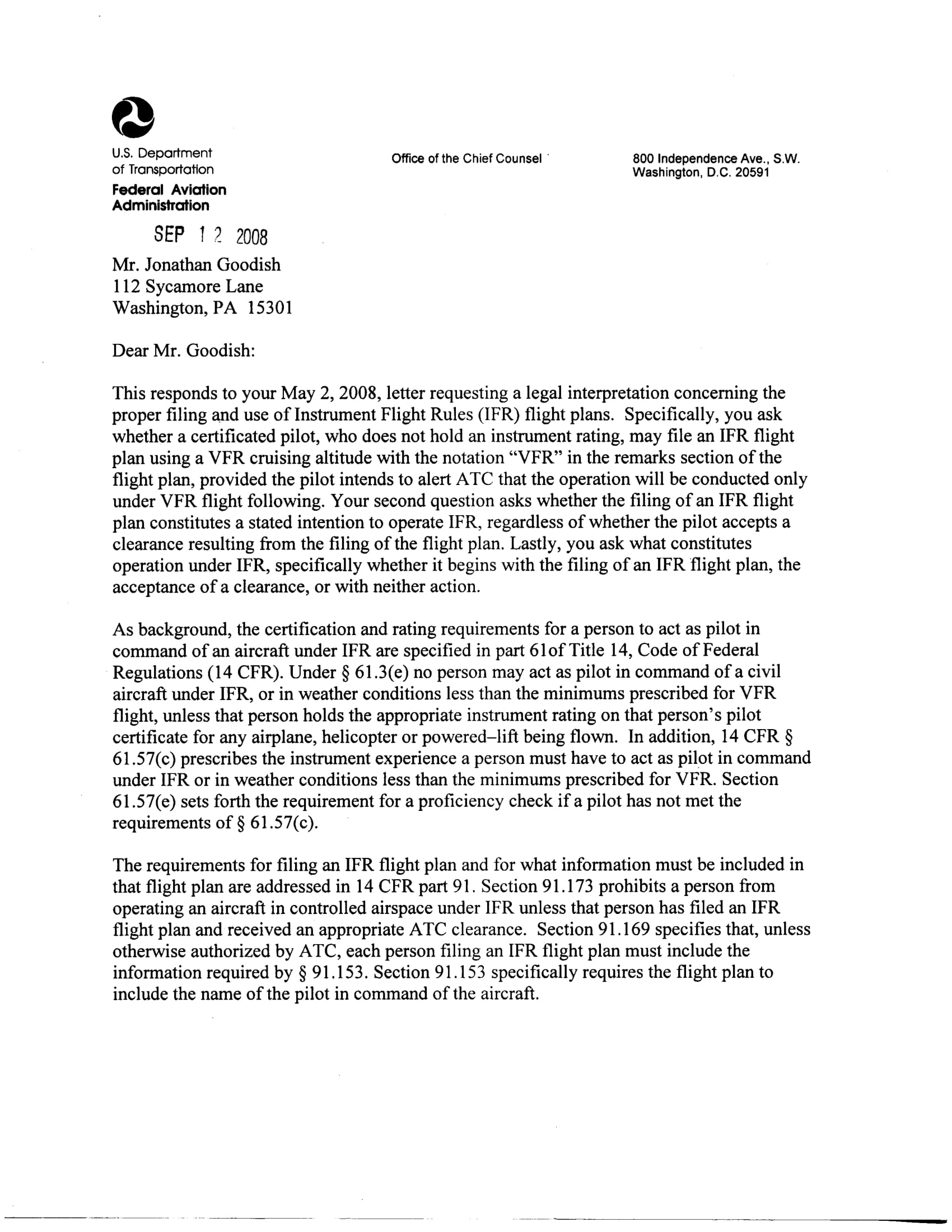 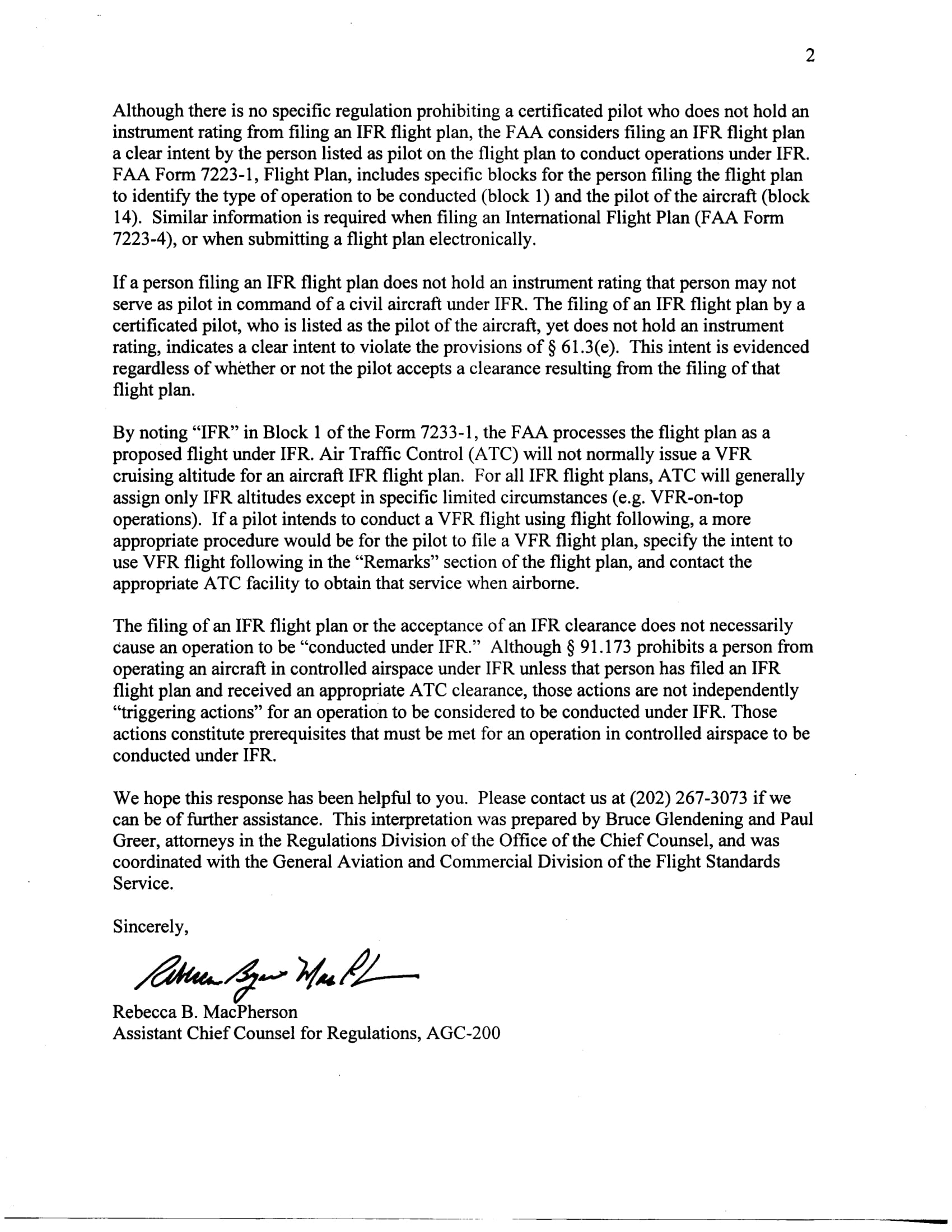 I am not aware of, and have not been able to find any regulation governing the filing of flight plans.

The only applicable rule that I know of in the FAR's is 14 CFR 61.3(e), which says that no pilot may act as PIC under IFR (which you would not be doing in the situation that you describe above):

(e) Instrument rating. No person may act as pilot in command of a civil aircraft under IFR or in weather conditions less than the minimums prescribed for VFR flight unless that person holds:

(1) The appropriate aircraft category, class, type (if required), and instrument rating on that person's pilot certificate for any airplane, helicopter, or powered-lift being flown;

(2) An airline transport pilot certificate with the appropriate aircraft category, class, and type rating (if required) for the aircraft being flown;

(3) For a glider, a pilot certificate with a glider category rating and an airplane instrument rating; or

(4) For an airship, a commercial pilot certificate with a lighter-than-air category rating and airship class rating.

I do remember my instructor having me file IFR flight plans when I was working on my instrument rating (with them as the PIC), and for that matter many airlines and flight planning services often file flight plans on behalf of a pilot. I doubt that all of them have instrument ratings (many aren't even pilots) yet it happens all of the time and I can't find any examples of violations.

As @mongo provides in his answer, the FAA has issued an LOI on this matter, and while my answer stands as far as the legality of having non-certificated people file flight plans, they feel that it would be against the rules to list a non-qualified pilot as the PIC. Therefore, if you are filing on behalf of someone else who is qualified, all should be well, but don't do it if the PIC is not instrument rated.

21
Can you tell ATC you are a "student pilot" when you are not?
7
How should I request flight following when I'm not taking a direct route to my destination?
2
Can a non-IFR rated pilot accept an IFR clearance, provided the operation occurs in VMC only?

16
How do you open and get a IFR clearance while in the air?
15
How should I request an IFR approach at the end of a VFR flight?
20
What is the purpose of VFR-on-top?
10
In what portion a non-GPS approach, can a pilot legally fly with GPS as primary navigational resource?
7
What IFR clearances may a pilot obtain from ATC directly without a pre-filed flight plan with FSS?
3
Can I file IFR DIRECT with a non-WAAS GPS?
2
Does a glider pilot need to file an IFR flight plan to legally fly in cloud in class E airspace in the US?
0
Could a flight ever be considered to be operating under Visual Flight Rules and Instrument Flight Rules at the same time?
2
Can a non-IFR rated pilot accept an IFR clearance, provided the operation occurs in VMC only?