Can the measured thrust of a propeller be greater than the max thrust predicted by Froude's theory?

Can the measured thrust of a propeller be greater than the maximum possible thrust predicted by Froude's Propeller Theory?

Is Froude's theory reliable in practice regarding the upper limit of the thrust delivered by a propeller of diameter, d, turned by an engine that absorbs the power, P?

I get the measured thrust of a 26 inch, 2 blades propeller, higher than what Froude's theory predicts.

The actuator disc theory for Propellers uses some simplifications, which are grouped into a propeller efficiency factor which normally is between 0.7 and 0.9. This accounts for friction and swirl losses, which are both neglected but very real. Also, the theory assumes equal speed over the stream tube and an infinitesimally small hub, both of which increases efficiency over that of real propellers.

If the propeller uses a large duct, Froude's actuator disc theory would be insufficient to explain all thrust. You might want to explain your measurements in more detail to get a better answer.

Can the measured thrust of a propeller be greater than the maximum possible thrust predicted by Froude's Propeller Theory?

It might seem incredible but the answer looks to be: yes it can.

"Stoddard [1977] reports measured values of the thrust which exceed the theoretical upper limit as predicted by the momentum theory by 20% to 50%."

"For the propeller flow the momentum theory underestimates the induced velocity, while for the wind turbine flow this is overestimated. As the induced velocity has a different sign in both flow regimes, the total velocity at the disc $u_d = U_0 + u_i$ is underestimated in all flow states: the mass flow through the rotor is always higher than predicted by the classical momentum theory." 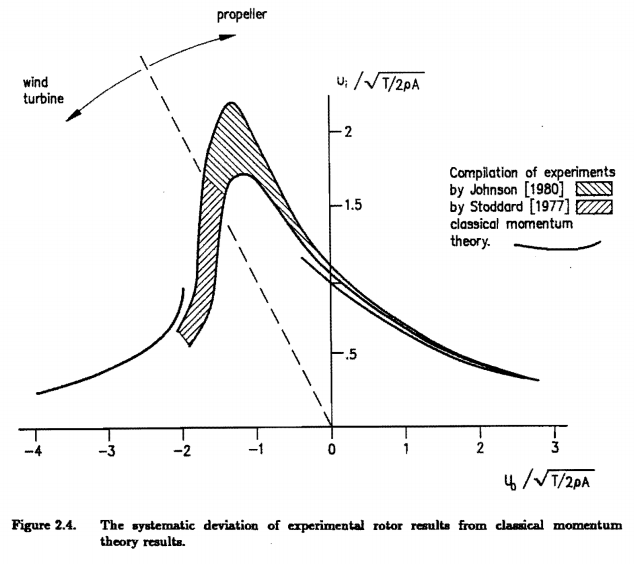 Source: the same paper as above.

15
What is the propeller efficiency, $μ_p$, of modern propellers for light sport aircraft?

4
How did Wilbur Wright create and use the formulas he mentions in his letter to Octave Chanute?
4
Why does this calculation show Gustave Whitehead's propellers were more than 100% efficient?
4
What is the correct formula to calculate propeller efficiency?
1
What is the Efficiency of Cessna-150's Propeller?
6
Do constant maximum lift to drag ratio variable pitch propeller exist?
2
How can I calculate the relationship between propeller pitch and thrust?
0
What is engine power vs propeller thrust relation?
2
Is high propeller pitch inherently inefficient?
1
For a same propeller solidity, what are the tradeoffs between blade activity factor and blade number?