Why are the exhaust pipes design on the Ilyushin Il-2 not very popular?

This is a piece of this image from Wikipedia 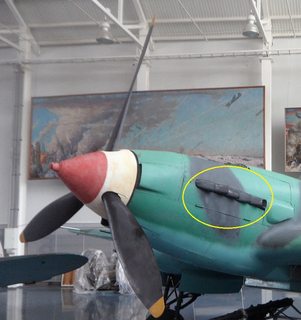 Note the circled region. Movies often show exhaust fumes coming from those pipes when the engine is started. So I assume these are actual exhaust pipes. This design doesn't appear very often, especially in modern piston engine airplanes. Why is this the case?

This engine is about 10 times more powerful than a modern average piston engine. With such power you get some useful thrust from exhaust power directly. This design helps to recover it. With a small SEP, noise and keeping exhaust smoke away from the cabin probably is more important. And it's not true that it's not popular. It's popular with single engine turbines.

It was popular at that time. All the Curtiss P-40 Warhawk, North American P-51 Mustang, Hawker Hurricane, Supermarine Spitfire, Hawker Tempest, Messerschmitt Bf109 and many more had similar.

That kind of exhaust was tied to the engine, a water-cooled 2-line 12-cylinder (V-12) and later some 4-line 24-cylinder (H-24 or X-24) engines. So there was a row of cylinders on each side and each had its own exhaust pipe as short as possible to minimize its resistance.

Since then, anything with more than 6 cylinders was replaced by turbines and all the smaller engines are air-cooled, because in GA aircraft the simplicity of air-cooled engine is more useful than the slightly lower drag of water-cooled one (navy preferred air-cooled even in fighters for the same reason). And air-cooled engines generally have their exhaust pipes lead into the cooling air stream and thus hidden under the cowling.

Not the answer you're looking for? Browse other questions tagged aircraft-design military piston-engine or ask your own question.

13
What are the flaps on the exhaust of military airplanes for?
13
What was the purpose of the “tail prop” on the Ilyushin Il-62 and why was it necessary?
52
Why are fighter pilots seated and not reclined?
16
Why are piston engines so unreliable in airliners?
0
Why should I not use a “lifting tail” on my ultralight design?
13
Why are the guns on the AC-130 not mounted on the underside of the aircraft?
0
Why not use the engine of a model aircraft for other purpose?