Why do aircraft need a vertical tailfin, but birds don't? (and lots of fish do?)

I don't know of any bird that has a vertical tailfin, but apparently aircraft need them for lateral stability. Why is this?

I did realize, however, that most fish have a vertical tailfin, or a vertical dorsal fin, or both. What exactly is going on there? Can't see how marine creatures would need lateral stability at low speeds in a thick liquid (compared to air).

If that second paragraph sounds off-topic, let me put it another way. What is it about the air, as opposed to water, that requires this? They are both fluids. One is thicker/more viscous than the other, which seems to imply that the thicker one would require less lateral stability. Yet it seems to be the opposite. I hope this will be taken as a valid on-topic aerodynamics question.

(P.S. I'm leaving out stuff like the B-2 Spirit because it uses active dynamic adjustments to stabilize. Its form is inherently unstable.)

IMPORTANT EDIT: I should have pointed out the large difference in speed. Birds of course are slow. So were the early Wright flyers. Modern airliners fly much faster, around Mach 0.85. I haven't yet looked up Reynold's Numbers, but it certainly could be the case that the faster ones need lateral stability while the slower one's don't.

1 more clarification: When I say "stability", I'm not exactly talking about yaw control. My impression is, just when the plane is flying perfectly straight, there are pressure fluctuations that will cause slips unless there is a large vertical surface area to balance out those fluctuations. I could be wrong, and ultimately I'm trying to find out why most planes seem to need this large vertical area.

1 more: Here's an example model that seems synonymous: Let's say our airplane achieves yaw with butterfly flaps at wingtips, which are aligned with the center of mass (the flaps and CoM have the same height) so there's no side-effect torques along another axis other than the yaw axis (z axis). Let's assume no backup yaw control is necessary. This craft is meant to cruise at Mach 0.85. Is a vertical fin necessary to achieve passive directional stability about the yaw axis? We should probably consider cross-winds too, even at takeoff/landing.

Not all of them need a fin: 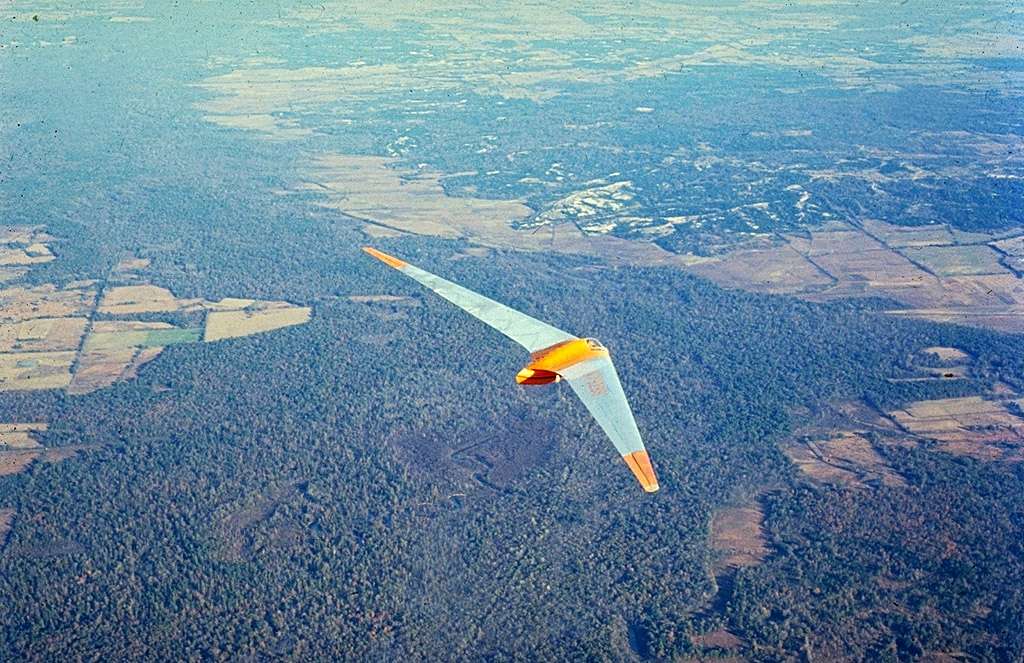 This is the Horten IV, a flying wing glider that did not need a fin (picture source). Instead, it used spoilers at the wingtips to create yawing moments, and the swept wing helped in improving its weak directional stability. It could afford to do so because it was a glider. The second prototype of a jet-powered flying wing, the Horten IX V2, suffered a crash when one engine failed and the pilot could not end the resulting spiral dive.

Birds have two advantages over airplanes which make a fin superfluous:

An extra advantage of birds over older airplane designs lacking a computerized control system is that the bird's brain is wired to adjust the wing on each side subconsciously and continuously. While a fin provides an aircraft with weathervane stability, a bird is inherently indifferent (neither stable nor unstable) and needs continuous tweaking of its wings for directional control.

If a bird wants to control yaw, it simply adjusts its wingtips such that the drag difference between both creates the desired moment. It can do this by reducing wingspan on one side, which also creates a rolling moment for a coordinated turn. Airplanes unfortunately cannot do the same.

Airplanes need positive directional stability because humans cannot adjust the controls continuously - they need to check maps or work the radio, or maybe just want to relax for a moment. Also, multi-engined designs need a stability margin to compensate the asymmetric thrust resulting from a failed engine. With a fin, the mass of the structure behind the center of gravity now needs a compensating mass ahead of it, and the side area of this forward fuselage is de-stabilizing the aircraft in yaw, requiring yet more area at the vertical tail. This is another problem that birds do not face. 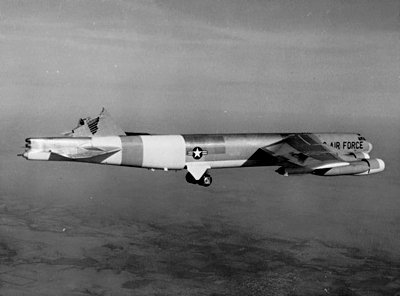 The B-52H 61-023 suffered a structural failure of the fin on January 10, 1964, but managed to limp home with almost no lateral stability left. Had it suffered an additional engine failure, it would had crashed (picture source).

The dorsal fin of fish helps in their propulsion by balancing the areas above and below their vertebral column. By wagging the tail, they create a side force which creates a sideslip condition at the dorsal fin, which in turn produces a correcting side force so the body does not roll while swimming. In this it can be compared to the keel of a sailboat. The hydrodynamic forces on a keel counteract the side force from the sail in crosswind conditions. Its main function is to stabilize the fish from the yawing motion caused by their tail fins, and this stabilization in turn improves the efficiency of the motion of the tail fin.

An additional function is as a roll sensor. Being located at the maximum girth, it gives the best readings of local sideways motion due to roll. This is the main function in marine mammals where the tail fins are horizontally oriented. In fish which have an adipose fin (located aft of the main fin), this fin is most likely their roll sensor.

It is not used for roll control (except as a sensor in a feedback loop), and cannot because it is not adjustable. Roll control is achieved by the adjustable pelvic fins. It also cannot provide roll stability - this would require it to roll the fish back to its initial attitude after a disturbance. All it can do for the roll movement is to dampen it a little and prevent it when the fin is moved sideways.

Not the answer you're looking for? Browse other questions tagged aerodynamics stability vertical-stabilizer or ask your own question.

14
How does wing sweep increase aircraft stability?
9
How to recognize the horizontal winglet in the Horten design, or the experimental glider in this video?
2
Center of Gravity and Center of Lift stability

8
What prevents BFS from becoming unstable when pitching from horizontal to vertical?
2
Would an F-15 or similar stand in be able to continue flight at high speed if it lost its canopy?
7
What costs less energy? Roll or Yaw?
1
How to find the static stall angle of attack for a given airfoil at given Re?
1
Why did the Wright brothers take steps to increase the amount of vertical surface area forward of the CG on some of their aircraft?
2
Why do semitailless swept-winged aircraft, but not delta-winged aircraft, suffer from (primarily) pitch oscillations at high mach?
3
Does dihedral improve roll stability in gusty conditions?
4
Why do the B-2 Spirit's split elevons seem almost always deployed?