For a large commercial plane on landing, does the L/D ratio increase, decrease, or not change much?

Consider a large commercial aircraft coming in for landing. The exact part I'm interested in is the flare (where the aircraft noses up yet does not actually go higher above the ground), with flaps extended, but before any ground effect comes into play.

Compared to normal cruise, does the Lift-to-Drag ratio increase, decrease, or not change much at all?

Increasing angle-of-attack increases both the lift and the drag, but probably not by the same proportions. I'm not really sure which way the curve goes for a typical airfoil.

Also, there's a really harsh complication: the flare also results in the engines pointing upwards too. This means that some "lift" is generated directly by the engines' vertical component of thrust. It's not really lift; a more accurate way to say it is the wings don't need to produce as much lift as before, because the engines do a direct part in helping to counteract gravity.

So that might suggest the L/D in fact decreases, which seems so counter-intuitive.

Actual numbers for the L/D at both stages of flight would be the most rock-solid answer possible. But I wonder if the L/D's cited by the manufacturers are derived from a simple wind-tunnel test (at different AoA and flap configuration) or if they actually take into account the upwards-pointing engines and their typical thrust during flare (which would be best measured as a percentage of aircraft weight at that point, and the mess gets messy).

In the flare you are already in ground effect. Maybe we should compare the final approach with cruise.

The answer is simple: L/D is far worse in approach configuration. The wing buys the increased lifting capacity with a relatively higher drag increase. This is not all bad: If the L/D is too high, a precise landing becomes much harder. Also, some more drag allows you to run the engines above idle, so spooling up for a go-around takes less time. Generally, you want the L/D to be between 5 and 10 for landing. Too much, and the approach becomes too shallow for a precise selection of the touchdown point, and too little and you lose too much energy in the flare, so you decelerate too fast in that final phase where sink speed is reduced.

Compare that to the L/D of modern airliners in cruise, which is around 16 for designs like the Boeing 747 and above 20 for the Boeing 787 or the A350.

You can study this cheaply in gliders. Take one with powerful flaps, like the ASW 20 or the ASH 25. Try to land them with all flaps and spoilers fully extended: You will never get to a smooth touchdown, but drop on the wheel somewhere before the flare is complete. Then try to land them with flaps set for slow flight and no spoilers: You need a loooong runway to do so.

The lift contribution of the engines during the flare is very moderate. They do not run at full power, and even if they did, their combined thrust would be only maybe 30% of the aircraft weight. Since they don't point straight up, but only by about 10°, the vertical component would be only 5% even at full thrust. In reality, they run at a little above idle, and their lift contribution is only 2% at most. 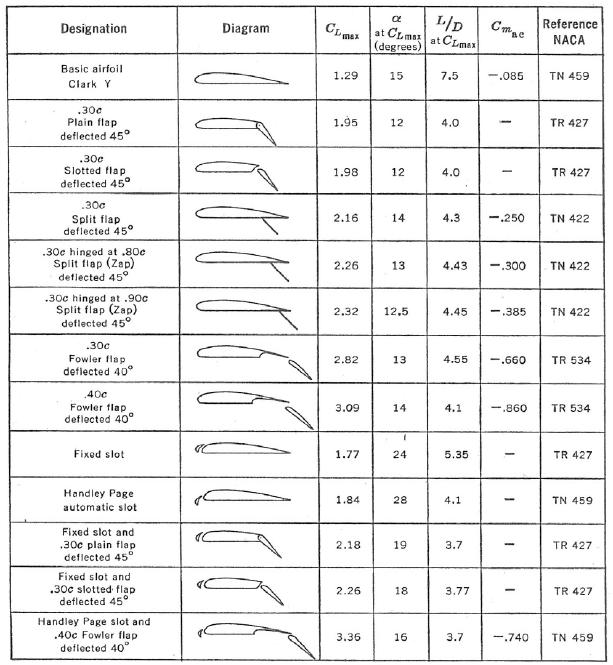 The L/D ratio is usually lesser i.e. worse in landing configuration comapred to cruise. Basically, the high lift devices in the wing trade off some effeciency (L/D) for extra lift. In a sense, this is what you want because you're more concerned with getting more lift at lesser speed at that point.

The following table from NACA Technical Note 1930 gives the change in the L/D ratio in different configurations compared to cruise. 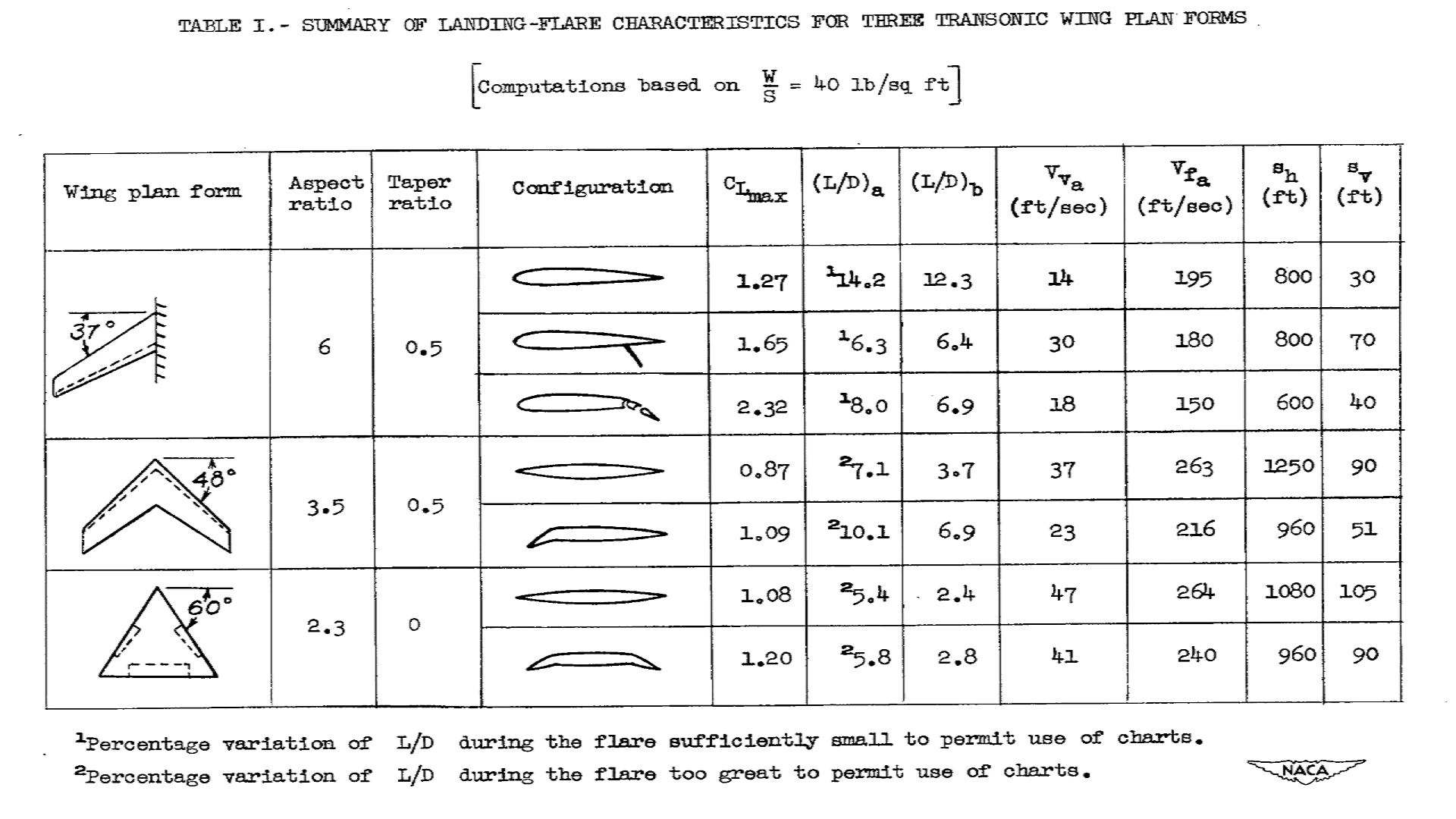 Image from An Analysis of the effect of Lift-Drag ratio and stalling speed on stalling speed and landing flare characteristics by J.Calvin Lovell and Stanley Lipson

NASA used a CV 990 aircraft to carryout low L/D ratio apprach and landing studies, which indicate that under landing conditions, as the flaps are extended, the L/D ratio becomes worse. Data were obtained with 100-percent spoiler (speed-brake) deflection at flap settings of 0$^{\circ}$, 10$^{\circ}$, and 27$^{\circ}$ with 100$^{\circ}$ spoiler (speed brake settings). 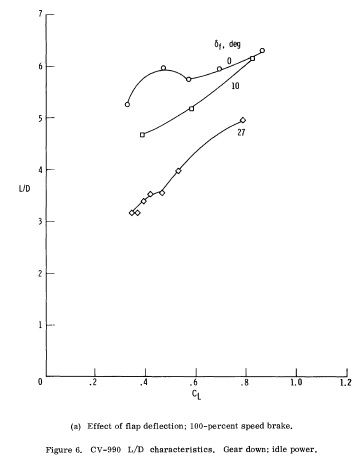 Due to aerodynamic effects, they went on to use 36$^{\circ}$ flaps and 25 percent of spoilers instead. Data from NASA wind tunnel models also indicates that as the flaps are extended, the L/D ratio decreases. 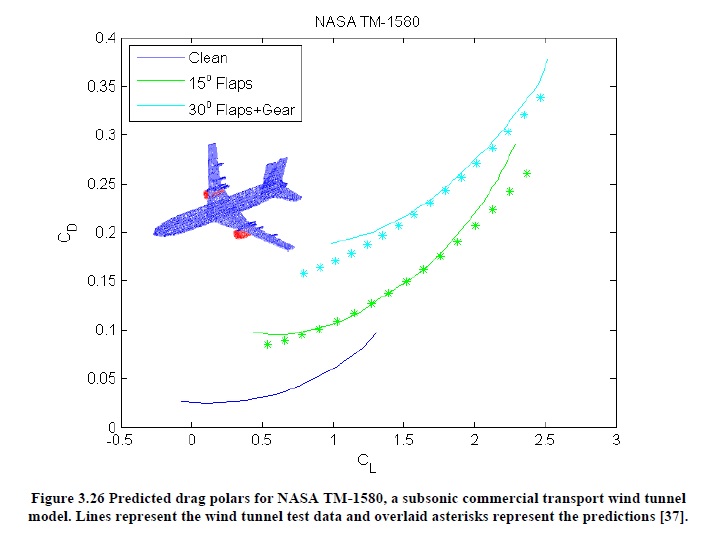 The first reference has data for other Boeng aircraft (727,747 etc) which also indicate that the L/D ratio suffers as the flaps are extended.

In a simple sense, we can think like this- the aircraft is flying close to the maximum L/D ratio (for propeller and large bypass commercial jets) during cruise. Any change from this configuration will most probably result in lesser L/D ratio. This is what happens during landing.

Not the answer you're looking for? Browse other questions tagged aerodynamics commercial-aviation lift drag or ask your own question.

26
Can fighter aircraft glide?
38
How far can airplanes glide?
25
Why are heavy flaps better than just a bigger wing?
15
Why aren't takeoff flaps used all the way up to cruise altitude?
14
How does the Boeing 787 Dreamliner's glide ratio compare to other airliners?
5
What are the aerodynamic differences between the different types of slotted flaps?
3
Why don't aircraft owners put vortex generators on the top of their flaps to extend single flap lift creation past 40 degrees?
3
What effect do slats have on descent rate?

5
How is the climb gradient calculated?
27
Is there any equation to bind velocity, thrust and power?
11
Does the downwash created by induced drag increase or decrease lift?
11
Are aircraft capable of sustained inverted flight at constant altitude?
6
Does drag increase with increasing bypass ratio in turbofan engines?
4
How does the aspect ratio of a wing impact its lift?
95
Are wings any more efficient at creating lift, versus orienting the engine's thrust downwards?
0
What is the relationship between drag and sink rate?
1
How much force is produced by control surfaces?
2
Does increased fineness ratio decrease skin friction drag?