Why is the take off speed and distance reduced by head winds?

Anyone can explain to me is that mean that the distance for take off will be less and also the take off speed will be less? �

You're correct that a headwind will reduce the takeoff roll (takeoff distance). As far as takeoff speed, the airspeed will remain same, but the ground speed will be reduced.

In the simplest sense, an aircraft rotates for takeoff when it generates enough lift (leaving aside other considerations). This is dependent on the airspeed as the lift generated is propotional to the square of airspeed (provided the other factors like wing area and lift coeffecient are kept constant) at a density altitude. As a result, it is the airspeed, not the groundspeed that matters.

If you have some headwind, the effective groundspeed is reduced by the same amount- resulting in reduced takeoff distance. The effect of the wind on landing distance is similar to the takeoff distance. You can see this in the following figure. 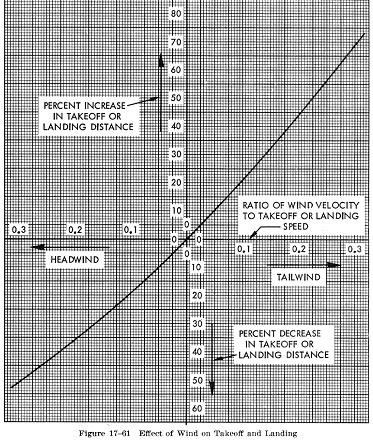 The weather patterns of an area, especially the prevailing winds, are a major factor in determining runway headings. Prevailing winds are defined as the direction from which the winds blow most frequently. Remember that airplanes take off and land into the wind. Let's say that at a given airport the prevailing winds blow in from the west 65% of the year, while 30% of the year the wind blows in from the east, and the remaining 5% coming from the northwest. It would be best then to orient the runway W (27) and E (9). That would mean that approximately 95% of the year airplanes would be landing and taking off into the wind.

The takeoff indicated airspeed - shown on the ASI in the cockpit - will remain the same regardless of the wind. The groundspeed required to takeoff however, is greatly affected by the wind and ambient conditions.

So if the aircraft needs to rotate at 120kt indicated airspeed, with a 20kt headwind the aircraft only needs to accelerate to 100kt of groundspeed, and thus requiring less takeoff distance. But the ASI will still show 120kt at rotation speed.

Yes, the distance will be less in both cases because the amount of time needed to reach the take-off speed is reduced because the necessary groundspeed is reduced (minus the time needed for 20 more knots in your case). The landing is also reduced for the same reason - less time is needed to come to a complete stop because the groundspeed is lower than the airspeed (also minus the time needed to shave off those 20 knots). This is the main reason why runways are built in the prevailing wind directions and aircraft carriers steam into the wind when conducting flight operations.

Not the answer you're looking for? Browse other questions tagged aircraft-design safety aerodynamics general-aviation or ask your own question.

8
Why does condensation form on the wing especially during take-off and landing?
2
Regarding the 1902 Wright glider. Why is the airspeed, Va, calculated adding the ground speed, Vg, and wind speed, Vw?
5
How to calculate required thrust for take-off knowing gross weight and L/D?
13
In light aircraft, non-instrument flight, apply (nearly) full aft elevator before beginning the takeoff roll or at some predetermined speed?
3
Which one needs longer runway of an airplane between take off and landing for a constant weight?
18
Is lowering V1/VR (and runway length required) the only reason for flaps at take off?
5
How changes in Air masses, Air flow direction and intensity affect lift?
2
Why are true and indicated airspeed different?
10
Effect of heat and humidity on take off, descent, climb, and cruise