Is it possible to take off on an elevated short field by "falling"?

I understand this may be a dumb question to ask, but - in the opening sequence of Golden Eye - James Bond chases after a plane that has rolled off the side of a cliff in his motorcycle, and then somehow (movie magic) climbs into it and pilots it away.

I am not asking about the physics of the motorcycle stunt - except keeping it to the aircraft part:

Is this something that can happen in real life - that is, an elevated airfield so short, that the plane has to "fall" to obtain enough speed to gain lift?

Has something like this ever been attempted, even if simply as an exercise in flight dynamics?

Is it theoretically possible? Sure.
Is it realistic or probable? Absolutely not.

If there is not enough space for the airplane to accelerate to takeoff speed it will be effectively stalled when it reaches the end of the ground. That means that as soon as it runs out of ground it effectively becomes a ballistic projectile: it keeps moving forward, but it also starts to fall because of gravity. You can see this in the Goldeneye clip - the plane adopts a nose-down attitude shortly after it leaves the ground.

Eventually, given enough time, the airplane will reach a flyable airspeed (between gravity accelerating it down and its thrust propelling it forward). How far it needs to fall before that happens depends on a number of factors, but if the ground is sloping downward at an angle such that the aircraft's ballistic trajectory does not intersect the ground before it can reach flying speed you could theoretically make such a takeoff.
The obvious downside is that if things don't go perfectly in the attempt you will intersect the ground in uncontrolled flight ("crash").

In the Goldeneye scenario the aircraft is already in a fairly extreme dive when Bond manages to get aboard, so for our intrepid secret agent it's not so much a matter of getting the aircraft to a flying speed (it's probably there already) but rather of recovering from the dive before hitting the ground and without over-stressing the airframe and causing parts to break off.

I'm taking that you mean taking off (for the want of a better word) when the runway is unavailable- trade altitude for gaining speed and get back to controlled flight. This is certainly possible but not recommended as it puts too much premium on pilot skill and luck.

There are videos in the internet which shows exactly this being done, but whether anyone would want to try this is questionable. Atleast this shows that as long as the aircraft is kept clear of the ground below for a reasonable amount of time and the aircraft does not stall, the aircraft could be flown off the cliff.

Another way of looking at this is to consider the experiments carried out in 1930s with airships and 1950s with large bombers, which launced aircraft from an altitude.

The McDonnel Douglass XF 85 Goblin was purpose built to be carried and launched from bombers; the launches were successful, the trouble was with the retrieval of the aircraft. The advent of the air-to-air refueling put and end to the experiments.

Yes, an airplane can be launched by gravity acceleration, whether by a short takeoff run, or actual free fall. As other answers have indicated, there are many instances of this taking place from short runways or hillsides.

An obscure application of this ability is found in the curious history of the Curtiss Sparrowhawk, a "parasite fighter" that launched from US Navy airships. The aircraft was stored in the airship, which was a sort of flying aircraft carrier. To launch, the Sparrowhawk was lowered below the airship by the hook above the wings, the engine was powered up, and the aircraft was released to fall away and gain airspeed. 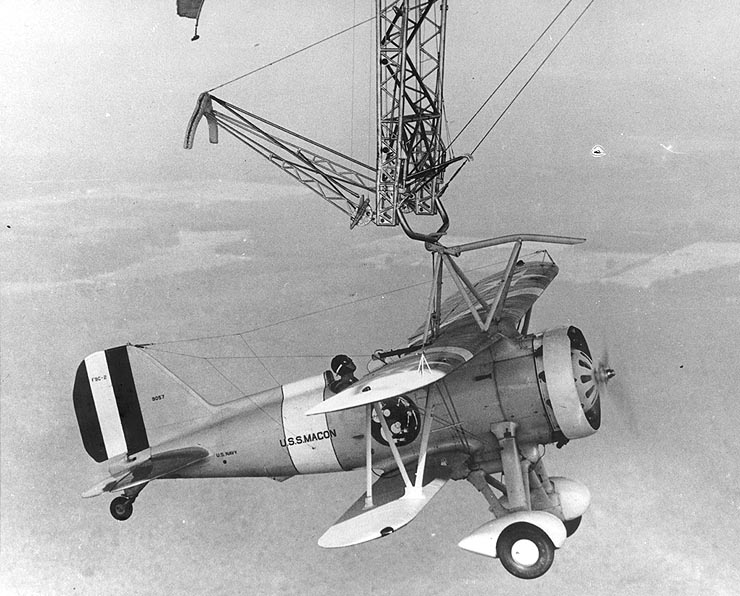 Interestingly, the Sparrowhawk used the launch mechanism for retrieval into the airship. Read more about the Curtiss F9C Sparrowhawk, and the two airships that carried it, the USS Akron and the USS Macon on their Wikipedia pages.

It sure is possible, and sure has happened!

Check out this video. Looks like a whole lot of fun. As long as there is enough forward trajectory to clear the edge, and enough room before the ground, it can be done. I wouldn't like your chances of pulling it off in a larger aircraft however, and the piloting technique would need to be precise.

One of the greatest books on aviation ever written, Fate is the Hunter by Ernest K. Gann, has a story about departing Africa fully loaded with fuel off of a river in a seaplane, and they couldn't get airbore before the river turned into a waterfall. When they reached the waterfall, they lowered the nose until they reached flying airspeed, and flew away. It wasn't planned, but they made it anyway. So, yes, it is possible. And run, don't walk, to your favorite bookstore and buy this book. I read it every year.

I'm surprised to see Courchevel Altiport being only mentioned in comments in this question. While this is not exactly a free fall, the middle part of the runway has a significant slope (18%), which contributes toward accelerating the planes taking off (as well as slowing down the landing planes). 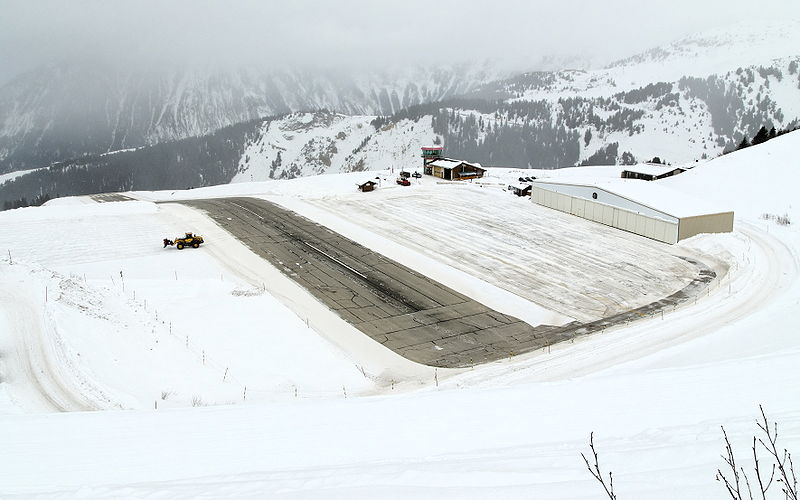 One similarity with a free fall is that once the plane reaches the slope, the pilot cannot do RTO anymore, because of a short remaining distance and additional acceleration from the slope:

And that’s where we come to the ‘dilemma’ on this runway. Once the DASH 7 has started moving there, there’s no turning back: it just has to take off. Aborting a take-off on a runway this steep is absolutely unthinkable. We could no longer bring the aircraft to a standstill, and I don’t even want to think about the consequences of that…

There are already a number of good answers and examples that, while unprobable (in the sense of "requiring a specific combination of factors") and dangerous in most of the cases, it is definitely really possible (since it happened).

At the beginning of commercial aviation, unreliable planes carried paper mail (a.k.a. post, letters) in daredevil conditions. In between 1927 and 1929, Jean Mermoz was trying to open a route across the Andes. He and his mechanic stranded at high altitude after an incident, rode into a precipice to gain enough speed to fly again. This has been widely documented for decades.

He rode an updraft that carried the plane through a high mountain pass, but then a downdraft slammed the aircraft onto a plateau at 12,000 feet. Though the small machine suffered only mild damage and was still airworthy, there wasn’t enough take-off run available on the plateau. Mermoz cleared a rough path to the edge of the precipice and they removed whatever they could from the aircraft. They strapped themselves in and Mermoz just rolled off the mountain hoping to gain enough flying speed before hitting the ground. They succeeded; otherwise it would have been certain death.

Mermoz next tackled shortening the Argentina-to-Chile route; pilots had to make a thousand-mile detour to get around the Andes. With mechanic Alexandre Collenot, Mermoz set out in a Latécoère 25 monoplane and found an updraft that carried them through a mountain pass, but a downdraft smashed the aircraft onto a plateau at 12,000 feet. After determining that they could not hike out, Mermoz cleared a crude path to the edge of the precipice and removed from the aircraft anything that wasn’t bolted down. He and Collenot strapped themselves in, and Mermoz got the airplane rolling down the path.

In effect, they dove off the mountain, and Mermoz pointed the nose straight down, hoping to gain flying speed. Again, luck was with him.

voretaq7's answer seems to explain quite well what's going on but I suggest taking a look at the 'bungee launching' of gliders/sailplanes. Effectively the aircraft is initially accelerated by an elastic band, and then gains airspeed by falling down from a hill, almost exactly as you ask. It is still is used at 2 places in the UK occasionally. The hill must be 'right' for it to work.

So yes, this does actually happen in real life, but not with 'normal' (powered) aircraft.

Some British aircraft carriers have ski-jumps at the end of their flight decks. These allow aircraft that are rolling forward already (but too slow to sustain flight) to convert some of their forward velocity into vertical speed, in effect "lobbing" them into the air.

Obviously if their engines were not providing thrust, they would soon get wet, but it would take longer to hit the water than if they had just rolled off a flat deck. This gives the aircraft extra time to accelerate to the speed required to sustain flight, and allows a shorter flight deck (so smaller ship, which means cheaper)

Depending on your frame of reference, you could say that the aircraft "fall" of the end of the ski jump. They certainly have a negative vertical acceleration for a small amount of time, until the airspeed is high enough for the wings to totally counter gravity.

The book Hitler's Raid to Save Mussolini by Greg Annussek (page 6, second to last paragraph) discusses the rescue of Mussolini; they used a 200 meter runup then off a cliff in a Storch.

I see no reason why it should not be possible if you have enough speed to clear the cliff and keep the nose pointed into the relative wind. In this 0 g maneuver the wings will not stall as long as no lift is being generated. If there is sufficient clearance to gain enough speed to reach a flyable speed and pull up before hitting the ground, it should be ok (not considering practicality).

Make a good paper airplane and drop it forward-end facing down, it will fly without a problem (if you made the plane properly)

Not the answer you're looking for? Browse other questions tagged takeoff runways or ask your own question.

18
How are take-off segments defined?
7
Why was this Twin-Otter Take-Off unsuccessful?
19
What is a take off roll?
16
Does adding flaps during ground roll perform better in short-field takeoff?
2
Is there a formula to calculate take off runway distance for commercial planes?
4
Where do LAX commercial cargo planes land/take off?
9
What are the disadvantages for using short-field take-off technique?
0
Launch control equivalent while take-off
8
How could I minimize the take off fuel consumption?