How is the induced drag calculated for a wing with elliptical planform ? Is this wing shape the most efficient ?

Induced drag is caused by the downward deflection of the air streaming around the wing. The resulting aerodynamic force is tilted backwards by half the deflection angle, and the air flows off the wing with an added vertical speed component, producing downwash. Increasing the downwash angle means increasing both lift and the backward tilt, so the induced drag goes up with the square of the lift produced.

If you want to minimize induced drag for a given lift, this quadratic dependence means the optimum is reached when the downwash angle is constant over span.

The elliptical, untwisted wing has the same angle of attack and the same lift coefficient over span, and produces the desired constant downwash angle. To simplify things, let's assume the wing is just acting on the air with the density $\rho$ flowing with the speed $v$ through a circle with a diameter equal to the span $b$ of the wing. If we just look at this stream tube, the mass flow is $$\frac{dm}{dt} = \frac{b^2}{4}\cdot\pi\cdot\rho\cdot v$$

For small $\alpha_w$s the arcus tangens can be neglected, and we get this familiar looking equation for the backwards-pointing component of the reaction force: $$c_{Di} = \frac{c_L^2}{\pi\cdot AR}$$

If the circulation over span has an elliptic distribution, the local change in circulation times the local amount of circulation is constant, and the induced drag $c_{Di}$ is at it's minimum. If this would be different, a higher local $v_z$ causes a quadratic increase in local induced drag, so the whole wing will create it's lift less efficiently.

Is this wing shape the most efficient ?

Only if you ask an aerodynamicist would the answer be yes. An elliptic wing will give you the best ratio of lift to drag, which clearly is one way to express efficiency.

In reality, the wing has to lift itself plus a payload, but only lifting the payload should be considered when formulating efficiency. Therefore, pure lift/drag optimization is too narrow. What should count is the best ratio of lift minus wing weight relative to drag. R. T. Jones wrote a NACA Technical Note back in 1950 in which he looked at this problem analytically. Wing weight goes up when much lift is created near the tips, because this lift will cause a disproportional root bending moment, and the wing spar which has to carry this bending moment is a significant part of the wing structure. Therefore, reducing lift at the tips and adding more lift at the root will create a lighter wing for a modest drag increase, resulting in an overall optimum for an almost triangular lift distribution. When compared to an elliptical wing planform, the total wing span of such an optimized wing is bigger for the same overall drag, but this wing will weigh less. 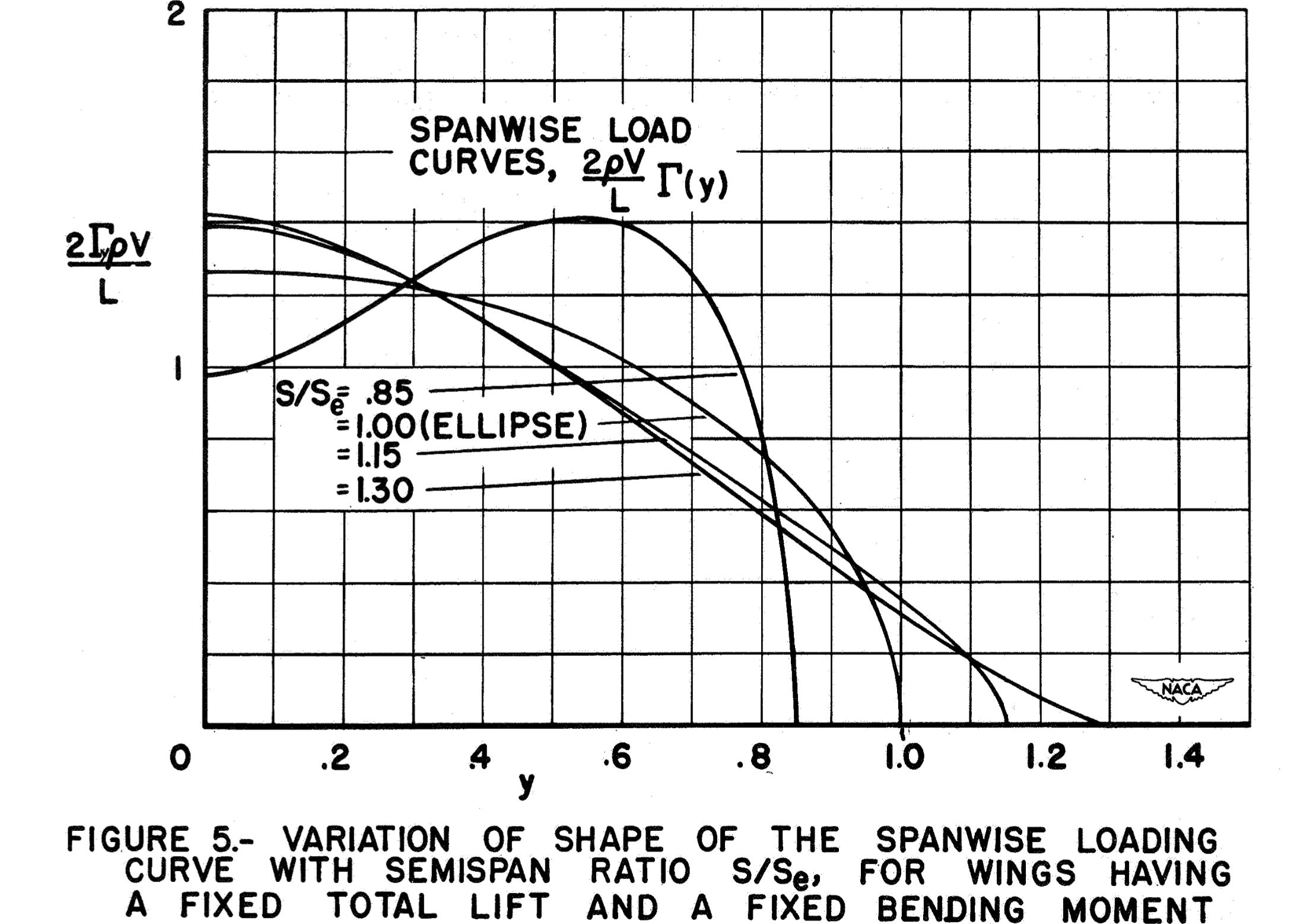 But this is too easy. Scaling laws must be considered in addition. You know that elephants have much more massive legs relative to their body size than antelopes (or even ants, for an even more drastic comparison), since body mass scales with the cube of linear dimension while structural strength scales only with the square of linear dimension. This means that wing spar weight will be proportionally higher for larger aircraft.

where $C_{L}$ is the lift coefficient and $A$ is the aspect ratio.

Elliptical loading produces the minimum induced drag according to the lifting line theory, when only the span and lift are considered. If other considerations come into play (like wing bending moment), the most efficient shape varies.

As for why the best distribution is elliptic, the equations can be readily derived from lifting line theory; basically this is because the downwash is constant along the span. A good way of reasoning why this is so is given in The Minimum Induced Drag of Airfoils by Max Munk, NACA Report No. 121.

If the distribution is the best one, the drag cannot be decreased or increased by transferring one lifting element from its old position to some new position. Now, the share of one element in the drag is composed of two parts. It takes a share in producing a downwash in neighborhood of other lifting elements and, in consequence, a change in their drag. It has itself a drag, being situated in the downwash produced by the other elements.

... In case of the lifting straight line, the two downwashes, each produced by one element in the neighborhood of the other, are equal. For this reason, the two drags of the two elements each produced by the other are equal too, and hence the two parts of the entire drag of the wings due to one element. ... hence, the entire drag due to one element is unchanged when the element is transferred from one situation to a new one of the same downwash, and the distribution is best only if the downwash is constant over the whole wing.

For this reason, when only the span and lift are considered, the elliptical loading gives the minimum induced drag as the downwash is constant over the wing. When the constraints are modified, other distributions and wing shapes become more efficient. For example, from On the Minimum Induced Drag of Wings by A. H. Bowers:

Constrained only by span and lift

Constrained by lift and bending moment

38
How does an aircraft form wake turbulence?
15
What is the propeller efficiency, $μ_p$, of modern propellers for light sport aircraft?
9
How to recognize the horizontal winglet in the Horten design, or the experimental glider in this video?
10
Why do wall-to-wall airfoils in wind tunnels produce no (or infinitesimal) downwash?
9
For the elliptical wing, which property is actually elliptically distributed?
6
Why is induced drag less on a high span wing?
12
Why do the outer parts of wings generate less lift?
8
Is the low air pressure on top of the wing the major contributor to lift?
4
Explained intuitively, why does aspect ratio affect induced drag?
8
Why does the elliptical wing have the lowest drag?
See more linked questions