Why are piston engines for aircraft rarely diesel powered?

The reason I see mentioned is their poorer power-to-weight ratios. (e.g. What are the advantages/disadvantages of diesel/Jet A-1 piston engine?)

I knew this was true in the past but is it true even today? Does anyone have values comparing the power-to-weight rations of typical diesel vs gasoline engines, say for automotive use?

50 years ago diesel engines for automobiles were uncommon too but in the last decade they have been steadily making headway in the car market. Do the same developments translate to the aircraft engine selection too?

Other than weight, are there any other disadvantages of diesel?

You are right, there are few modern aerodiesels around - so few in fact that we can go through the brief list one by one:

What has held the diesels back for so long?

To be fair, a modern gasoline engine will also benefit from fuel injection, a gearbox and turbocharging, and Zoche initially did not use an electric system, relying instead on pressurized air for starting the engine (a pressure bottle loses much less of its stored energy when cooled to -20° than a battery, after all), but the practical aerodiesels are a lot more complex than the engines they are meant to replace, creating an obvious reliability disadvantage. 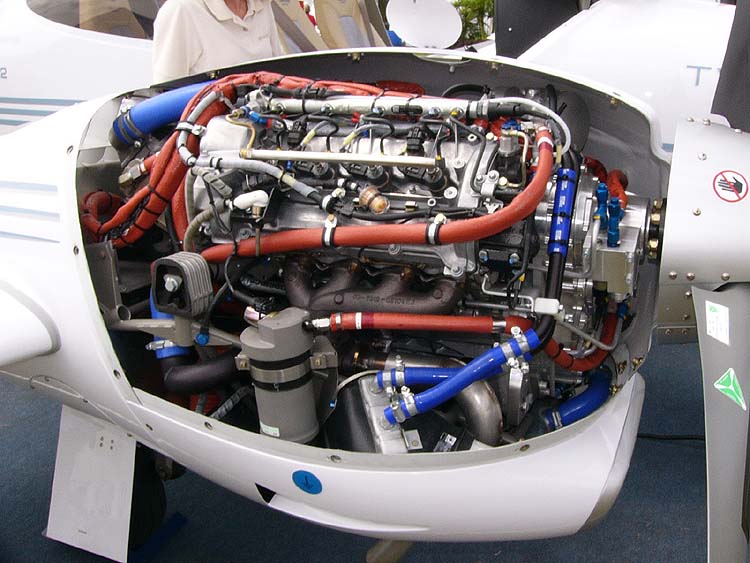 Although this has partially been covered in this question, it's different enough to warrant an answer.

In the vast majority of light piston aircraft the benefits of diesel are way lower than the costs in involved.

Diesel engines are heavy, this is because the diesel cycle relies on cylinder pressure rather than a spark to ignite the fuel-air mix. This means that diesel engine blocks have to be at least part steel, as aluminum is not strong enough to contain the pressures. All the aero-diesel engines I have read about have a hybrid steel-aluminum block, which is harder and more expensive to manufacture. The weight of the engine has the following impact on costs:

So not only are the engines more expensive in the first place, fitting them is very expensive as well. Unless your airplane is going to fly a lot it would take decades to recoup the costs. Many of the other downsides (lack of Jet A1 fuel at many GA airfields, lack of engineering support for the engines, etc) would go away if it was cheaper to get a diesel installed.

The issue with weight to HP has been surpassed by many manufacturers already. There are 200hp diesel engines in the market, that are smaller and weigh less than its counterparts from Lycoming or continental. Actually, their frontal dimension is smaller than avgas engines, providing for the possibility of smaller and more aerodynamic cowlings resulting in less weight and higher performance. This engine can further be enhanced by using MT propellers that are lighter than traditional propellers and provide better climbing performance.

The cost of the Diesel engine will go down as did computers with more volume. If we consider that jet fuel can be 50% to 60% cheaper and some engines are 30% to 40% more efficient than avgas engines, it merits for new airplanes to consider the use of diesel and abandon the close to the 100-year obsolete technology of the avgas engines.

Furthermore, diesel engines lend them self for future use of alternate fuels and biodiesel that could be produced cheaper than biofuel for avgas-burning engines.

Until the electric technology for aviation does not reach a point of balance between speed and range, I consider that the future for us real pilots that have to cope with ever increasing costs of flying would benefit from lower operating costs if Diesel airplane would be available.

Not the answer you're looking for? Browse other questions tagged engine fuel piston-engine or ask your own question.

2
Since jet fuel is cheaper, why do pistons still use av-gas?
0
Alternate for jet fuel
45
What are some of the differences between piston engines used in aircraft and automobiles?
15
What are the advantages/disadvantages of diesel/Jet A-1 piston engine?
3
Why does the NASA GL-10 Greased Lightning run on diesel?
4
Which aircraft/powerplant manufacturers use metric hardware?