How can cargo be jettisoned from a C-124 in flight?

I was reading about a C-124 that was carrying three nuclear weapons over the Atlantic, and developed engine trouble. The article said that two of the weapons were jettisoned into the ocean for safety reasons. I was wondering how you can drop something from a C-124 in flight? Unless they were small enough to push out the back side doors. This happened on July 28, 1957.

The C-124 had a opening in the rear, through which cargo (or paratroopers) could be dropped. From globalsecurity.org:

The C-124 was also used for airdrops. ... In the back of the plane, the underneath of the airplane had elevator doors that opened up and the crew could drop cargo out, or paratroopers could jump out.

Here is an image of the elevator doors in open position 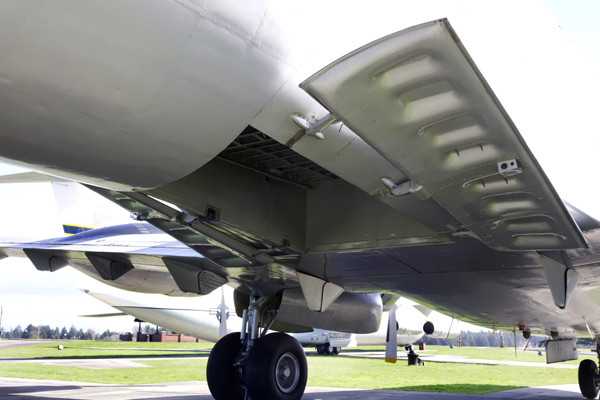 The rear elevator opening of the Douglas C-124 Globemaster II where an elevator platform could be lowered or raised for bulk cargo operations (often the platform was removed so an interior hoist could directly move cargo) — photo by Joseph May; image from travelforaircraft.wordpress.com

Here is a C-124 using that door for an airdrop, presumably in Antarctica (I've put the image as I came across; I'm pretty sure that it's rotated) 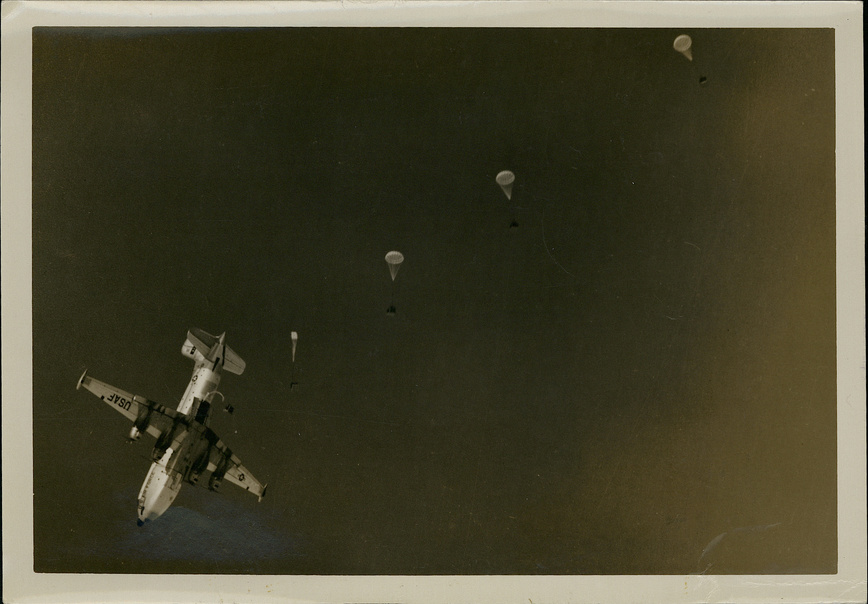 The crew must've used the rear door rather than the front one for jettisoning the nuclear weapon. The text of the official report reads:

The C-124 aircraft was en route from Dover AFB, Delaware, when a loss of power from the number one and number two engines was experienced. Maximum power was applied to the remaining engines, but level flight could not be maintained. At this point, the decision was made to jettison cargo in the interest of safety of the crew and aircraft. Three weapons and one nuclear capsule were aboard the aircraft, and nuclear components had not been installed in the weapons. The first weapon was jettisoned at 4,500 feet altitude. The second weapon was jettisoned at approximately 2,500 feet altitude.

With the difficulties the crew was experiencing in keeping the aircraft level, it would only be logical that the rear doors were used, not the front.

As a loadmaster on c124s in the 50s the the cargo elevator platform can be jettisoned and cargo can be jettisoned out the opening. The flight manual tells you the clamshell front loading door will never be operated in flight. It has 4 safety large pins installed all the time unless it is in use to load or offload on the ground. I know as I have over 5000 flight hours as a loadmaster on c124s.

If you have oversized items, they go down with you and the aircraft. We did carry parachutes if we needed them.

The flight Manuel tells you the clamshell door will never be operated inflight it has 4 safety large pins installed all the time unless it is in use to load or offload on the ground. I know as I have over 5000 flight hours as a LOADMASTER on c124s.

The front doors on the C-124 could NEVER be opened in flight. Doing so would cause catastrophic failure. The door hinges could not take the wind and would certainly take out the two inboard props, and probably the aircraft vertical and/or horizontal stabilizers. If some miracle occurred and the doors flew off without hitting anything else, the drag of that huge open maw would be so great that the only way to fly would be at maximum power, and in a very steep dive. In addition, the skin of this airplane is riveted for outside pressure, not inside pressure. The wind pressure of that 200+ mph wind inside the aircraft would blow out the skin, leaving, at best, an aircraft skeleton. And since the aircraft was semi-monocoque construction, relying on the aircraft skin for a significant part of the integrity of the fuselage, the loss of the skin would certainly cause the fuselage to break in two.

Paratroops exited via two troop doors on the side of the aircraft toward the rear. There were also two troop doors above these, for troop drops using the upper troop floor platforms. However, I have never dropped airborne from the second level, and don't think that it was ever done except, perhaps, in tests or shows. I was with the last Troop Carrier Squadron in MATS/MAC, the 63rd Troop Carrier Wing, which folded Hunter AFB, Savannah, GA, and its use of the C-124, in 1967.

We carried the upper deck floors on most missions except when the mission order called for their removal. However, when Viet Nam got hot and heavy, I seem to remember not carrying them any more from about 1966 until I left the 61s ATW when they folded their C-124 mission in late 1969. Not carrying the decks yielded a couple of thousand pounds more useful load, and a little bit more room for cargo.

We jettisoned the cargo elevator (with pallets) in flight over the North Atlantic. On another flight while coming in to Sondestrom AFB in Greenland, the upper hinge on the right front clamshell door (viewed from inside while airborne) sheared in flight. We already had 1 engine shut down due to malfunction. I remember loosing altitude at a controlled rate wondering if we would make the coast, and if so, would the door completely fail on impact of landing and foul the main landing gear. We made it to Sondestrom and landed without further incident, but I also remember the pilot stopping on the runway short of smoking the tires as the fire-equipment raced up and surrounded us. We deplaned on the runway.

If you are desperate enough, even front cargo doors can be opened in flight. 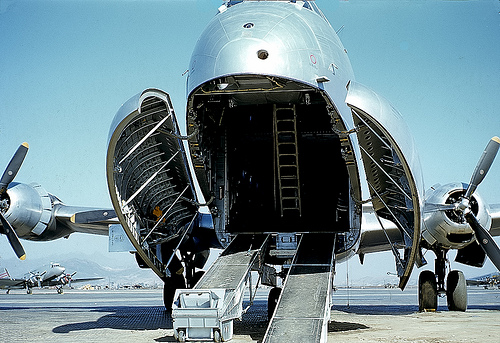 Note that the hinge line is almost in flight direction. When flying slowly, the aerodynamic loads are small enough to crack the doors open. Actually, their shape will result in a suction force over most of their length, so the hard part is closing them again.

Once the doors are slightly open, the load can be pushed out without much change in the center of gravity since the forward edge of the cargo floor is only slightly forward of the wing's leading edge.

Not the answer you're looking for? Browse other questions tagged aircraft-design safety military emergency or ask your own question.

8
How is the cargo hold volume for passenger aircraft designed?
12
Can an armed door be opened from outside an airliner?
13
Can small airplanes be towed (or carried) as cargo to be dropped at some other location by air?
9
Why are there so many 7700 squawks?
5
How can an airliner have low altitude stall recovery?
7
How could a wood and fabric aircraft be controlled after a fabric tear mid-flight?
51
Why don't commercial passenger safety videos ever explain policy instead of merely dictating it?
10
What are the regulations regarding the safety briefings and harness designs for open-door helicopters?
0
Why are aircraft not equipped with nose cargo doors when being converted from passenger to cargo variant?